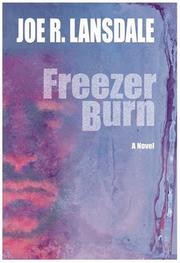 Is there anyone else on Earth that can write a sentence like this?
"The old gal had been right enough and mean enough six months earlier, but one night, after watching Championship Wrestling, perhaps due to an excitement over a particular heated contest, or an overly vigorous inhalement of gummy bears, which she stuffed into her bony body as if they were the fruit of life, she had gone to bed and hadn't gotten up again."
The fruit of life.
Priceless.
Is "inhalement" even a word? Because it is now.
FREEZER BURN is hilarious, shocking, touching, heartfelt, and heartless. Redneck noir at it's best.
Highly recommended.

Posted by The Crabby Reviewer at 8:53 PM