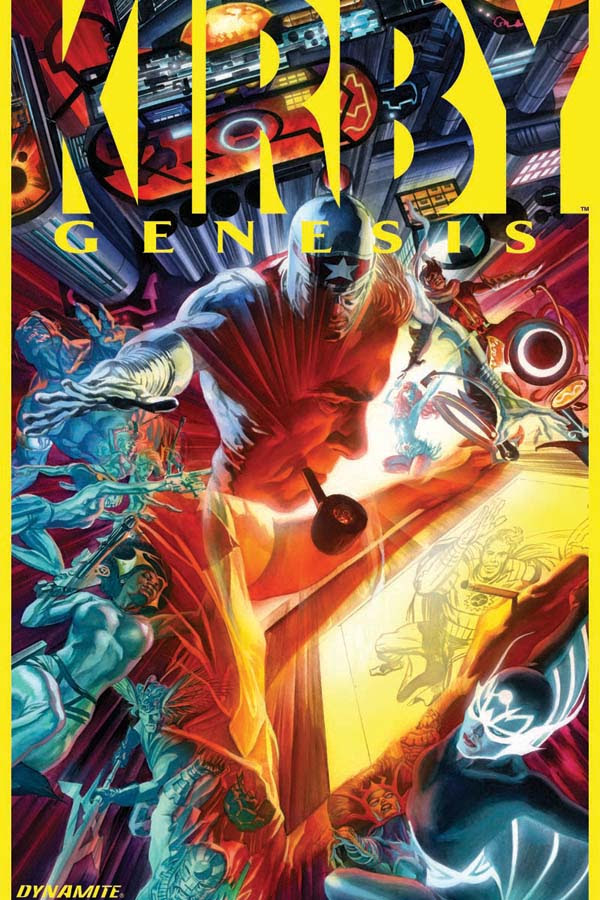 Insanely Busy (Just Like The Mind of Jack "King" Kirby Himself!)

KIRBY: GENESIS is the latest effort from the MARVELS creative team of Kurt Busiek & Alex Ross. While falling (Far...) short of the brilliance they attained with the aforementioned classic, GENESIS is fairly entertaining, for what it is. Ross and Busiek have taken on the epic task of gathering up all of Kirby's unused/dormant creations, and throwing them into a big stew pot together to create God-knows-what. The end result? One of the busiest comic-books I've ever read, and that's saying something: I'm 41 years old, and I've been reading comics since I was 2. GENESIS is overcrowded to the point where it's easily a match for CRISIS ON INFINITE EARTHS, as far as the sheer amount of characters and concepts being thrown at the reader. The difference here is that, unlike CRISIS, the reader is unlikely to be familiar with these characters, making Busiek and Ross work that much harder, as they have to not only tell an epic story, but introduce us to, literally, hundreds of disparate characters/concepts/settings. And considering the size and scope of the series, they did a remarkable job of not only reviving Kirby's long-lost characters, but of honoring the man and his artistic/creative stylings. KIRBY: GENESIS reminded me, at times of my efforts as a kid to combine my various toys into a cohesive play universe: How could the STAR WARS characters interact with my G.I. Joe's? Where did the oversized Mego's fit in? Somehow, I managed....and Busiek and Ross also manage quite nicely. I honestly couldn't give you a Reader's Digest version of GENESIS if I tried. I can,however, tell you that I had a good time reading it.

Posted by The Crabby Reviewer at 6:43 PM