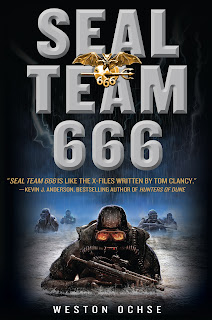 I've been a fan of Weston Ochse since his early days in the small press, with titles such as SCARY REDNECKS and SCARECROW GODS, so I was both surprised and delighted to discover that he had a new book coming out from a major Publisher. Kind of a "Small town boy makes good" feeling....I always get a kick out of seeing someone who is primarily known for small-press books get a crack at the big time. Then you cross your fingers and hope that they don't drop the ball.....

Well, Weston didn't drop the ball. In fact, he held onto the ball, scored a touchdown, did a little celebration dance, and then spiked the ball right through my head. SEAL TEAM 666 was the most fun I've had reading a Horror novel since Christopher Farnsworth's BLOOD OATH.

Everyone's heard of Seal Team 6, but are you ready for Seal Team 666? These are the guys Uncle Sam calls out for Supernatural threats to truth, justice, and the American way, such as a Demonically possessed Osama Bin Laden, who they take down in the opening chapter. The book follows ST 666's new recruit, Jack Walker, as he's thrown headlong into a world of Demons, Sorcery, mythical beasts, and word-conquering madmen. Ochse carries the action away from the predictible (Muslim terrorists), and instead give the reader a totally unexpected, but no less deadly, enemy. I won't give any spoilers, but I will say that I was very surprised by his choice of villain, and the history and mythology that he gives as background information provides a very entertaining, educational backdrop to the more real-world aspects of the book. The technical points of the team's missions are absolutely fascinating, and provide just the sense of realism that you would expect when the Author has made a career in the Military.

This a a fun, FUN book, and one that cries out to be made into an ongoing series. (And a movie!) Seal Team 666 is highly recommended.

The Publisher provided a review copy.
Posted by The Crabby Reviewer at 9:22 PM