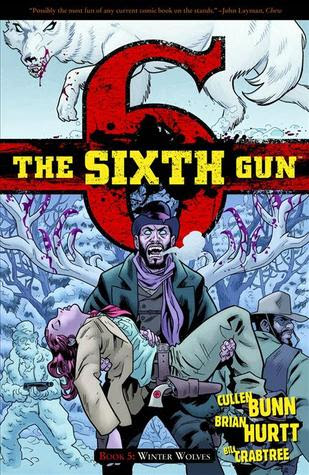 THE SIXTH GUN, over the course of its five volumes, has become one of my most anticipated books.

Which is to say, it's phenomenal.

I've always like weird westerns, so THE SIXTH GUN immediately grabbed me. I became a fan of Cullen Bunn after reading about half of the first issue. You can tell when a writer has "IT", and Bunn has "IT" to spare. I pick up everything with his name on it, with no reservations whatsoever. Artist Brian Hurtt has been confined to the pages of THE SIXTH GUN for the past few years, which is great news for his fans, but it's probably kept him from being the breakout star he deserves to be. His artwork is amazing, as is his storytelling ability. There are a lot of people who can draw pretty pictures, but few who can use those pictures to tell a linear, clear, cohesive STORY. Hurtt's art, aided and abetted by Bill Crabtree's wonderful color work, is a feast for the eyes. I cannot recommend this book highly enough.

THE SIXTH GUN tells the epic story of a sextet of cursed guns, each with a different supernatural power, and the various factions that are in pursuit of them. THE SIXTH GUN, BOOK 5: WINTER WOLVES finds our heroes, Drake and Becky, trapped in a frozen hell by a Wendigo, while their ally Gord assembles an unlikely rescue team. Cullen Bunn is slowly unraveling the history of the cursed guns, and it's really shaping up to be one of the most exciting comic-book mythologies this side of HELLBOY. I'm assuming that Bunn has an honest-to-God ending in store for this book at some point, and while I can't wait to read it, I'm also in no hurry for it to get here. (As good as this book reads in trades, I think that the eventual one-volume omnibus will be one for the ages.)

Fans who love SANDMAN, HELLBOY, and PLANETARY would do well to give THE SIXTH GUN a whirl. I guarantee that you will not regret it.

Posted by The Crabby Reviewer at 5:50 PM