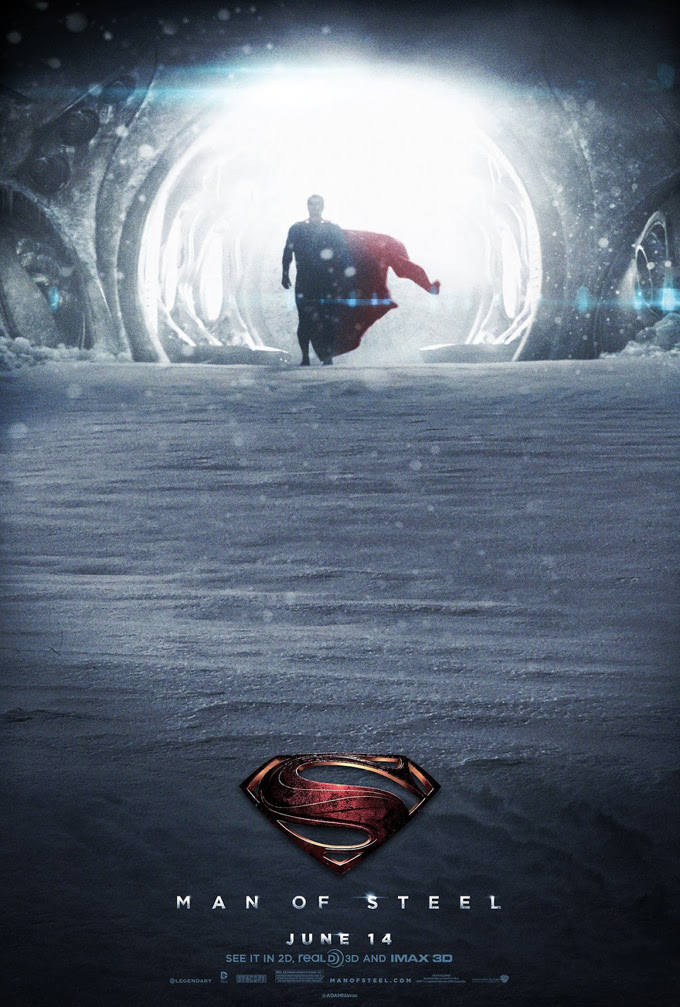 Again with the origin story....oy! Is there a man, woman, or child on the face of the Earth that doesn't know Superman's origin? At this point, after 75 years of comic books, newspaper strips, cartoons, a bunch of TV shows, a slew of movies and serials, hell, even Superman FOOD, all you need to know is this, courtesy of Grant Morrison and Frank Quitely's ALL STAR SUPERMAN: 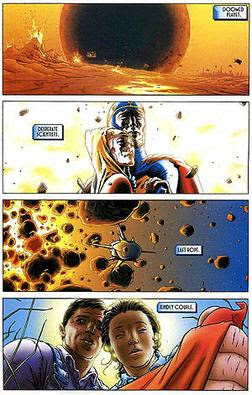 (In case it's too small, which it likely is, it says:
Doomed Planet.
Desperate Scientists.
Last hope.
Kindly couple.)

As always, there will be spoilers, so don't blame me if you read this before seeing the film. Not that there's anything in the film that could possibly surprise you.

If our attention-span-starved era MUST have reboots of every film franchise every decade or so, do we have to waste years of filmmaking time, to say nothing of hours of filmgoer's time, seeing the same damned origin every third or forth film? Yes, the Richard Donner SUPERMAN film opened over three decades ago, but it's still fresh in our collective minds. (This is still not as bad as having to suffer through another retelling of Spider-Man's origin barely a decade later. And wait until DC reboots Batman in a few years.....)

OK, on to the film: Wow, was Director Zack Snyder trying to out-do Donner with an massively long opening sequence on Krypton? This was practically a prequel film in itself. Jor-El and Lara give birth to little Kal-El (As we will discover later, this is the first natural childbirth on Krypton in centuries.), just as Krypton is ready to explode. And since Krypton is about to explode, what better time for a military coup? Enter General Zod..... 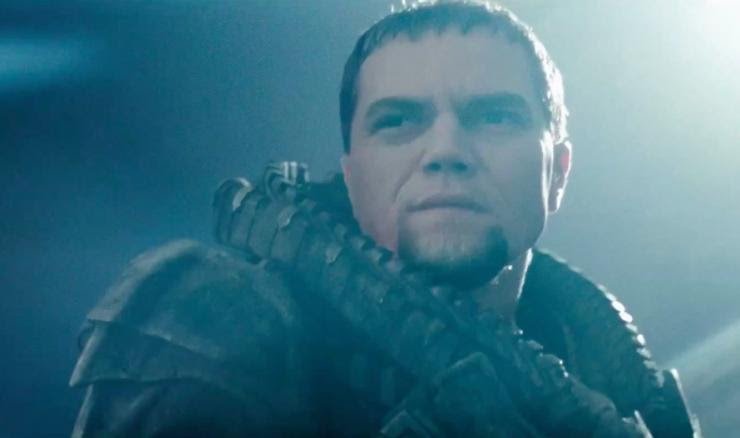 ...and again, we slavishly stick to the structure of the Donner film, as Zod and company are defeated and banished to The Phantom Zone, Kal-El is launched off to Earth, and Krypton explodes. We mercifully skip the first 33 years of Clark Kent's life (Which unfolds in flashbacks, which I oddly found to be the most effective parts of the film, thanks to the wonderfully cast Kevin Costner and Diane Lane as Ma and Pa Kent.), and jump right into the present day, as Clark is out wandering the country and using his powers to anonymously help those in need. Clark soon finds himself, in a perfect example of why I pretty much can't stand anything David S. Goyer writes, working at a top-secret military project in Canada (Thanks to "forged documents".....Good job, Homeland Security!) where he discovers that the maguffin the military is seeking is actually a ship full of dead Kryptonian colonists from 20,000 years earlier. Clark commandeers the ship, taking it up North to create what will undoubtedly become Producer Christopher (BATMAN BEGINS, THE DARK KNIGHT, THE DARK KNIGHT RISES) Nolan's boring version of The Fortress of Solitude, much like the boring Batcaves he gave us in his trilogy.

But alas, by firing up the ship, he's given himself away to Zod and company, who, freed from their Phantom Zone imprisonment, have been scouring the Galaxy looking for Jor-El's baby in order to use him to give birth to a new Krypton. (In a very MATRIX-y sequence in the beginning, Jor-El stole "The Codex", a messed-up looking Kryptonian skull that Kryptonians use to clone babies. Remember how I said there hasn't been a natural childbirth on Krypton in ages...?) Well, Jor-El stashed The Codex in baby Kal's spaceship before he was rocketed off to Earth, and Zod needs that skull back to......to....um...start up a new Krypton! This plan seems very flawed.....if Zod gets The Codex, and manages to clone a slew of Kryptonian babies, what is he going to do with them? Zod and his buddies don't seem like the types to sit around raising babies for decades. This never became any clearer to me, but I just went with it.

And that's basically it. Zod wants The Codex, which Jor-El dissolved and incorporated into Kal-El's body, so in order to facilitate this mass baby-farming scheme, Zod needs Superman's blood. So they fight.

Now, granted, this is what every Superman film has been missing: Big-ass fights.

Basically, all we've seen until now is Superman arguing with bald guys. I mean, the only fight scene we got in SUPERMAN RETURNS was Superman getting his ass kicked by the guy from HAROLD & KUMAR.

(Yes, I know we saw Superman fight Zod, Ursa, and Non in SUPERMAN II, but that film is old, mainly awful, and the effects were cheesy thirty years ago.)

So MAN OF STEEL brings the action.

I was really looking forward to seeing what the offbeat Michael Shannon could do with a character like Zod, and he's quite good, but I felt he was outgunned by his sidekick, Faora, portrayed by Antje Traue. 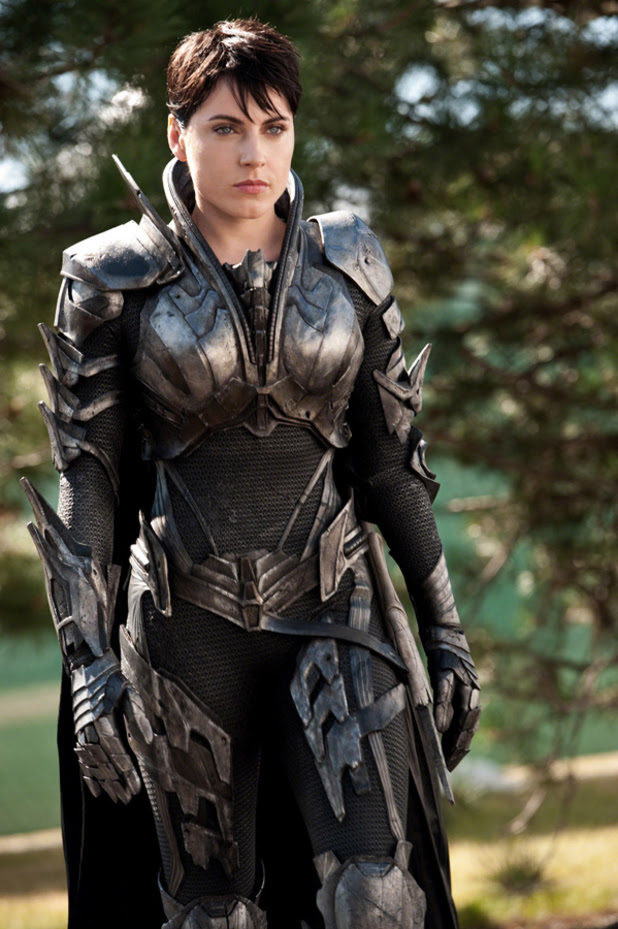 This chick is a true VILLAIN, and the film really feels ramped-up when she's onscreen. Once she's dispatched, the movie starts to bog down. Zod and company have come to Earth with a "World Engine", which they maybe borrowed from Nero after he was defeated in 2009's STAR TREK, because it looks like the exact same machine. This thing is going to terraform Earth, wiping out the population and making it hospitable for Zod and these babies he's all hot to raise.

The World Engine has two parts: One in Metropolis, and one in The Indian Ocean. They're maybe going to shoot lasers down into the Earth until they meet in the middle...? I don't know...it was never fully explained. It's just bad news, that's all you need to know. The one in Metropolis is REALLY fucking the place up, so that might be where you want to bring the fight, not the one sitting out in the middle of the ocean, but what do I know? 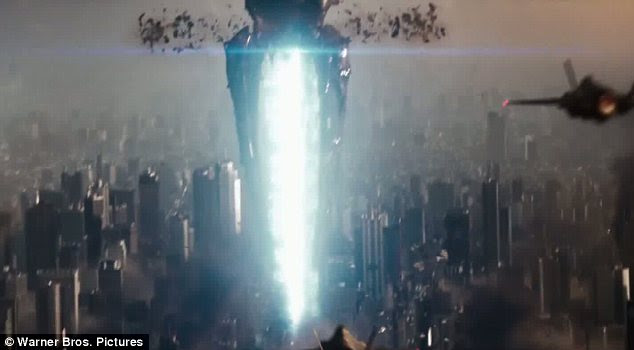 This is where my eyes started to glaze over......there's a sequence that lasts for roughly five hours, in which Superman fights the machine in The Indian Ocean. This could all have been cut out at the script stage, with a conversation that went like this:

"This is a long film....do we really need to have TWO machines? How about we just have ONE, and we lose this Indian Ocean shit"
"OK. Done."
"Great, thanks."

Superman, of course, beats his machine, and returns to Metropolis to totally rip off the end of a 25 year-old issue of MIRACLEMAN, which I'm shocked that no one has called them on yet.

MIRACLEMAN was written by the legendary Alan Moore, and in the fifteenth issue, Miracleman engages his former kid sidekick in a battle that sees London almost completely flattened, and most of it's inhabitants brutally slaughtered by the bad guy. It even ends with the same "Tortured good guy snaps the bad guy's neck" moment. Alan Moore will start bitching any moment now, I guarantee.....

When the credits started to roll, I asked my Wife if she liked it, and she said, emphatically, NO. (It's always interesting to see what she thinks of the Super-Hero films that I drag her too.....she loved THE INCREDIBLE HULK, CAPTAIN AMERICA, and IRON MAN 3, and proclaimed THE AVENGERS to be "The best time I've ever had at the movies.") For my part, I liked it, but, a day later, it's really not leaving much of an impression. It's a dour, gloomy film, and Superman really isn't that character. I would have liked a little bit more fun in the picture. A gloomy Batman is fine...not a gloomy Superman.

Henry Cavill does a good job with what he's given, but he has almost zero charisma, and no chemistry whatsoever with Amy Adams' Lois Lane. I don't think Cavill can pull off what Warner Bros. wants him to, which is anchor a massive DC film universe.

I think Amy Adams is the cutest thing going. I could watch her all day long, in anything. (I even married a girl who looks like her!) She made a good Lois Lane, but again, zero chemistry with her leading man.

Overall, I'd give MAN OF STEEL a solid 6 or 7....it's like fast food: It fills you up, but it's nothing memorable. It thankfully ends the stranglehold that the Donner film had on the character. I mean, I loved SUPERMAN: THE MOTION PICTURE when my Grandfather took me to see it in 1978, but even as a kid it seemed campy and hokey. But I don't necessarily feel that Christopher Nolan and David S. Goyer are the people to entrust with the keys to the DC cinematic kingdom. Nolan's Batman films, while praised for their "Realism" are ridiculously far-fetched and overrated. Plus, the guy can't shoot a fight scene to save his life, and grim-and-gritty is not the road to travel for every Super-Hero. I am one of the few people who actually enjoyed GREEN LANTERN, and I think MAN OF STEEL could have used some of that films humor and sense of wonder.

Posted by The Crabby Reviewer at 11:03 AM