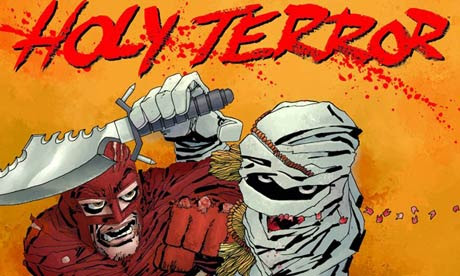 I've been a huge fan of Frank Miller since his legendary DAREDEVIL run way back when I was 10 years old. In fact, I just spent an ungodly amount of money buying the three Marvel Omnibus Editions that collect all of his DD/Elektra work, so I remain a fan. I loved SIN CITY and THE DARK KNIGHT RETURNS. 300 thrilled me. I started to question whether he was messing with me when he sequelized THE DARK KNIGHT RETURNS, because it honestly seemed like he was expressing complete contempt for his fans and the Batman character. I wasn't as offended by his ALL-STAR BATMAN AND ROBIN, THE BOY WONDER as most fans seemed, because it's supposed to be an alternate universe take on Batman, so anything goes, right? (Although it did seem incredibly simplistic and dopey, but Jim Lee's art hid a multitude of sins.....) However, HOLY TERROR has me questioning the man's sanity.

I received a review copy of HOLY TERROR from NetGalley, and thank God I did, because it spared me from spending thirty bucks on this mess. That's the best word for it: A mess. When I was a kid, I was so taken by Miller's DAREDEVIL that I spent hours creating my own comic books. Which were filled with page after page of fighting, and such dialogue as "Ughhh!" and "JESUS CHRIST!"
Reading Miller's HOLY TERROR is akin to seeing one of my childhood attempts at creating a comic book published. It's moronic, overly simplistic, insanely Xenophobic, and offensive to the senses on every level. HOLY TERROR began life as HOLY TERROR, BATMAN!, and was either ditched by DC Comics, or repurposed by Frank Miller, depending on who you believe. I can only imagine DC seeing this mess and fleeing in a terror of their own. The book seems like an overly earnest attempt at expressing the anger and anguish of 9/11 as channeled through a prepubescent, mildly retarded boy. Miller's SIN CITY style is again on display, and the art is at times fiendishly complex and savagely beautiful, but again, and I can't say this enough, it's in service of a story that seems like it was written by a disturbed, angry child. Don't waste your money.

Posted by The Crabby Reviewer at 6:41 PM