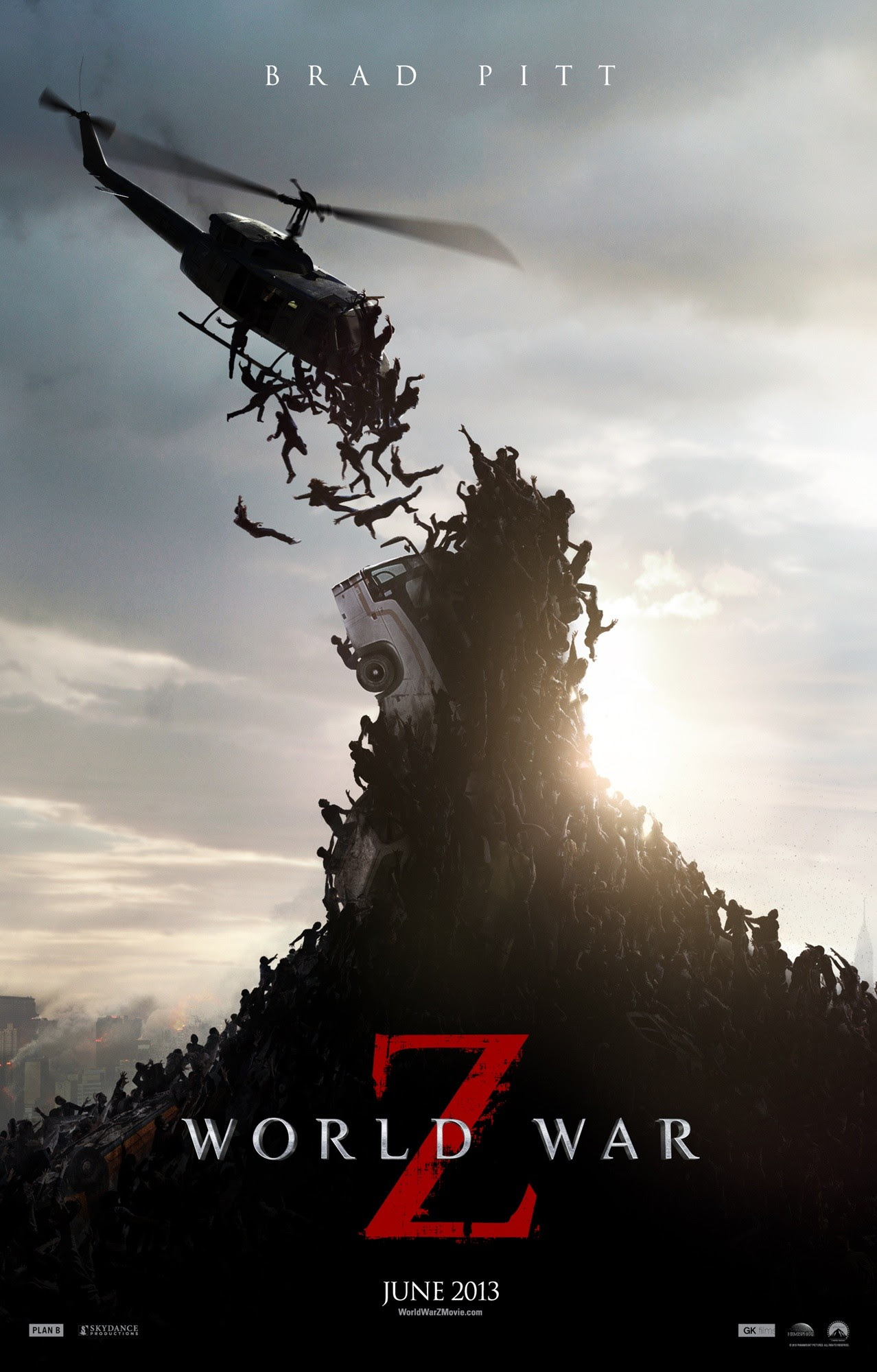 I think I've seen too many movies. Either I've totally lost the ability to enjoy movies (I haven't seen a movie all year that I really enjoyed...), or else Hollywood has been making really shitty movies lately.

Or, more shitty than usual.


Brad Pitt's long-delayed, troubled production of WORLD WAR Z has finally arrived, and much like last weeks MAN OF STEEL, and IRON MAN 3, and STAR TREK: INTO DARKNESS, and THE HANGOVER 3, and EPIC, I'll probably forget all about it in a day or two.

Brad Pitt plays Gerry Lane, some kind of retired United Nations worker (Either they never really explained what it was he did, or I just didn't register it at all.) who is drawn back into service when the Zombie apocalypse breaks out. That's pretty much the whole film. Gerry and his family are scooped up and taken to safety on a fleet of United Nations ships in the middle of the ocean, where Gerry is basically told "Stop this outbreak, or we're gonna kick your family off this boat."

And so begins Brad's trip to Korea. Where's he's told by David Morse in a cage "You wanna know what's happening? Go to Israel." So he goes to Israel, where he gets a lead that sends him to England. It's like a huge-budget "Where In The World Is Zombie SanDiego?

There are some neat set-pieces, but they both occur REALLY early on in the film, and then it's mainly people talking. And talking. And talking. Then the movie looks like it ends, visually, but there's a voice-over helpfully telling us that it's not over, it's just the beginning. Considering how much this movie cost, and all of the reshoots and rewrites and test screenings, compared to the mostly empty theater I saw it in, I can pretty much guarantee that it IS over.

Brad Pitt does a good job with what he's been given. I feel like he's almost exactly the same in every film, but he has enough charisma and likeability that it doesn't really matter. No one else comes out of this as anything close to memorable or compelling, mainly because there really IS no one else in it. There's Lane's Wife and kids, who mainly exist to be a passive-aggressive threat to be held over him, and his former U.N. boss, and there's also LOST's Matthew Fox, who has a few brief never-really-shown-in-full appearances that suggest he was a casualty of the rewrites and reshoots. Those rewrites and reshoots give the film a disjointed, cobbled-together feeling, so it never gelled with me. My final thought, when the credits rolled, was "Well, that was a fucking mess."

WORLD WAR Z was partially written by Damon Lindelof, who, after PROMETHEUS and STAR TREK: INTO DARKNESS just needs to stop. Really, please STOP. It was directed by Mark Forster, who directed QUANTUM OF SOLACE, which was fucking dreadful, so maybe he needs to stop, too. There's a really conspicuous absence of blood, which is mind-boggling in a film about a massive, world-ending Zombie apocalypse. That this film is rated PG-13 is also mind-boggling, as is the fact that idiots were bringing REALLY little kids in to see it. Which is probably what the studio was shooting for when they finished editing it into it's bloodless final cut: Get a kid-friendly rating, so we can get as many people in on opening weekend, before the bad word-of-mouth starts.

I've seen worse films, and there are those two really good action scenes to recommend, but that's about it. Stay home and watch the GOOD Romero Zombie films (NIGHT OF THE LIVING DEAD, DAWN OF THE DEAD, and DAY OF THE DEAD...skip anything after those three!), and maybe throw in Zack Snyders remake of DAWN OF THE DEAD and Danny Boyle's 28 DAYS LATER to get your fast Zombie fix in....You''ll be much happier.Or else read Max Brooks' novel, which you can order below.....

Posted by The Crabby Reviewer at 3:20 PM