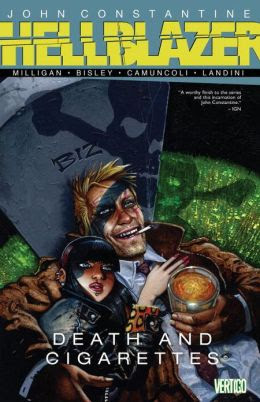 Longtime readers of my Blog (All one or two of you!) will have heard me comment on how far behind I am in my comic reading. I have unread issues of HELLBLAZER that date back to before I met my Wife. (That's over 8 years ago....) So it was kind of a cheat to skip all of those issues and read John's final collection, JOHN CONSTANTINE, HELLBLAZER: DEATH AND CIGARETTES, but I had no other choice.....DC had sent me a review copy, and it was going to expire within the week, so I took the plunge and read it, hoping for the best....

Being so backed up in my reading makes buying comics a real gamble.....I drop and pick up books based on the creative team, and when Denise Mina took over the writing chores on HELLBLAZER, it seemed like a good time to jump off of the book, sight unseen. I decided to sit out the Peter Milligan era, as well, although I did pick up the arc that featured Shade, The Changing Man, a book that I dearly loved back in the day. I'm happy to say that it doesn't seem that I've really missed much by skipping all of those Milligan issues. John Constantine is now married to a twenty-something named Epiphany (Piff, for short), and he's a hell of a lot older (Unlike other characters, John's creative teams have kept him aging in real time, so he's now in his early-to-mid-sixties.), but he's still the same trouble magnet he's always been. Seeing as this is John's last hurrah under the Vertigo imprint ( Vertigo is being phased out by DC, in favor of returning all of the company-owned characters to the "New 52" universe, so we can now enjoy a younger, watered-down Constantine exclusively. DC hates mature, thought-provoking stuff! Away with you, old people!!), I was hoping for an epic finale that would give John a grand sendoff before he was rebooted into oblivion.

This ain't that grand sendoff.

Don't get me wrong...It's a big collection, and it's certainly not terrible, but it's not exceptional, either. It's filled with the same mediocrity that's marked much of Milligan's output over the past decade or so. The stories are competent, but as a finale to a long-running series (Around a quarter of a century!), it's a massive letdown. The stories contained in BLOOD AND CIGARETTES could have fallen anywhere in John's chronology. There's no sense of an ending coming, it's just a series of unrelated adventures stacked up on each other. The finale left me baffled, especially considering how new-reader friendly the bulk of the book was. I literally have no idea what they were trying to convey on the last page.

Not a terrible book, and it's certainly worth the cover price, considering how many issues it collects.  But Vertigo really missed the opportunity to give John a worthy last adventure, though.

Posted by The Crabby Reviewer at 3:53 PM