To Infinity...AND BEYOND!!!, Part Three: The Infinity War 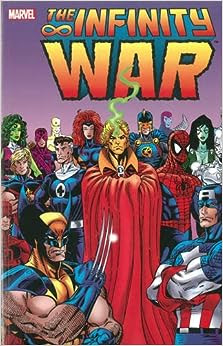 As big a Jim Starlin fan as I am, this didn't quite hit the mark for me.

THE INFINITY WAR springboards out of Adam Warlock's time as owner of The Infinity Gauntlet. Warlock, in order to make himself a perfect deity, uses The Gauntlet to purge himself of all aspects of good and evil. That action leads to the return of The Magus, Warlock's evil future self, who was eradicated from existence when Warlock altered The Magus' past, thereby eradicating the timeline that led to his creation. (Yes, The Magus is one of the more convoluted characters in The Marvel Universe.)

The Magus embarks on a goofy plan to conquer all existence, and although I've been reading comics for my entire life, and have a really high threshold for belief-suspension, I could barely make heads or tails of his plan. The book basically starts out with The Magus, for all intents and purposes, as an omnipotent being. We learn that he has been plundering alternate realities and stealing their versions of The Cosmic Cube...so the fact that he holds five different Cosmic Cubes isn't enough for him. No, he also wants The Infinity Gauntlet. To accomplish this, he embarks on a complex, byzantine scheme that involves sending weird duplicate versions of every superhero on Earth to fight the originals, while he maneuvers beings that should know better (Galactus, Eternity, The Living Tribunal, The Watcher...) through hops that he has set up...to what end? I have no idea. The Magus pretty much spends all six issues of THE INFINITY WAR sitting around ranting and raving to his duplicate Thanos about the brilliance of his plan, even going so far as to offer up the Metatextual observation that the doppelganger battles (I.E. the crossover issues, of which there were, by my count, over 48...) don't really mean anything, and are just there to occupy the other heroes. (In other words, to make that fat crossover money. The feeling that the Marvel Universe was forced into this story by editorial edict runs deep. I suspect that this was meant to be a WARLOCK AND THE INFINITY WATCH story, and was co-opted by Marvel's newly-acquired taste for mega-crossovers.) The portions of the story that concern Warlock and Thanos flow along smoothly...it's more of a slog when The Avengers and The Fantastic Four and all of the rest get involved. Although the plot is as muddy as hell, and the main story is terribly bloated , Starlin and artist Ron Lim deliver some truly epic moments, such as The Magus' abduction of Adam Warlock, and The Magus' final fate. The main story ends with a half-hearted resolution that leads directly to the NEXT massive crossover, THE INFINITY CRUSADE, which is out-of-print, and so will not be included in my INFINITY marathon.

The rest of this collection fares better than the main portion. Following THE INFINITY WAR #'s 1-6, we are presented with WARLOCK AND THE INFINITY WATCH #'s 7-10, which, while not fully-fledged stories, depict moments that got short-changed in the main mini-series, such as Gamora's attempt to revive Eternity, or Thanos' battle with his doppelganger. Nothing essential to the main story, but Starlin delivers some nice character beats. The Gamora issue works especially well, as it offers up more about a childhood spent with Thanos as a father.

This is followed by portions of MARVEL COMICS PRESENTS #'s 108-111, by Jim Starlin and artist Shawn McManus, which depicts a between-panels meeting between Thanos and Mistress Death, which, while not essential to the main story, certainly added a lot more depth to the already rich character of Thanos.

There's also a Thanos /Gamora story from MARVEL HOLIDAY SPECIAL #2, which is not listed anywhere among the contents. It's a short , powerful piece depicting a pivotal moment from Gamora's childhood, which is also collected in THE INFINITY WAR AFTERMATH, and looks much better in that book. The version here appears to be scanned, and the colors are very dark and muddy. Kudos to Marvel for leaving no stone unturned, and including everything relevant to THE INFINITY WAR here. There's even a listing of all of the crossovers, along with a brief synopsis of the issues.

There are a lot of reviews complaining about the way that the issues are collected here, which is pretty much the same way that THE INFINITY GAUNTLET OMNIBUS ordered its contents: The mini-series, followed by tie-in issues in as close to chronological order as possible. Personally, I get why Marvel used this approach, because if the printed the entire contents of the book chronologically, it would detract from the main series. This way, you can read the main storyline, and enjoy the tie-in issues as deleted scenes. Or, you could read them chronologically by skipping around. I think Marvel made a wise decision by ordering the contents the way that they did.

Overall, this was a decent enough book, with some great crowd-pleasing moments. I would love to hear Starlin's take on the scope of this crossover, and see if it was really foisted on him, as I suspect it was. The Starlin completest in me is glad that I picked this book up, but it was, at times, a chore to keep reading.

Next up: THE INFINITY WAR AFTERMATH. Stay tuned.....

Posted by The Crabby Reviewer at 1:02 PM