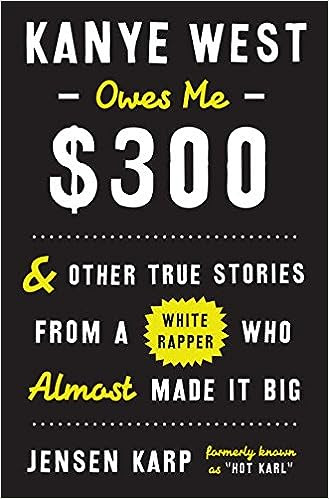 The Hilarious Story of a Stifled Career....

I have to admit, my insane hatred for Kanye West is what made me want to pick this book up. I had never heard of a rapper named Hot Karl, but the title of this book, and the promise of the author dishing the dirt on Kanye, proved to be an irresistible combination. Who would have guessed that Jensen Karp's autobiography would turn out to be both hilarious and inspirational?

Karp's story, on the surface, could be viewed as a kind of epic tragedy: A young white boy from an affluent neighborhood grows up listening to rap music, and finds that he has an aptitude for it. Through a series of serendipitous encounters, he is given a chance that any emerging artist would kill for: A million dollar record deal with Interscope. After a whirlwind honeymoon period, where money was no object, he records what could have been an amazing album, filled with famous and soon-to-be-famous guest performers, only to find the album shelved and his career cut short, supposedly because of another, more popular, white rapper's interference.

This description would lead you to believe that you're about to read a memoir by a stifled, bitter almost-was, but the truth is that Jensen "Hot Karl" Karp is a funny, well-adjusted man who seems truly appreciative of the opportunities that he was given, and finds the humor in some of the truly unusual situations that he has found himself in.

Karp peppers his story with random celebrity encounters, stories from his recording sessions, and funny anecdotes about how his family and friends perceived his burgeoning career. He also has sections devoted to some of his songs, including annotations. I'm sitting here now listening to some of Hot Karl's music, and I have to say, I really like it....aside from the humorous slant of his lyrics, I really don't see any similarities to Eminem...Karp has a totally different voice and delivery, and he doesn't come off as any angry, entitled douchebag like Marshall Mathers does. Give me Hot Karl any day of the week.

The only complaint that I have about this book is that it was too short...I would have liked a few more chapters detailing what Karp has been up to since his rap career ended. The book's Postscript and "About the Author" page gives a little information about what he's been up to (Including writing for The WWE and co-owning an art gallery), and it seems like he's landed on his feet, but I had such a good time reading his book that I didn't want it to end. Hopefully, he's got enough left for a sequel.

Posted by The Crabby Reviewer at 11:27 AM