Fresh Off The Boat, by Eddie Huang 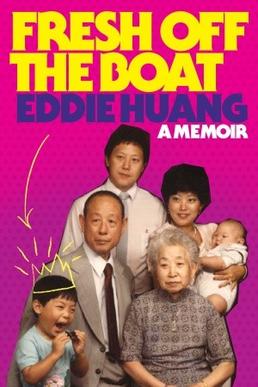 My daughter and I are both big fans of ABC's Tuesday night comedy, FRESH OFF THE BOAT, and when I received a review copy of Eddie Huang's upcoming book, I figured that it would be a good excuse to pick up a copy of his first book, acquaint myself with his story thus far, and see where the inspiration for the TV show comes from. I should have left well enough alone.

First off, I have to disclose a pet peeve of mine: I grew up in The Bronx, and I was raised in a true melting pot of virtually every race, religion, and culture that you could possibly imagine. My classrooms were filled with Jewish kids, Russian kids, black kids, Hispanic kids, Asian kids, Italian kids, Irish kids, Cambodian kids....I was raised among so many diverse people that I just naturally became accepting of, and tolerant toward, people that were different than I was. That said, I absolutely hate people who purposely adopt the mannerisms of another culture because they think it makes them hip. There's nothing that irks me more than seeing some old guy say something is "fly" or "dope" or "ill". I grew up in New York City when rap and hip-hop were being created, when break-dancing was all the rage, and I didn't talk like that back in the '80's, let alone now. So to read about a rich Asian kid, who grew up in Orlando, Florida, and have nearly three hundred pages of outdated street slang was akin to pure torture to me.

I imagine that no one at ABC actually read this book, because it is really doesn't lend itself to thoughts of a cute, wacky family situation comedy. The lovable father from the show was, in reality, a former gangster who delighted in beating his children with a whip and pointing a loaded gun at them. The fierce, loving sitcom mother also beat her kids, to the point where they were almost taken away from her. Eddie wasn't an adorable little scamp, but a violent-tempered asshole who dealt drugs and reveled in destructive behavior.

I read a lot of non-fiction, and there's usually an arc to these stories that finds even the most unsavory person reaching a "Come to God" moment, where they realize that their behavior, the way that they're living their life, is just untenable, and then the remainder of the book will chronicle their attempt to turn their life around. I have to give this to Eddie Huang: He doesn't give up. He continues to be a vile, loathsome asshole who rails against everything that isn't exactly the way that he wants it to be. He complains about people who tell him to "Go back to China", but after about one hundred instances of reading "Fuck white people!" or the ever-popular "Fuck America!", I can see why people would tell him to take a hike.

The irony of a rich person basing their whole life on acting like they were from the mean streets aside, Huang just doesn't get the most basic principle of life: That not everything is fair. He complains about being told that he's ugly over and over again, but....Sorry, you're ugly. I'm no Brad Pitt, either. I've been called names my whole life. I'm overweight.....My appearance has cost me in job interviews. I've had blind dates open up the door and give me that "Oh, shit." look when they first see me. Most people aren't good-looking.....move on. He bitches about white people co-opting Asian food and ruining it, even as he adopts the trappings of black culture, complete with Orlando slang that was outdated when I left The Bronx in 1988.

The book lovingly chronicles his adventures as a drug dealer, his endless street fights (I find it hard to believe that a short, pudgy kid like Eddie was anywhere near as tough and unbeatable as he makes himself out to be.....), his stoner school days...The further you get into the book, the more loathsome you start to find Eddie. He got his big break on a Food Network cooking show, but...Fuck The Food Network, they're assholes. Guy Fieri encouraged Eddie to make food a career, but fuck Guy Fieri, because he's a phony asshole. No one is good enough for the great Eddie Huang.

The book ends with Eddie opening his restaurant, and rather than give his readers the hope that, maybe, just maybe, he was growing up a little bit, he relates how he, along with a bunch of friends, smoked pot in the restaurant one night, telling customers to get their food to go, unless they wanted to stay there and get high with him. This guy is the true definition of a delusional, entitled scumbag. I am so sorry that I agreed to review his new book. Pray for me.....