To Infinity...AND BEYOND!!!, Part Two: The Infinity Gauntlet Aftermath 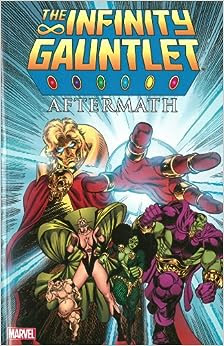 A spotty, but worthwhile, collection.

Marvel has been knocking it out of the park with their collected editions.....For patient fans who are willing to assemble books like pieces of a jigsaw puzzle, complete runs of a ton of classic storylines are out there for the taking. THE INFINITY GAUNTLET AFTERMATH is one of those jigsaw-puzzle books. Following on the heels of Marvel's THE INFINITY GAUNTLET OMNIBUS, this collection continues almost seamlessly from that volume. (There are a couple of overlapping stories- THE SILVER SURFER #60 and DOCTOR STRANGE, SORCERER SUPREME #36 are collected in both volumes, as well as a few pages from THE SILVER SURFER #'s 57-59, but their inclusion makes this a more accessible volume for people coming into the story cold.) The mission of this collection is to tie up the loose ends of THE INFINITY GAUNTLET, and it does that admirably.

After the aforementioned SILVER SURFER and DOCTOR STRANGE issues, we follow Adam Warlock, now in possession of The Infinity Gauntlet, as he stands trial before The Living Tribunal and a host of cosmic beings who believe that he must be stripped of the Gauntlet's power. Warlock comes to an agreement with his accusers: He will break up the power of The Infinity Gauntlet by safeguarding each individual gem with a worthy guardian. Unfortunately, Warlock's definition of "A worthy guardian" differs greatly from mine, and he forms a team comprised of himself, Moondragon, Pip the Troll, Gamora, Drax the Destroyer, and a mysterious sixth member. Stable these people ain't. This volume collects the first six issues of WARLOCK AND THE INFINITY WATCH, which I bought in floppy form back in 1991 and 1992...I remember thinking that the book was kind of slow back then, but it held up really well now. The art is a mixed bag, alternating between the dynamic, grossly exaggerated pencils of Angel Medina and the bare-bones, no-frills pencils of Rick Leonardi. Medina's art was like nothing I'd ever seen before back when these issues were first published, and it stands up well to this day. Leonardi's art also holds up well, but looks kind of plain when alternating with Medina's. Writer Jim Starlin's cosmic storytelling is, as always, top notch, if a tad predictible. This being a Warlock story, we get the prerequisite High Evolutionary/Counter-Earth storyline, which always makes my eyes glaze over, but he was even able to make that snoozer of a character hold my interest.

The rest of the book isn't nearly as compelling or enjoyable, collecting Ron Marz and Ron Lim's THE SILVER SURFER #'s 61-66, and material from THE SILVER SURFER ANNUAL #5. I've seen other reviews online complaining that these issues had almost nothing to do with THE INFINITY GAUNTLET, but they do serve a vital purpose: THE SILVER SURFER #'s 65-66 tell an INFINITY GAUNTLET-related tale, and Marvel has collected the other issues in order to give collectors an unbroken run, which I really appreciate. These issues are by no means essential reading, but the last two issues show The Surfer destroying Thanos' monument to Death, so they do serve a purpose in this collection. The rest of the Surfer issues are typical of Marvel's 1990's output, and are what I think of as "1990 Regular-Guy Team" issues: Marvel was filled-to-the-brim with bad-guy teams comprised of regular-looking men and women who had no code-names (They used their regular names...), and all dressed in similar jumpsuit-looking costumes. The team that The Surfer goes up against are "The Collection Agency", minions of The Collector. 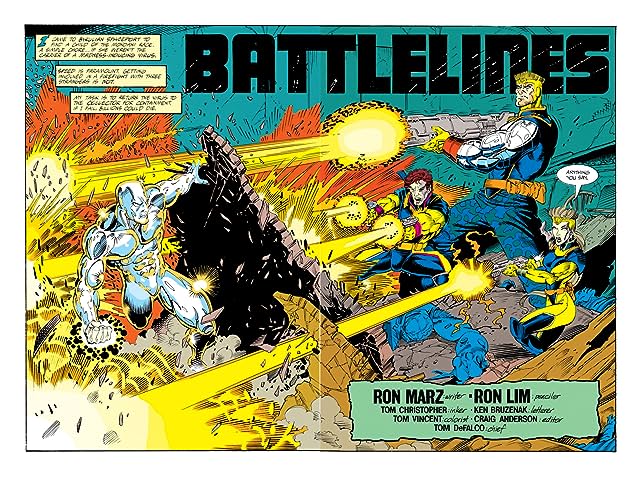 These people are imaginatively named Janus, Jude, and Sharra.....

Compare them to THE UNCANNY X-MEN foes "The Acolytes":

One guy is named after an Indian chicken dish, and another is named "Mellencamp".....scary!

Ill-conceived characters like these were all over Marvel back then.....

As I said, this is fairly inconsequential stuff, but writer Ron Marz delivers a compelling Silver Surfer, and Ron Lim's art is always a joy to behold. The back-up material from THE SILVER SURFER ANNUAL that is included here presents a fun little Pip the Troll story, and another story that gives further closure to THE INFINITY GAUNTLET by tying up the loose end that is Nebula.

There's also a pretty nice Jim Starlin pin-up from the Annual that's included, some Ron Lim original art pages, and a handful of letters page ephemera, as well as a small MARVEL AGE article about WARLOCK AND THE INFINITY WATCH.

Not essential reading, but (mostly) fun stuff that bridges the gap between THE INFINITY GAUNTLET and THE INFINITY WAR.

Posted by The Crabby Reviewer at 2:15 PM