The Price of Fear: The Film Career of Vincent Price, in His Own Words, by Joel Eisner 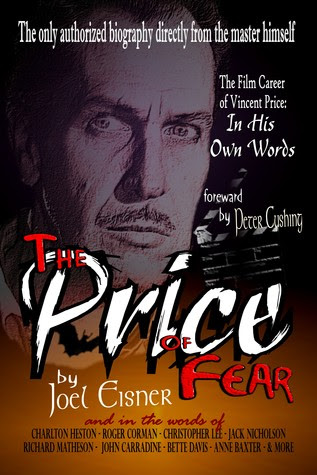 A biography worthy of the master of cinematic terror...?
Sort of.

I was raised on Vincent Price films. I have great memories of watching his films after school on the channel 7 4:30 movie in The Bronx. They would run week-long marathons of the Poe films that he starred in, and I would rush home from Kindergarten to watch them with my Grandma May, who was terrified by them...she often watched them with her hands over her eyes. To this day, Price is probably my favorite film star, and I can't pass a Vincent Price film on TV without stopping and watching it. As much as I love the man, I really never knew much about his personal life, aside from the fact that he was a serious art collector.

THE PRICE OF FEAR: THE FILM CAREER OF VINCENT PRICE, IN HIS OWN WORDS is clearly a labor of love for author Joel Eisner. Price passed away in 1993, but he had already been working with Eisner on putting this biography together. Unfortunately, all that Price saw of it before his death is the beautiful foreword by Peter Cushing. (The book was finally published in 2013...I would love to hear the story behind the decades-long delay.)

As I said, Eisner is obviously a fan, and his enthusiasm for Price and his work shows on every page. The book tells Price's story in his own words, and through interviews with people who worked with him, such as Charlton Heston, Roger Corman, Christopher Lee, Jack Nicholson, Richard Matheson, John Carradine, Bette Davis, Anne Baxter, and many others. The book covers Price's career exhaustively, touching on almost every film that he worked on, and many of his TV and radio appearances. There's also a large section of photos from throughout Price's career, but no personal pictures, unfortunately. Price seems to have been one of those rare souls that no one has a bad thing to say about, and it did my heart good to know how proud he was of his Horror work, unlike many actors who look down on those types of films.

Eisner has a tendency to waste large amounts of space with overlong descriptions of Price's films, often giving a complete synopsis of the entire movie, and those parts of the book practically caused my eyes to glaze over. Another unfortunate aspect of the book are the massive amounts of spelling, punctuation, and grammatical errors. I proofread professionally, and I can't stress enough how important it is to the finished product to have someone, often many someones, go over a manuscript with a fine-tooth comb. It makes a book look cheap and unprofessional, especially when there's an error on the cover (Peter Cushing's Foreword is called a "foreward" on the cover and a "forward" inside the book...). Stuff like that drives...me...nuts....In fact, if I wasn't such a huge Vincent Price fan, I would have seen that word on the cover and passed on this book entirely.

Production issues aside, this book is a really fun read, and fans of Vincent Price will find much to enjoy within its pages.


Posted by The Crabby Reviewer at 4:55 PM