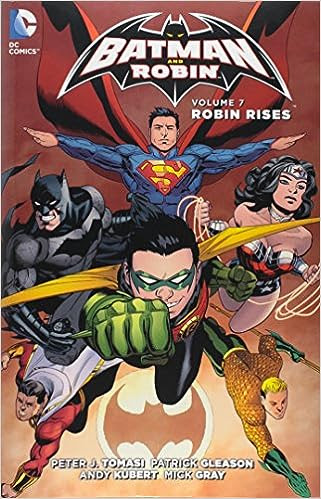 Yeah, it happens in a totally over-the-top, ridiculous way, but one of my favorite characters in recent memory is back, so who am I to complain...?
When last we left Batman and Robin (In BATMAN AND ROBIN, VOLUME 6: THE HUNT FOR ROBIN, review here), Robin's corpse had just been stolen and spirited away to Apokolips by Kalibak and Glorious Godfrey. Why? Who can remember? And since DC doesn't do recaps of any kind, I was on my own when BATMAN AND ROBIN, VOLUME 7: ROBIN RISES, opened. Batman, clad in a new suit called "The Hellbat", has opened a Boom Tube, and is taking the fight to Darkseid's hordes of minions while looking for Damian's body.

None of this really made a lick of sense to me, because not only could I not remember why Godfrey and Kalibak would want to steal the corpse of an Earth child, but I also had no idea what a "Chaos Sliver" was, why Batman had it, or what it had to do with anything. (None of this was helped a bit by Patrick Gleason's art....He can certainly draw, but he can't tell a clear visual story to save his life, and I had to spend a lot of extra time lingering over certain panels to figure out what he was trying, unsuccessfully, to convey.)

Batman is soon joined on Apokolips by Cyborg, Batgirl, The Red Hood, and Red Robin (YUM!), none of whom should have lasted ten seconds there. Somehow this "Hellbat" suit gives Batman crazy strength, which drives me nuts because...why not wear it all the time, instead of risking your life in the regular suit? But, whatever.......It's a comic. Of course, Batman ends up going toe-to-toe with Darkseid, and using the Hellbat suit to beat him to a pulp. (Again with the Deus Ex Machina suit!) To me, seeing Batman pretty much lay waste to Apokolips and trash Darkseid single-handedly puts a major crimp in Geoff Johns' big JUSTICE LEAGUE "Darkseid War" storyline. If one regular guy can kick Darkseid's ass, it kind of invalidates the big threat that he's meant to pose to the Justice League. Plus, I hate the fact that Darkseid is so tall. It's ridiculous.

Since the book is titles "Robin Rises", and he's pictured on the cover, I don't consider it a spoiler to say that Robin does, indeed, come back to life. Something about the preposterous way that he is resurrected gives him Superman-like powers, and he spends the remainder of the book learning how to use them. Plotwise, it's pretty disposable stuff, but writer Peter J. Tomasi makes it worthwhile by filling the pages with some great character interactions between Batman, Alfred, and Damian. The book ends with an absolutely random, ridiculous story that finds Batman and Robin ON THE MOON fighting shape-shifting aliens.

This is a book that truly captures that weird '60's "anything goes" vibe....From Apokolips to Atlantis, from The Watchtower to The Moon, no place is off limits, and anything goes. I'm glad I bought this book, so I could see how Damian came back, but there wasn't enough here to get me to come back for Volume 8.

Posted by The Crabby Reviewer at 4:08 PM