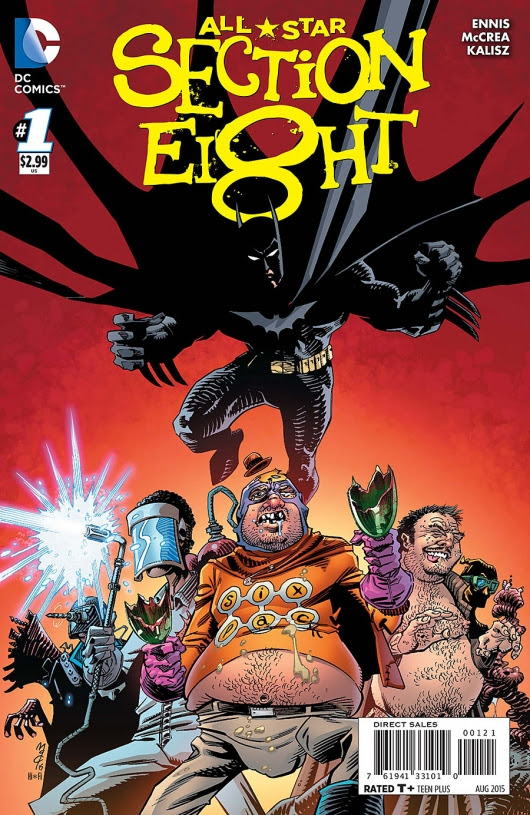 Yeah, pretty much so.

I'd go as far as saying that Garth Ennis and John McCrea's ALL-STAR SECTION EIGHT is one of exactly TWO books I've read this year that I consider absolutely perfect. (The other is Grady Hendrix's MY BEST FRIEND'S EXORCISM.)

In ALL-STAR SECTION EIGHT, Ennis & McCrea resurrect the late, lamented "Super-team" Section Eight, last seen going down in a blaze of glory at the conclusion of their HITMAN series. Team leader Sixpack finds himself alive again, back in "Noonan's Sleazy Bar" (Yes, that's the name on the sign...), and compelled to assemble a new and improved section Eight to combat an unknown threat that is coming.

The new team, comprised of Sixpack, the new Dogwelder, Baytor, Powertool, The Grapplah, Guts, and the returning Bueno Excellente, find themselves one member short of the mandated eight, and set out to recruit the last member from the ranks of The Justice league, leading to the kinds of sick, twisted scenes that the team of Ennis & McCrea are know for.

Leave it to that Bastard Ennis to go for more than just the cheap gross-out or lowbrow laugh. By the end of this book, I was moved nearly to tears, which I was NOT expecting. The final chapter is beautifully written, conveying a depth of emotion rarely seen in comics these days. A comic starring Bueno Excellente was the last place that I would expect to find a touching, thoughtful treatise on what it means to be a hero, but I should have expected the unexpected from Ennis, who rarely lets me down. This is a book that I will not forget any time soon.

ALL-STAR SECTION EIGHT collects all six issues of the mini-series, plus the short story from CONVERGENCE: HARLEY QUINN #2, with the John McCrea variant cover from the first issue of the mini-series. I can't recommend this book highly enough.