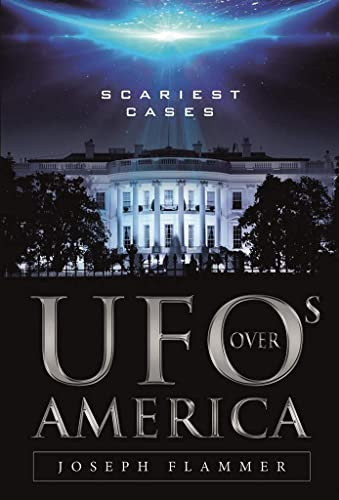 I'm not sure if I believe in UFOs or not. On the one hand, it would seem stupid and egomaniacal to assume that we're it in all of the universe. On the other hand, are aliens really appearing to a handful of people and anally probing them? Ghosts, Cryptids, UFOs....As cool as it would be if these things existed, I don't really want to throw my lot in with some of the people that say they exist. Enter Joseph Flammer, author of UFOs OVER AMERICA: SCARIEST CASES....

Flammer almost immediately makes a couple of statements that caused me shut down my objectivity altogether: He's not just writing about UFOs, he's not just investigating them, he's also been abducted by them. He's being stalked by aliens disguised as humans, he see spaceships and aliens all of the time, he's been physically marked by aliens...(I used to "talk" to people like this all of the time when I took the subway to and from work in Manhattan.) He says a little later, completely out of the blue, that he believes that aliens will visit Earth one day with a "Silver man-eating machine". Wow. It's hard to take someone seriously as a (self-described) "award-winning reporter" after reading that. There are no facts to back any of this up, mind you. I have no idea where he got the idea for the "man-eating machine" from, because he abruptly mentions it, then drops it entirely, never to be brought up again.

Another red flag is the ungodly amount of spelling and grammatical errors in this book. It's a mess, and that makes everything you're reading seem less valid. In the space of a few pages, Flammer refers to noted UFO researcher Stanton Friedman as Freedman, Freidman, and Friedman. Later, he repeatedly references alleged abduction victim Travis Walton's Ketone levels, spelling it "Keytones". I proofread professionally, and I can tell you that when I see stuff like this in  book, it loses all credibility with me, especially if the book is (allegedly) non-fiction reporting. (I'm available to proofread, Schiffer! Call me!)

Flammer goes on to recount some of the most famous cases of UFO sightings and alien abduction, using other books and interviews as references. The problem with this is that I felt like I was reading a Reader's Digest version of those books. You'd probably be better off reading those books instead of this one, because you might get a more professional account, rather than one peppered with opinions presented as facts, with liberal doses of Flammer's personal beliefs regarding what aliens want, and why he thinks that the U.S. government is secretly fighting them to protect our freedom. (Which, I will admit, is a nice change from most UFO theories, which place the government firmly in bed with the aliens.)

I have to admit, I did have fun reading this book, but it also made me feel a little bit like I was listening to the unhinged ramblings of someone who is obsessed with the subject matter. Did Flammer get me to see things his way? No. But...Flammer suggests that the curious have only to look to the skies and invite the aliens to visit them, and they will. Will I be doing that? Absolutely not. True or not, I ain't taking no chances....

Posted by The Crabby Reviewer at 3:07 PM