MARVEL MASTERWORKS, VOL. 252: THE INCREDIBLE HULK collects THE INCREDIBLE HULK #'s 184-196, and features the last issues of Herb Trimpe's incredible run as the book's artist, and the beginning of Sal Buscema's even more incredible tenure. This volume continues the long-running subplot of Glenn Talbot's capture by Russian soldiers, with no end in sight. I love it. It is almost unthinkable to imagine a subplot going on this long in a modern comic-book. In fact, sub-plots have been almost entirely eradicated in favor of monthly books being "written for the trade". I've pretty much dropped out of reading new comics, but the lack of a supporting cast and ongoing sub-plots has been a longstanding complaint of mine over the past decade or so....When I was younger, I kept coming back month after month not only to see what the title character was up to, but also to check in on his friends and family. A rich, diverse, interesting supporting cast can add so much to a book. I wish Marvel and DC would learn that lesson...

But, putting aside old-man laments, this is another solid outing, helmed entirely by writer Len Wein. (The lengthy introduction is by Dewey Cassell, and provides a lot of insight into artist extraordinaire, Herb Trimpe.) This time out, The Hulk fights his own shadow (Don't ask!), General "Thunderbolt" Ross in a mech-suit, Russian sleeper The Devastator, Russian child/monster The Gremlin, The Gremlin's rhyming genetically-engineered Triceratops "Droog" (Marvel comics were fucking WEIRD in the '70's!), The Mole Man and his mole-people, The Shaper of Worlds, Glorian, The Toad-People, a Loch Ness Monster wannabe, Doc Samson, The Locust (One of the, in my opinion, coolest-looking villains in the Marvel Pantheon....see the picture below and tell me that you don't agree.), giant bugs, and The Abomination. 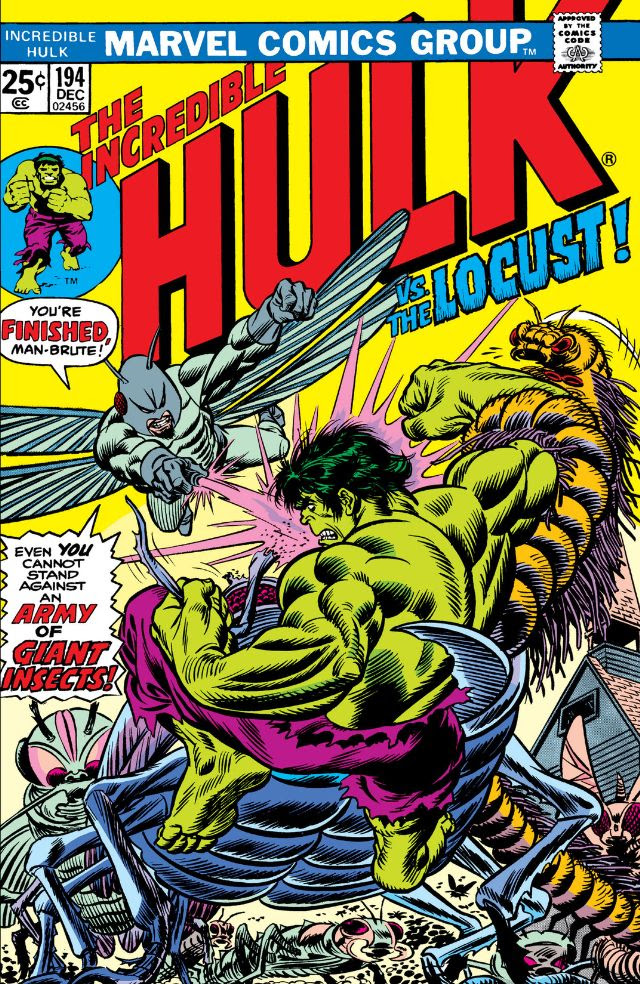 Along the way we get more pathos, as The Hulk befriends a blind Russian girl and a runaway orphan back in The States, and encounters doppelgangers of Crackajack Jackson and Jarella, and more comedy, as The Hulk lusts after his newfound favorite food, beans. Wein expertly manages to evoke sympathy for this gigantic monster by emphasizing his childlike traits, and rarely does an issue go by without something terribly sad happening to the big guy. Although there are running sub-plots, almost each issue is self-contained, and Wein keeps our hero moving constantly, from Oklahoma to New Mexico to Russia to outer space, then Scotland, New York, the midwest, and finally Florida, where he throws down with The Abomination in a classic battle that showcases the artistic wizardry of incoming artist Sal Buscema. As much as I love Herb Trimpe's art (Especially when he was paired with a talented inker, such as Joe Staton or Marie Severin, both of whom contributed to this volume.), Sal Buscema's Hulk is a creature of raw, unbridled power and rage, and his fight scenes virtually burst free from the confines of the page. Exemplary stuff, and the best is yet to come.

The book is rounded out by a nice selection of extras, such as all of the non-reprint material from MARVEL TREASURY EDITION #5, a house ad for that book, the cover of GIANT-SIZE HULK #1, Ed Hannigan & Frank Giacoia's unaltered art from the cover of THE INCREDIBLE HULK #192 (They replaced Hannigan's Hulk face with what appears to be a John Romita face.), Herb Trimpe's unused covers for issues 192 and 193, some original Trimpe/Staton art pages, Sal Buscema's Marvel penciling tryout page, and creator bios.

Overall, a great way to pass a few hours...I enjoyed this volume more than I did the previous one.

Posted by The Crabby Reviewer at 3:10 PM