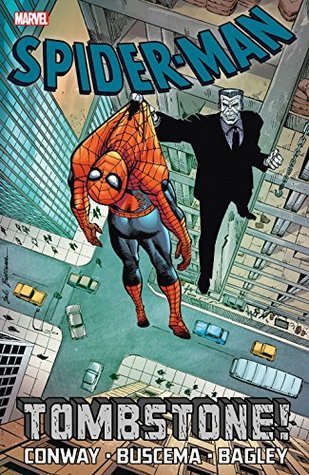 Return with me now, to those thrilling days of yesteryear....when comics had subplots and supporting casts, and weren't written for the trade.

Not written for the trade...and yet, they hold up remarkably well when collected in big, fat, chunky books like SPIDER-MAN: TOMBSTONE, VOL. 1.

This volume highlights the work of writer Gerry Conway and artist Sal Buscema, and what a team they were. While continuity between the three Spider-Man books was extremely tight at the time these issues were published (1988-1989), the stories are never hard to follow, thanks to Conway recapping events from the other titles when necessary. The main underlying plot of the book is Tombstone, and his connection to longtime supporting cast member Joe Robertson, but that storyline weaves in and out of the issues before ending on a startling cliffhanger on the collection's final page. (This book was published just about two years ago, and no second volume has been solicited, which is a shame....this storyline, hell, the title as a whole, really deserves further collected editions.)

In addition to the compelling Tombstone/Robertson story arc, Conway also gives generous amounts of screen-time to other Spidey supporting cast members, including Aunt May, Mary Jane, Kristy Watson, Flash Thompson, Betty Brant-Leeds, Joy Mercado, Glory Grant, J. Jonah Jameson, Nick Katzenberg, The Robertson Family, Harry, Liz, and Normie Osborn, and Ben Urich. Rich subplots and interesting supporting characters went a long way in sustaining reader interest back in the day, and I feel that the loss of those things, the result of writing for the trade, is a big reason for the dismal sales of new comics these days. They don't give you a great incentive to come back month after month when you can drop in and out of the title and never miss much, aside from the latest six-issue earth-shattering story arc or latest senseless crossover.

This volume is a feast for Spider-man fans, and includes clashes with The Tarantula, Captain America (John Walker), The Kingpin, The Lobo Brothers, Boomerang, The Punisher, The Arranger, The Persuader,  The High Evolutionary, The Young Gods, Gwen Stacy's "clone", Carrion, The Green Goblin, The Hobgoblin, and various demons and other entities during the INFERNO crossover event.

Buscema's art is better than ever in this volume, as he mainly inks his own work, and the main story from the Annual features early Mark Bagley art. As far as extras go, there's a small selection of Buscema original art, some OFFICIAL HANDBOOK OF THE MARVEL UNIVERSE profile art, and a Mike Machlan/John Romita, Sr. MARVEL FANFARE pinup.

I had a blast reading this collection, and I'm really hoping that Marvel will, at some point, deliver a second volume.

Posted by The Crabby Reviewer at 10:13 AM