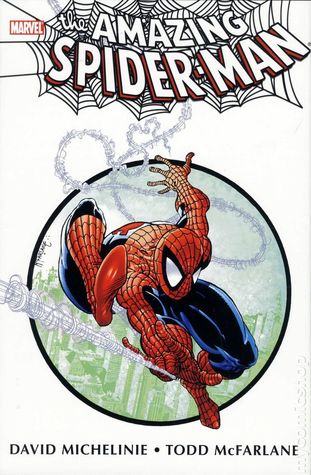 One of the best-loved eras of Spider-Man, all in one volume.

Turns out that, while the art still holds up, the writing doesn't.

Kudos, again, to Marvel's collected editions team for not just sticking to the mission statement of the title and including ONLY the issues that Michelinie and McFarlane worked on as a team. DC is known for doing such maddeningly curated collections, and it makes for very difficult going for anyone who is interested in reading a complete story. Collection Editor Mark D. Beazley includes issues that weren't illustrated by McFarlane, and features helpful recap pages when something happened in one of the other Spidey titles that you need to know about. Marvel just KILLS DC as far as collected editions go....

The book starts out with a really bland couple of issues, as Spidey tackles a spider-phobic Doctor Octopus, before kicking things into high gear with Todd McFarlane's debut issue, THE AMAZING SPIDER-MAN #298. This otherwise unmemorable tale finds Spidey facing off against Chance, but it leads to bigger and better things with the introduction of Venom in #300. From there, Michelinie & McFarlane fill the book with Silver Sable, The Sandman, The Life Foundation, The Black Fox, Jonathon Caesar, The Prowler, Humbug, The Chameleon, The Taskmaster, Styx and Stone, Killer Shrike, The Tinkerer, Mysterio, The Green Goblin, The Hobgoblin, The Lizard, the threat of the INFERNO crossover, The Thing, The Scorpion, The Rhino, Justin Hammer, Blacklash, Paladin, Solo, Ultimatum, Captain America, Sabretooth, The Red Skull, Graviton, Loki, Hydro-Man, The Kingpin, The Wizard, Doctor Doom, The Mandarin, Magneto, Sebastian Shaw, The Hulk, The Tri-Sentinel, Captain Universe...whew. Michelinie gives ample attention to Spidey's alter-ego, Peter Parker, and his large supporting cast, and subplots abound.....but that contributes to the biggest flaw in this particular run of Spider-man: At times, it almost feels like Michelinie is running through a wish-list of things that McFarlane wants to draw before his inevitable departure from the book. Issue #315 cover-features Spidey tangling with Hydro-Man, but that battle lasts a mere three pages, with the bulk of the issue devoted to Venom escaping from The Vault and Nathan Lubensky getting in over his head thanks to his gambling debts. Don't get me wrong....this is all interesting stuff, but the villains do get short-shrifted for a good portion of this collection. The collection as a whole seems very underwritten, as if Michelinie is coasting along on McFarlane's revolutionary visuals. (The hideously bloated and senseless ASSASSIN NATION PLOT being a prime example of this.)

Todd McFarlane has become something of a punchline over the past few decades, but if you were around when these issues were originally published, you'll remember what a sensation his art caused. Not since Steve Ditko had we seen such a bendy, big-eyed Spider-Man. His webbing was wild and uncontrolled, he crawled, swung, and hung all over every panel....Our hero was never static. While McFarlane's humans looked like cartoons come to life, his heroes and villains were larger than life and twice as dynamic. His art holds up surprisingly well.

The book is rounded out by a nice selection of extras, including a "Bat-Man" story by McFarlane and Peter David, from WHAT THE?! #3, a Prowler story from THE SPECTACULAR SPIDER-MAN ANNUAL #10, McFarlane's covers from MARVEL TALES, a David Michelinie essay, Spider-man poster art, the covers to AMAZING HEROES #170, THE AMAZING SPIDER-MAN: SKATING ON THIN ICE, and MARVEL 1989: THE YEAR IN REVIEW, a McFarlane/Erik Larsen pinup, McFarlane's covers to a handful of trade paperbacks, and some images from Marvel's HANDBOOK series.

Overall, this is a fun collection. The stories may have left a little to be desired, but the art is top-notch, and it was a blast to revisit the characters as they went through such major changes. (This is, after all, where Mary Jane became a top model and got into acting, which changed the fortunes of Peter Parker in a big way.) This collection is long out-of-print, but Marvel is reprinting it later this year.


Posted by The Crabby Reviewer at 5:28 PM