This is the kind of thing that happens when you have a room full of unread comics from the better part of the past two decades:You buy a new book, find that it dovetails in perfectly with an unread book that you bought ten years ago, and they fit perfectly with still another book that came out last year, and, hey, they'll all fit with a book that's coming out in three months!!! Soon, you have these giant, long runs of trade paperbacks and hardcovers and omnibuses sitting piled together in the stacks, and...here you go. Yet another marathon.

This one actually started earlier in the week, when I reviewed IRON MAN 2020, which shares an issue with this collection. (See how this all fits together, like some odd conspiracy theory...?) THE AMAZING SPIDER-MAN EPIC COLLECTION, VOLUME 17: KRAVEN'S LAST HUNT opens with that issue, THE AMAZING SPIDER-MAN ANNUAL #20, which is an odd, yet strangely effective, issues featuring Arno Stark, the Iron Man of 2020. See the above review for a more complete overview of this story.

From there, we get into a storyline that I was happy to get away from way back in 1986, when I dropped out of reading/collecting comics: The endless "Gang War" story arc that consumed THE AMAZING SPIDER-MAN for what seemed like years.

The gang warfare scenario plays out in this collection, starting with SPIDER-MAN VERSUS WOLVERINE, a really weird one-shot that finds Spidey traveling to Germany with reporter Ned Leeds, and teaming up with Wolverine in an attempt to save a spy from KGB agents. Writer James Owsley casually slaughters Ned Leeds in this one-shot, starting one of the biggest clusterfucks in Spider-Man history.

From there we hop over to THE AMAZING SPIDER-MAN #289, which reveals that Ned Leeds was The Hobgoblin! But...Ned just died offscreen, and that issue had no mention of The Hobgoblin, right...? Shut up!!! We'll make this work, somehow....Cut to WEB OF SPIDER-MAN #'s 29-30, where Owsley, to his credit, works overtime to make you believe that, yes, Ned Leeds WAS The Hobgoblin all this time. Mercifully, these two WEB issues put to bed, once and for all, the interminable mob storyline that had been slowly choking the life out of the Spider-man books for the prior year or two....Goodbye, Hobgoblin, Kingpin, Foreigner, The Rose. Don't let the door hit you on the way out.

With that out of the way, we get to the next oddball scenario: Stan Lee decided that he wanted to Marry Peter Parker and Mary Jane Watson in the Spider-Man newspaper strip, and Marvel Editor-in-Chief Jim Shooter decided that would be a good idea for the comics, too. So: Spider-Man, who we just saw coming home to a scantily-clad Black Cat, was forced to woo, propose to, and Marry longtime friend and supporting cast member Mary Jane. Peter proposes, but before Mary Jane can accept, we have yet another intolerably boring fight against one of these Smythe twats and their sleep-inducing Spider-Slayers. Having never read a Spider-Slayer story that hasn't bored me to tears, I cannot fathom just what it is that makes these fucking stupid robots so fascinating to Spider-Man writers. After this nonsense, we jump right to.... 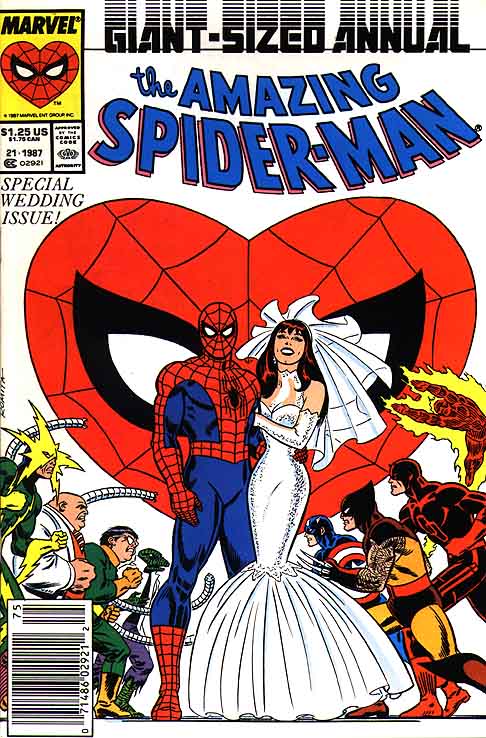 ...THE WEDDING!!!! Never has such an important story felt so rushed and shoddy. Never have we seen a more compelling reason to believe that a marriage is doomed to fail.....

The plot is credited to Jim Shooter, with David Micheliie contributing the script. The art is by Paul Ryan, who I was a big fan of, but his solid, workmanlike art does not scream big, flashy event. Couple that with the ever-lazy inking of Vince Colletta, and you have a book that, for all appearances, screams fill-in. And what better way to show how much two engaged people love one another and are looking forward to building a future together...? Peter Parker runs away and moons over his dead girlfriend, Gwen Stacey. How could he ever love another...? Let me just spend the rest of my life pining away for a corpse! And Mary Jane.....I probably wouldn't have been too thrilled with my wife if, the NIGHT BEFORE OUR WEDDING, she was driving around town with a mystery millionaire, ALONE, doing God-knows-what. Then, she shows up at her wedding, IN THAT MAN'S CAR!!!! How many brides arrive at their wedding in a car driven by a boyfriend? A boyfriend that she had just SPENT THE NIGHT WITH???? Truly some odd authorial choices being made here. But it's all good. They get married, and then..... Don't you hate it when your new spouse vanishes for two weeks because a crazy Russian big-game hunter buried them alive....?

The saving grace of this volume is the sublime "Fearful Symmetry: Kraven's Last Hunt", by the team of J.M. DeMatteis, Mike Zeck, and Bob McLeod. This six-part epic remains one of the most powerful Spider-man stories ever told, as Spidey's old nemesis, Kraven the Hunter, decides that the only way to truly overcome Spider-Man is to take him off the board, replace him, and outdo him by defeating a foe that Spider-Man himself could not. The psychological underpinnings of this tale run deep, and this was a truly monumental showcase for Kraven's unique brand of villainy. This volume is worth buying for this six-part story alone.

Collection Editor Mark D. Beazley has once again outdone himself, leaving no stone unturned for extras, including covers from other collected editions, MARVEL AGE covers and articles about the wedding, a Fred Hembeck wedding spoof strip, designer Willi Smith's sketches of Mary Jane's wedding dress, a Mary Jane cut-out fashion doll, complete with different cut-out outfits, the script for Spider-Man's real-life bachelor party and wedding (Which was held in Shea Stadium, and officiated by Stan Lee!), photos from the wedding, all of the newspaper strips that led up to, depicted, and followed the wedding, wedding poster art and related MARVEL SAGA covers, related ads, original Mike Zeck/Bob McLeod art, introductions to previous collected editions by Stan Lee and J.M. DeMatteis, as well as the covers to those editions, and a page of art created just for those collections. If you go nuts for behind-the-scenes stuff, there's a lot here to love.


THE AMAZING SPIDER-MAN EPIC COLLECTION, VOLUME 17: KRAVEN'S LAST HUNT ends on a high note, promising great things to come for the wall-crawler over the next few years of his publishing career, and earns a hefty nine out of ten Vermins:🐀🐀🐀🐀🐀🐀🐀🐀🐀

Posted by The Crabby Reviewer at 10:03 PM