To Infinity...AND BEYOND!!!, Part Twenty-Two: Guardians of The Galaxy: Road to Annihilation, Vol. 1 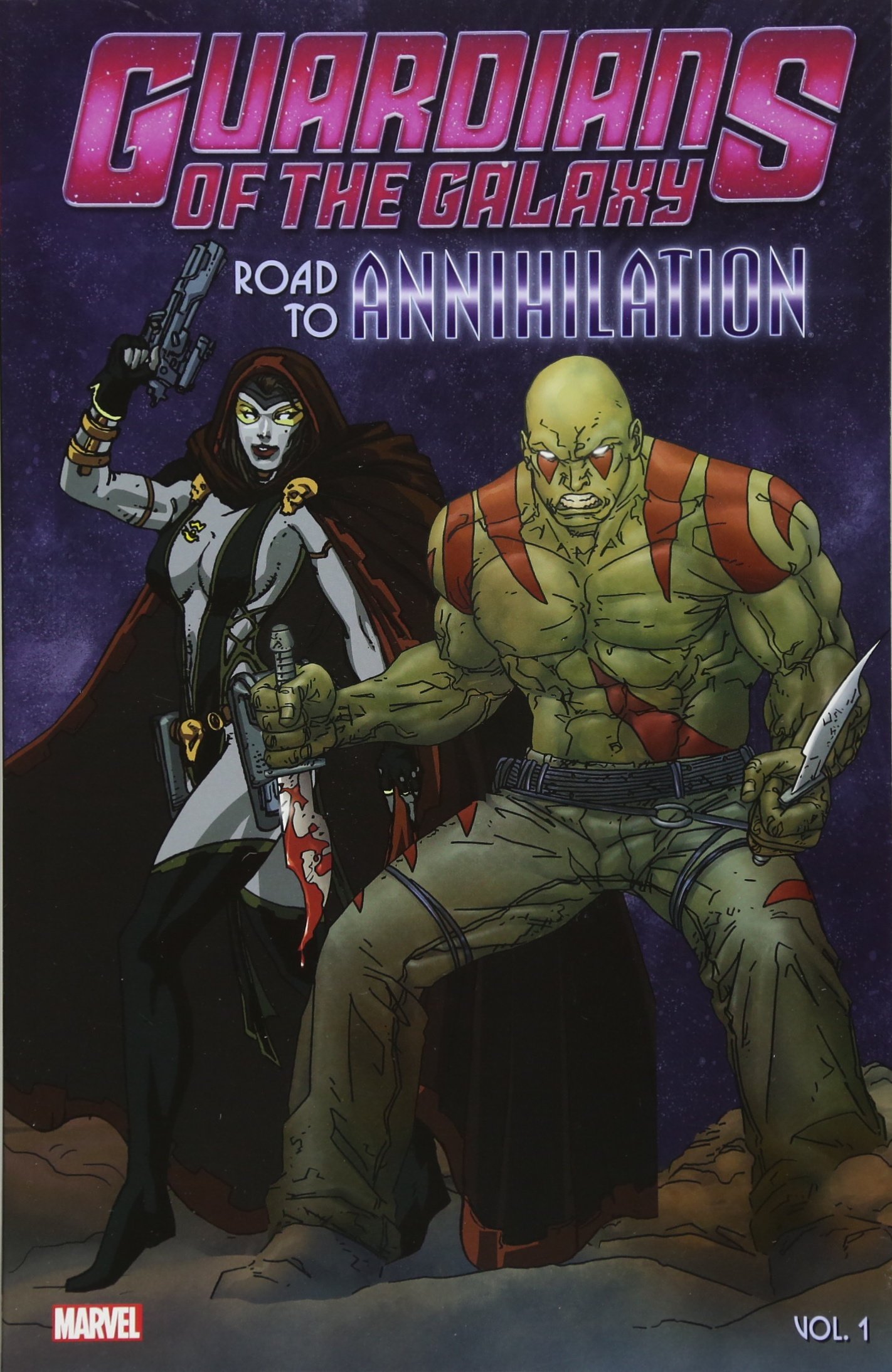 Drax and Gamora take center stage in this pre-ANNIHILATION collection.

"I'm getting sick of these Infinity Gauntlet books I've been binge-reading!", he said, as he looked at the life-size Infinity Gauntlet perched on the top shelf of his desk. Yes, all good things must eventually end, and that goes for my INFINITY reviews. This is the next-to-last. For now, at least. I can think of at least six other INFINITY-branded books sitting in my to-be-read pile(s).

I initially passed on this massive collection, but when Amazon had a digital copy available for four bucks (Over forty dollars cheaper than a hard copy!!!), well...even the most hard-hearted reader can't help but open up their wallet for a bargain like that.

And, as it turns out, four bucks was too much to pay.

This volume theoretically shines the spotlight on Adam Warlock's sidekicks, Drax and Gamora, and it is quite a mixed bag.

A large part of this collection is taken up by the six-issue Jim Starlin mini-series THANOS: INFINITY ABYSS, which I already had a digital copy of, and is really the best thing in the book. (Click HERE to read that review.) The rest of the book...meh.

The collection starts off with the misguided WARLOCK 4-issue mini-series, written and illustrated by Tom Lyle, who is primarily known as an artist, and for good reason. This nearly unreadable, pointless mess reunites most of The Infinity Watch to face off against a generic bad-guy from The Negative Zone. Along the way, the corpse of Captain Marvel gets desecrated, and Jim Starlin's legacy on that character gets shit on. Next!

From there, we get issues 4-6 and 15-16 of Peter David's CAPTAIN MARVEL series, which feature Drax and The Micronauts (Or, "The Microns", don't sue us!) I used to LOVE Peter David's work when I was younger, but now I mainly cringe and get angry when I reread his older work, because it all basically exists as a vehicle for his poor attempts at humor, bad puns, and Hollywood in-jokes. Almost everyone in these issues came across as a self-centered, unlikeable asshole. Next!!

The book closes out with SHE-HULK #'s 7-8, which tell a fun cosmic tale which pits She-Hulk against The Champion of The Universe, and features Drax, Gamora, Pip, Beta-Ray Bill, The Silver Surfer, and Gladiator. Humorous, well-written stuff, with appealing art by Juan Bobillo.

Overall, a completely skippable collection.....buy the THANOS collection instead, and track down the Dan Slott SHE-HULK trade for good measure.

GUARDIANS OF THE GALAXY: ROAD TO ANNIHILATION, VOL. 1 earns a down-to-earth four out of ten desecrated Captain Marvel corpses:
💀💀💀💀

Posted by The Crabby Reviewer at 1:24 PM