To Infinity...AND BEYOND!!!, Part Twenty-Three: Marvel: The End 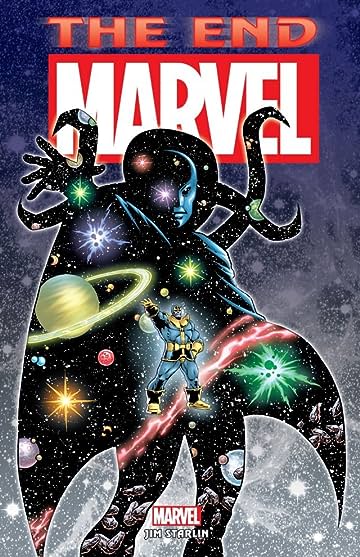 What better place to end this current round of INFINITY books than with...MARVEL: THE END....?

Back around the turn of the millennium, Marvel was doing a lot of THE END-branded books. They were usually a mini-series, sometimes a one-shot, that depicted the final adventure of a popular character or team of characters. I read an interview with Jim Starlin, writer/artist of MARVEL: THE END where he said that he must not have fully understood the mandate of the title, since his story didn't really feature "the end" of The Marvel Universe. I have to disagree, as this book has, in my opinion, one of the most poignant, well-deserved endings of any comic book that I have ever read, and this adventure can be looked at as either an ending, or a new beginning. But the road to that ending is a rocky one....

As the cover art implies, Thanos is the star of this collection, but he is not the one responsible for the impending end of the universe. That distinction falls upon a new character, Akhenaten, an ancient Egyptian Pharaoh, who is abducted by aliens in his time, and returned to Earth in the present day, having been gifted with limitless powers by his anal-probing friends. I'm generally not a big fan of new characters being involved in big arcs like this, because it doesn't really give them enough time to grow and breathe enough for readers to care about them. Akhenaten is no exception. He's a cookie-cutter, scenery-chewing mustache-twirler, but, as the story unfolds, you come to realize what type of story Jim Starlin is telling, which is an epic about the struggle between the powerful and the powerless, and a powerful coda to the story of his most famous creation, Thanos. Akhenaten is just a means to an end.

After the returning Akhenaten annihilates The Avengers, The X-Men, and The Fantastic Four, as well as dispatching the military might of the entire planet, Starlin follows a small group of survivors, among them Doctor Doom, Thanos, and the original Defenders, as they struggle to find a way to defeat the almost Godlike threat of the mad Pharaoh.

This book functions as a follow-up to THANOS: INFINITY ABYSS, and it picks up right where that collection left off, with Adam Warlock and Gamora training our reality's new supervisor. Starlin's art has never looked better (He is paired here with longtime collaborator, inker Al Milgrom), and his story is both epic and cosmic, in every sense of those words. The story takes a while to kick into high gear, but the ending, a conversation between longtime frenemies Adam Warlock and Thanos, is worth the price of admission alone. This is truly a jaw-dropper of an finale, and cements Thanos as one of the all-time great comic book characters. Amazing stuff, and highly recommended.

Posted by The Crabby Reviewer at 3:12 PM