To Infinity...AND BEYOND!!!, Part Twenty: The Infinity Watch, Volume 2 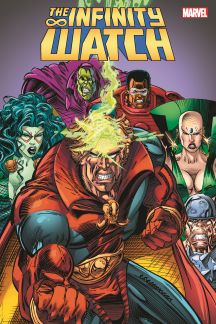 The watch winds down.

THE INFINITY WATCH, VOLUME 2 immediately lost points with me by abandoning the idea of this being a complete two-volume reprint of WARLOCK AND THE INFINITY WATCH. The first volume left off with issue #23, and this one starts off with #26. The 23rd, 24th, and 25th issues were part of a crossover; The helpful Marvel Collected Editions team have included recap pages to let you know what you missed in those issues (Which is, in all honesty, not much, aside from the reveal of who the sixth member of the team is, which is a pretty important moment....), but the suggestion to check out the THOR: BLOOD AND THUNDER collection for the complete story is kind of hollow, considering that it has been out-of-print for years now. (As I said, there's not much being missed by skipping those issues, but....it set off my collector's OCD, and forced me to dig out my copy of the THOR paperback and reread it, which was just as painful the second time around.)

Series creator Jim Starlin exits the series with issue #31, so this collection loses its driving force after a mere seven issues. Starlin left in mid-story, which makes me wonder what precipitated his hasty vanishing act....If anybody has a clue, please chime in below in the comments, because I'm dying to know.

The series loses a little something when Starlin leaves, but he was clearly running out of steam anyway by that point. He has the team fight a brainwashed Avengers contingent, which leads into the mandatory Man-Beast appearance, then starts off their confrontation with Count Abyss, before leaving a cliffhanger that is resolved by writers Richard Ashford and John Arcudi, who both do a good job with the team. The writing remains fairly consistent throughout the collection, and the same can be said for the art, which remains consistently dreadful. The hideous Tom Grindberg art makes way for the bland, vanilla art of Pat Oliffe, and never gets any better until Mike Gustovich takes over just in time for the series to be canceled. With the departure of the series creator, and the eyesore art, there was probably nothing that could have kept this series from being canceled.

John Arcudi does a decent job of wrapping up Starlin's dangling plot threads, but the series still ends very abruptly, and the final two issues suffer from being part of a crossover., a malady that has afflicted this book since the very beginning.

Overall, a worthwhile read, if only for the offbeat interpersonal relationships of the members of The Watch. With better art, this book could have been one for the ages; As it stands, it is an interesting footnote to Jim Starlin's INFINITY trilogy.

THE INFINITY WATCH, VOLUME 2 collects WARLOCK CHRONICLES #6 and WARLOCK AND THE INFINITY WATCH #'s 26-42, with a few pages of thumbnail-sized original art, a Starlin piece from MARVEL UNIVERSE: MILLENNIAL VISIONS, a Fred Hembeck page from MARVEL AGE #132, and some letter column and trading card art.


Posted by The Crabby Reviewer at 1:27 PM