I just finished DARK NIGHTS: METAL: THE DELUXE EDITION, and I have almost no words with which to describe the plot to you. Did I understand it...? Eh, vaguely. The story itself is all bluff and bluster, but, like a good summer blockbuster, the fan service and spectacle of the whole thing was enough to win me over.

Once again, writer Scott Snyder characterizes Batman as a kind of rich, dangerous Dennis The Menace: His curiosity, and his unwillingness to listen to anyone, even his closest friends/allies, ends up endangering the entire multiverse and everyone in it.

The story, such as it is, is basically the literary equivalent of one of those "Magic Eye" pictures...it's a complete, senseless jumble that coheres briefly if looked at from jussssst the right angle; But look at it directly, and it falls apart.

Batman has supposedly been tracking down clues to some ancient mystery involving Nth Metal, which leads him on a series of incomprehensible quests that end with him opening the doorway to a dark dimension, which is filled with vaguely sketched evil Batmen, and lorded over by Barbatos, who wants to drag The Earth down into his dark dimension. Why? Why not? (Stories like this bother me, because there really is no threat to anyone. If Batman had just minded his own business, none of this bad shit would have happened. Which makes Batman, essentially, the villain of the piece.)

As I said earlier, I have almost no clue what the Nth Metal had to do with anything, who most of these evil Batmen were supposed to be, why the evil Robins walk around saying "Crow, crow!", how The Challengers of the Unknown fit in, what The Metal Men had to do with anything, why Plastic Man is stuck in the form of an egg, why Darkseid is a baby, or why and how baby Darkseid can be so cute. All I know is this: There were enough fun things going on that I was able to set my brain aside and just enjoy it. As the great Tommy Maitland might say, "We are just here for funsies!" 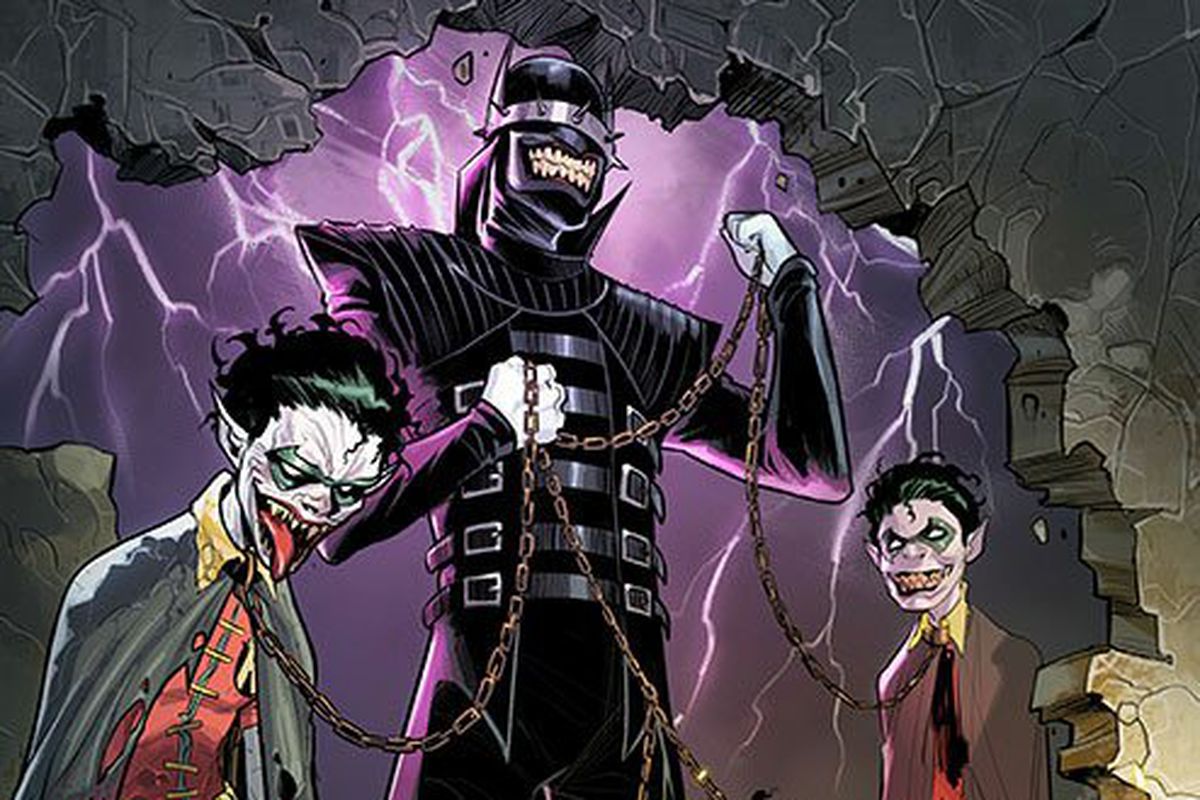 Batman and Superman going all Frodo and Sam in their own Mount Doom.
The callbacks to CRISIS ON INFINITE EARTHS, the well that DC just can't stop going back to.
The unshakable strength and determination of Wonder Woman.
The huge, widescreen action scenes.
Ra's Al Ghul, Vandal Savage, Shazam, Black Adam, Starro, Swamp Thing with a bow tie, the tomb of Arion...I could go on and on. This collection is like a travelogue of DC history, faces, and places. Longtime readers will have a ball. Jeez, The Sandman appears, and plays a pivotal role. And Snyder makes Hal Jordan funny, and gives him a personality. Amazing.

The bad...? I have just given up on following DC continuity. Is this supposed to be the first appearance of Hawkman? How about Plastic Man? I know Hawkman had a "New 52" book, but has that been retconned out of existence with "Rebirth"...? Why is Plastic Man an egg...? (They actually explain this, but it made no sense to me at all.) I had no clue, still have no clue, and decided that I don't, and shouldn't, care. I read this collection, had fun with it, and that should be enough. This book is batshit crazy fun. End of story.

DC Comics provided a review copy that ran 184 pages, and Amazon is listing the hardcover as having 215 pages, so...there should be stuff in here that DC didn't let me see. Thanks, DC! I assume it is some combination of variant covers and original art.

Posted by The Crabby Reviewer at 4:53 PM