Here There Be Monsters, Part Three: The Invincible Iron Man #101 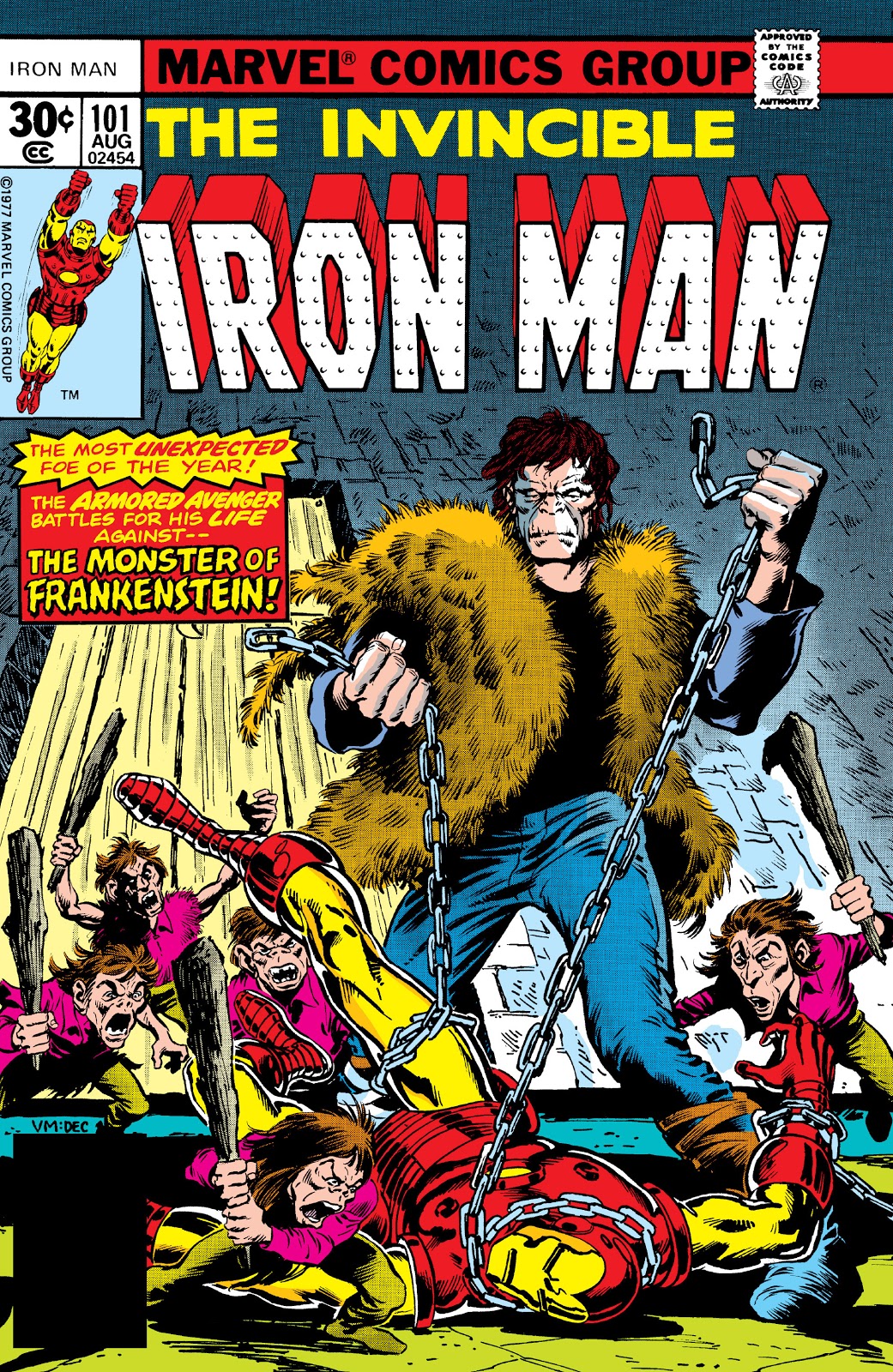 I was forced to seek out two back issues of THE INVINCIBLE IRON MAN to get some closure after the abrupt cancellation of THE FRANKENSTEIN MONSTER with issue #18 of that late, lamented title. Marvel's collected edition team is usually spot-on with their trade paperbacks, but THE MONSTER OF FRANKENSTEIN oddly omitted these two issues, and the lack of resolution was driving me nuts.

Luckily, Marvel had a great tradition in the '70's of wrapping up cancelled books storylines in other titles, so Frankenstein's creature does get to have his cliffhanger wrapped up. The bad news is,the first part of the two-part storyline is a complete dud.

This issue runs a mere 17 pages, but writer Bill Mantlo crams a lot in: Iron Man, fresh off of an anniversary-issue throwdown with arch-enemy The Mandarin, steals a jet from the Chinese military, is shot down somewhere in the vicinity of Castle Frankenstein, and is promptly captured by the misshapen dwarves that we met in the last issue of Frankie's title. Shockingly, The Creature, who was a prisoner of these dwarves when we last saw him, is working with them now, and they all make short work of Iron Man. They convince him that they need his help to fight "The Other", who has captured their mistress, Victoria Von Frankenstein. The reveal of just who "The Other" is is quite underwhelming. Annnnd.....cliffhanger!

Bill Mantlo is in full journeyman mode here. He was always a hit-or-miss writer...you could tell when he gave a shit, and when he was just cranking out words to make a deadline and a buck. This seems like one of the latter cases. Mantlo took over THE FRANKENSTEIN MONSTER with the final issue of that title, and he threw the book off into a whole new direction, and never got to finish the story. I can't imagine that this is where he intended to go, but......at least he was given an opportunity to wrap up the dangling plotline. Hopefully the conclusion will be better, but I'm not holding my breath. The art, by George Tuska, is an eyesore. I was never a fan, even as a kid. I remember buying THE INVINCIBLE IRON MAN #100 off of the newsstand, and being very disappointed by his interior art. The Jim Starlin cover baited, and the interior art switched! And a valuable lesson was learned.....

The cover here is provided by former Frankenstein artist Val Mayerik, and is undoubtedly the best thing about this dud of an issue.

THE INVINCIBLE IRON MAN #101 earns a shameful two out of ten Castles of Frankenstein:
🏰🏰


Posted by The Crabby Reviewer at 2:24 PM