Here There Be Monsters, Part One: The Legion of Monsters, #1 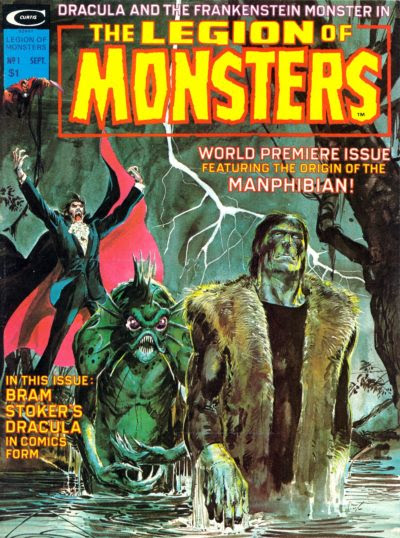 I'm in the middle of a short Monster-comic binge-read, dipping in and out of THE MONSTER OF FRANKENSTEIN and WEREWOLF BY NIGHT OMNIBUS, and I decided to pick up this Marvel Monster magazine on Comixology. (The other two books will be reviewed in due course, but this one pushed enough buttons that I decided to tackle it first.)

First, the good: Beneath this classic Neal Adams cover, you get 42 pages of mostly enjoyable stuff.

The book starts off with a gorgeous Frankenstein's Monster pin-up by Pablo Marcos, and is followed by a Doug Moench-penned tale of Frankenstein's Monster, which is gorgeously illustrated by the vastly underrated Val Mayerik. Continuing the creature's wanderings from his black-and-white MONSTERS UNLEASHED stories, this time he finds himself lurching by a mansion that is having a masquerade ball, and, of course, he is invited in by someone who thinks he's just a really tall partygoer with exceptional make-up. In short order, he finds himself framed for the murder of a young woman, and must confront the Police, as well as the real killer. A nice little one-off tale, which is elevated by the beautiful Mayerik artwork.

Next up is the Marv Wolfman/Tony Isabella/Dave Cockrum Manphibian, which is way too convoluted for its own good. (I was especially disappointed to find that The Manphibian is NOT a swamp creature, but a stranded alien.) Nice Cockrum art, but the story was nothing special.

Last, but not least, we get the oddly-placed seventh chapter of Roy Thomas & Dick Giordano's adaptation of Bram Stoker's DRACULA. (It was originally presented in a magazine that was cancelled after the sixth part saw print.) This is a historical curiosity, since it sat unfinished for decades, until someone at Marvel got Thomas and Giordano back together to finish it a decade of so ago. Not a bad story, but Marvel's Dracula just ain't right without Gene Colan artwork.....

That's not a terrible package for the buck or two that I paid on Comixology......BUT...

The bad! This is FAR from the complete issue. I own enough Marvel mags from that era to know that they didn't run 42 pages, including the front cover. Having already purchased the book legally via Comixology, I didn't have any qualms about seeking out scans of the issue online to get the rest of my money's worth. And, WOW...is there a lot missing. And for no good reason, as far as I can tell.

Stuff missing from the digital edition: The contents page, an editorial by Editor Tony Isabella, a great Marvel magazine subscription ad, a page of humorous monster comic strips, a Gerry Conway-scripted story entitled FLIES, an article about then-current and upcoming Horror movies and novels by COMICS BUYER'S GUIDE guiding lights Don and Maggie Thompson, and a bunch of pin-ups, as well as a page previewing the contents of the never-published second issue.

Does Conway own the rights to FLIES...? Why omit the pin-up pages, the editorial, the next-issue page, the subscription ad, the article...? I have no clue. PLUS, two of the DRACULA pages were out of order in the digital book. It was a good read, and it looked great on my tablet, but just be aware that, if you purchase this digital edition, you're not getting the whole magazine.

Posted by The Crabby Reviewer at 3:05 PM