Here There Be Monsters, Part Two: The Monster of Frankenstein 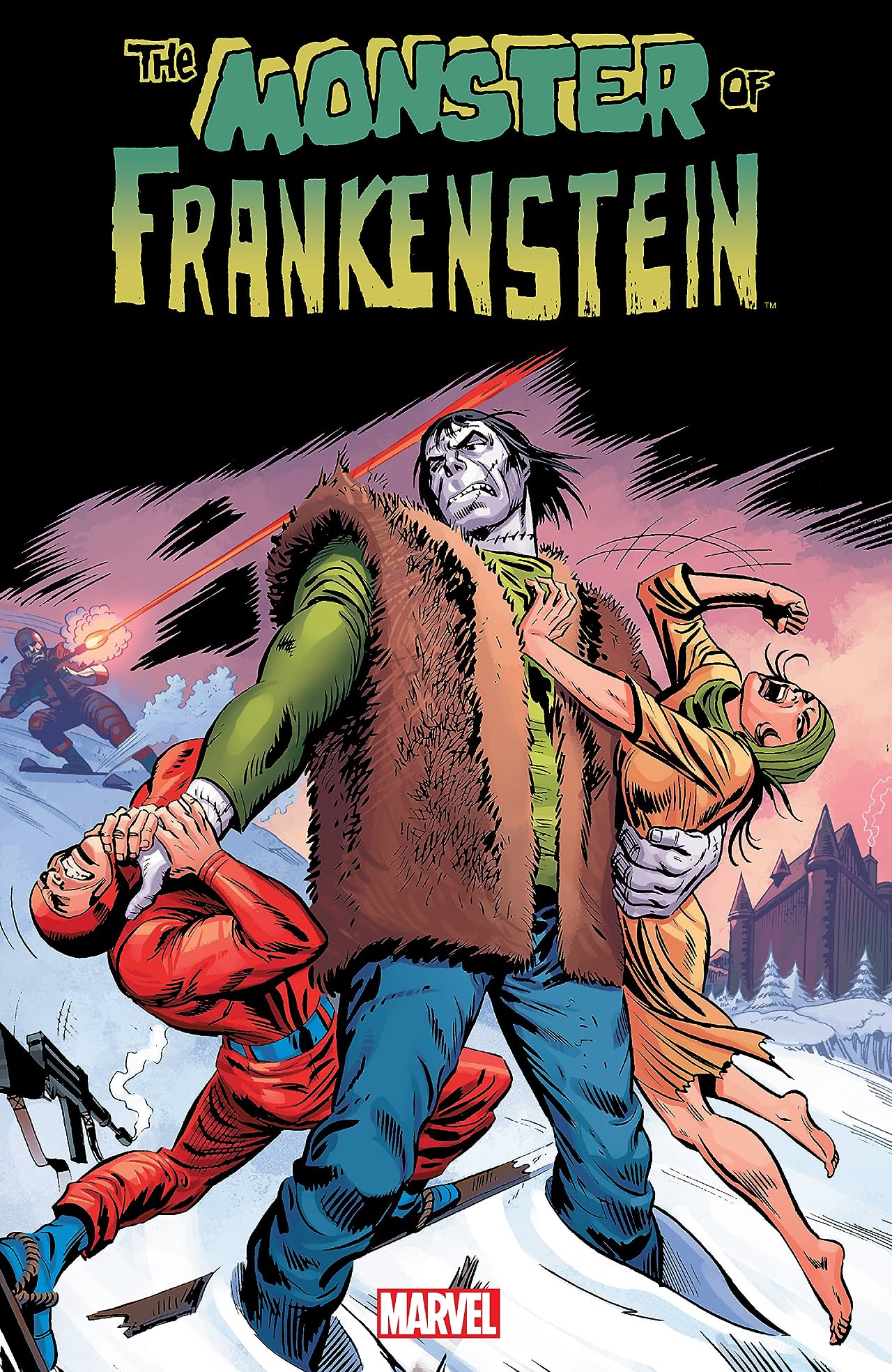 Another childhood favorite from my bucket list gets collected.....Marvel's collected editions department ROCKS!

When I was very young, maybe seven or eight years old, my Aunt Bobbie gave me a five-dollar gift certificate to a comic store near where she lived in Manhattan. As a child living in The Bronx, this was both amazing and terrible. There was a store that sold JUST COMICS...? Amazing! Five dollars was a lot of money when comics were 25 cents a pop. Amazing! Manhattan might as well have been on the moon, though. My mom worked almost every day, and money was tight....I couldn't ask her to spend a day taking me into Manhattan to pick up comics. Terrible! My birthday is in December, and I sat on that gift certificate until the following summer, when Aunt Bobbie called to invite us to come visit her at her apartment.....RIGHT BY THE COMIC STORE! The four decades that have gone by have taken the name of the store from my poor, overloaded brain, but I will never forget what it was like inside.Shelf after shelf filled with new comics, longboxes crammed with back issues, most of which I had never even heard of before, a laughing, friendly staff who shepherded me around and helped me get the most bang for my buck. I ended up getting most of my haul from their dime-box, which was filled with books that were completely new to me, books featuring Morbius, The Living Vampire, Tigra, Red Wolf, The Scarecrow, Dracula, and.....The Monster of Frankenstein. I came home with around fifty books, and I must have read those fifty books hundreds of times each. The Frankenstein books were, by far, my favorite, but...it was an incomplete set. I had issues 10-14, 15, and 17-18, and I freakin' LOVED them, but......I always wanted the rest of the story. And, wonder of wonders...It took a few decades, but Marvel obliged.

I have Marvel's ESSENTIAL MONSTER OF FRANKENSTEIN collection, but I read that ages ago, and have almost no recollection of it. Plus, it was in black-and-white. The contents seem to be exactly the same, but it iss great to have the whole run of the character on nice paper, and in full color.

The first four issues are a retelling of the Mary Shelly novel, distinguished by the outstanding Mike Ploog art. With issue #5, writer Gary Friedrich takes the monster off on new adventures, encountering vikings, a werewoman, the supposed last descendant of his creator, a giant spider, vampires, Dracula, a hunchback, another last descendant...Friedrich's stories are drenched in gothic atmosphere, and the title was truly blessed to have art by a couple of titans of the art form, Mike Ploog and John Buscema. Friedrich exits with issue #11, and the book is taken over by Doug Moench, who promptly has the creature fall off a cliff into icy water, where he is immediately frozen solid, only to find himself thawed out in 1970's New York. (I guess there was really not much else to be done with the creature in his native time period, so.....I'll allow it.)

Val Mayerik joins in as penciller starting with issue #12. Mayerik is an amazing horror artist, but his work here is often marred by sub-par inking. Mayerik never looks better than when he is inking himself, but all of his art in the collection is top-notch. In between issues twelve and thirteen, we get a slew of the creature's adventures from Marvel's black-and-white magazines, and a team-up with Jack Russell....Werewolf by Night! When we return to the main narrative with issue #13, things start to go downhill fast. Moench strays pretty far from the character's horror roots, throwing in mad scientists, cloned creatures, criminal organizations, teen-aged sidekicks......Still entertaining, but not what we came for. Moench departs with issue #17, to be replaced by Bill Mantlo with issue #18, which was the book's final issue. The cancellation must have been very sudden, because Mantlo tries to return the series to a more straightforward horror tone, and ends the issue on a cliffhanger.  The cliffhanger was eventually resolved in the pages of THE INVINCIBLE IRON MAN, but those two issues aren't collected here. (See the next two reviews.......) Spoiler: They sucked.

There's only a handful of extras, but they're pretty good: The final Ploog design for the creature, which has a note from Roy Thomas written on it, some Ploog original cover art, a few virgin Boris Vallejo MONSTERS UNLEASHED covers, and a handful of quarter-page reproductions of various other Frankenstein covers and pinups. This series had some amazing covers, which makes Marvel's use of this bland Ron Wilson image as the collected edition cover especially perplexing. One of these would have worked MUCH better, and probably lured in a few more curious browsers: 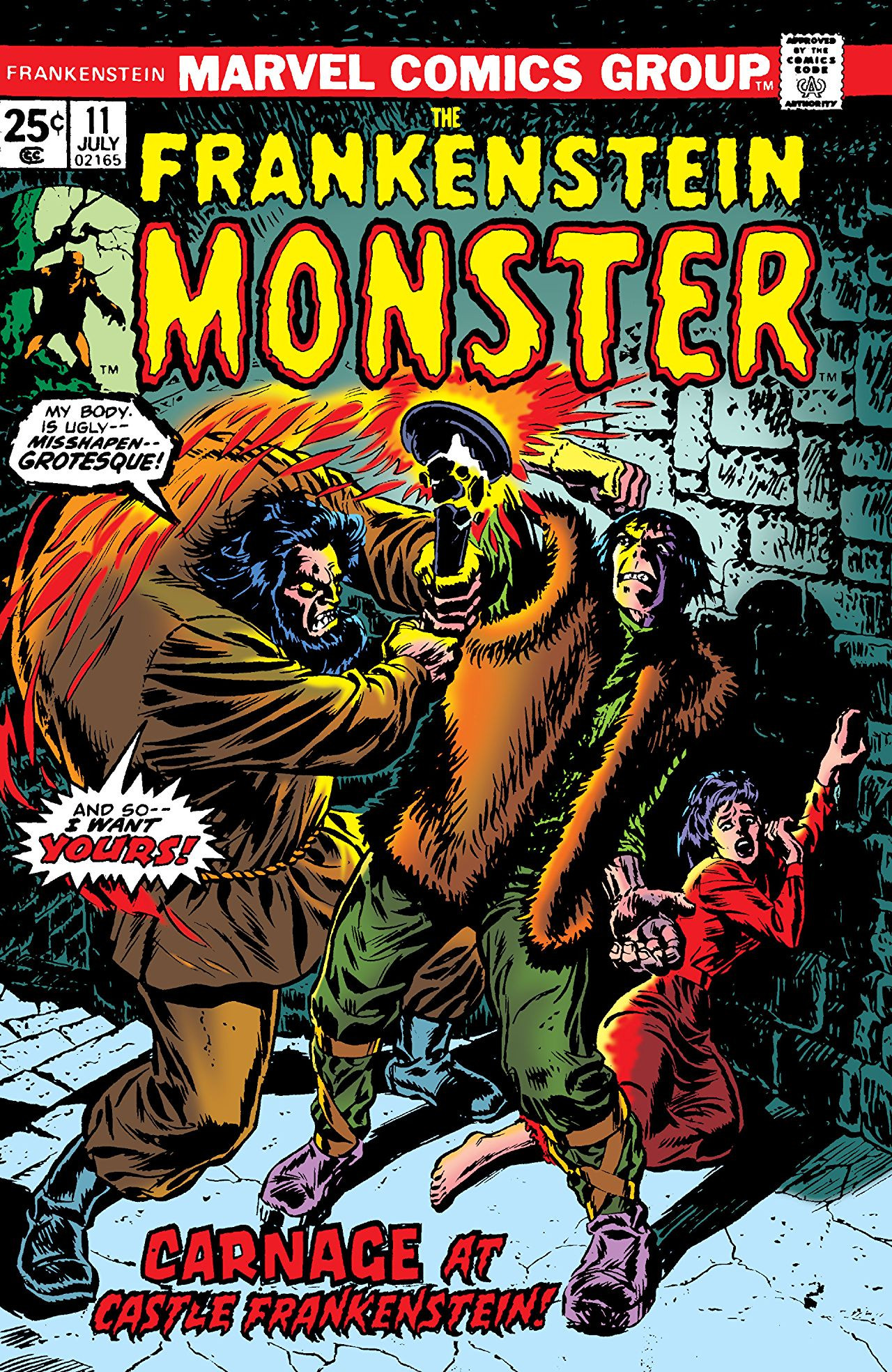 Overall, this is a very satisfying read, especially the first half of the series. Ploog's artwork is staggeringly good, and John Buscema kills it on the Dracula issues. I wish the series could have had the ending that it deserved, but....comics. Most stories have no end, and we fans are conditioned to accept that.

I have to deduct some points due to the puzzling omission of the IRON MAN issues, but THE MONSTER OF FRANKENSTEIN still earns a mighty seven out of ten life-imbuing lightning bolts:🗲🗲🗲🗲🗲🗲🗲

Posted by The Crabby Reviewer at 2:23 PM