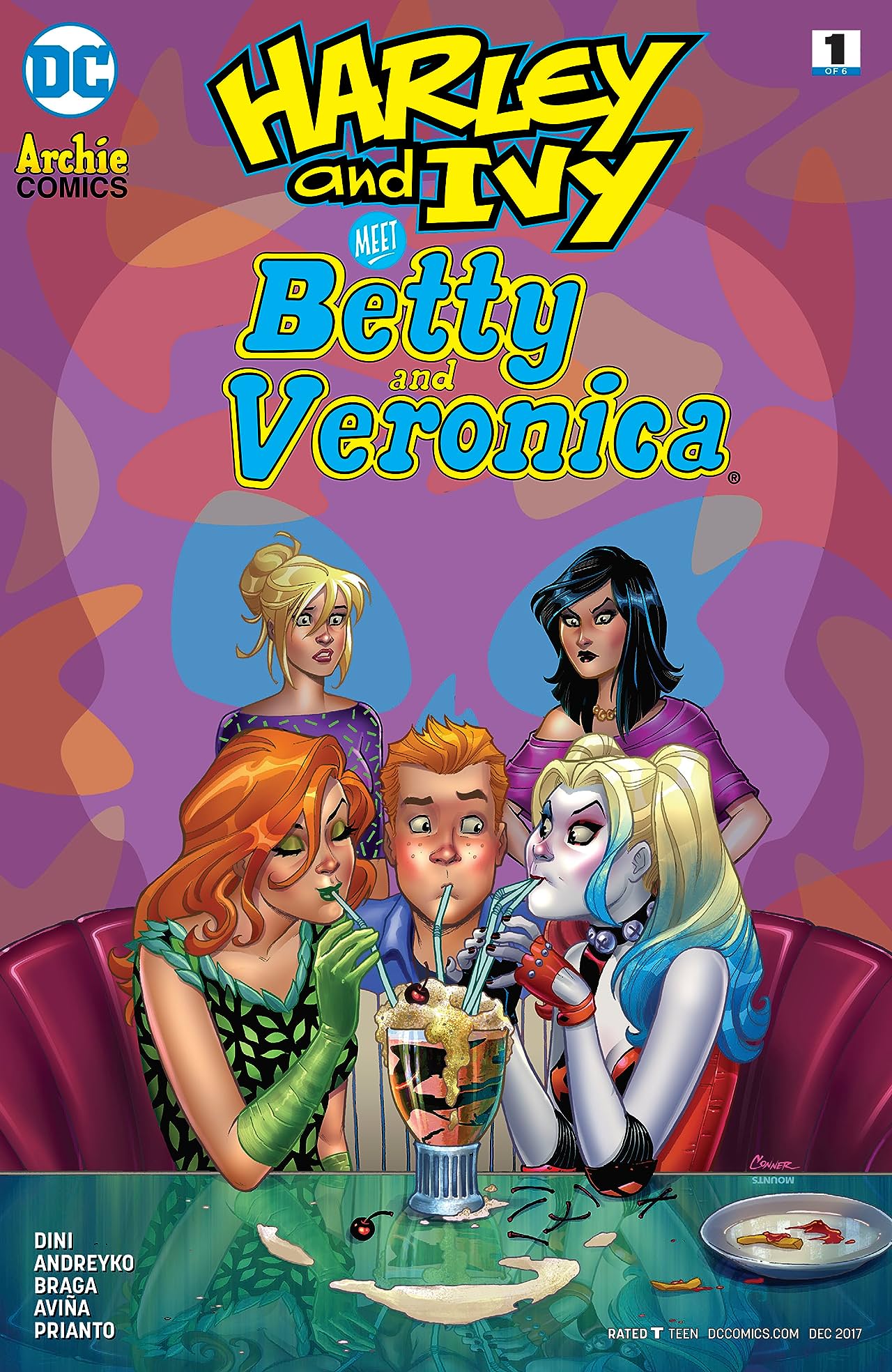 I'm a sucker for a good inter-company crossover. I'm actually just a sucker, period, because I keep getting fished in by crossovers, even though most of them suck. HARLEY AND IVY MEET BETTY AND VERONICA has a great premise, and stars three characters that are red-hot right now. (Sorry, Ivy.) A quick look at the cover would tell you exactly what I think this book would need to be a success, namely Amanda Conner handling the art. There's a lot more wrong here than just the art, but we can start with that.

I slogged through a few trades worth of the dreadful HARLEY QUINN series just for Amanda Conner's art. She creates amazing facial expressions, she can tell a story visually, she can handle comedy AND action, and she draws amazing-looking women. When she bailed on the art, I ditched the series.

On the other hand.......Betty and Veronica, ALL of the Riverdale denizens, for that matter, should have been written and illustrated in the classic Archie comics style. The Betty and Veronica that we get here are the frenemies from RIVERDALE; Rich, bitchy Veronica, and poor, scrappy Betty. If this had been Amanda Conner's Harley and Ivy meeting the classic Archie characters, I believe that this book would have had much greater appeal, and probably would have lived a long life as an evergreen bestseller.

The story, by Paul Dini and Marc Andreyko, is as dull as watching paint dry. Ivy drags Harley to Riverdale to stop Veronica's father from building a college and shopping center over a swamp, and Zatanna and Sabrina accidentally cause Harley and Ivy to bodyswap with Betty and Veronica. Hilarity does not ensue. Dini used to be a must-read, but those days were gone a few decades ago, and Andreyko was great on MANHUNTER, and nothing else.

For a book that stars four attractive women, the art choice of Laura Braga is puzzling. Her figures and faces are all interchangeable, and I often had no idea which of the title characters was which, especially when they're all dressed in Harley and Ivy costumes. Her men are no better- Archie and Kevin look exactly the same. I guess that they had to hire a female artist to avoid pissing off the SJW's, but Braga's art looks like the stuff that a mildly talented kid might doodle in high school: passable, but in no way professional-grade. This stuff would never have passed muster in the bronze age of comics.

HARLEY AND IVY MEET BETTY AND VERONICA could have been something special, but it turns out to be another slapped-together crossover. If DC and Archie had treated it with some care and assigned top-notch creators, it could have been a winner. As it stands, it earns a paltry four out of ten peach-headed thugs:
🍑🍑🍑🍑


Posted by The Crabby Reviewer at 1:44 PM