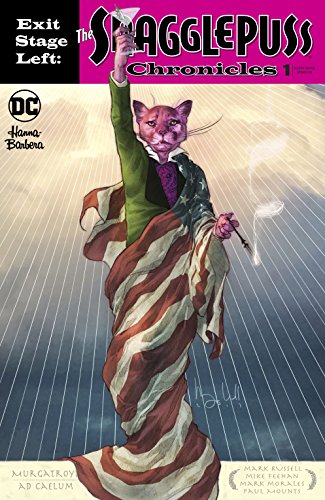 Heavens to Murgatroyd...the best comic that I've read in ages.

Whoever thought up the concept of the DC/Hanna-Barbera adaptations should get a raise, ASAP. I've only read three, so far, but they've all been outstanding. Oddly enough, all three (Two volumes of THE FLINTSTONES and now EXIT STAGE LEFT: THE SNAGGLEPUSS CHRONICLES) have all been written by Mark Russell, who DC needs to lock down to an exclusive contract immediately. This guy is good.

I have never seen a SNAGGLEPUSS cartoon. All I know about him is that he says "Heavens to Murgatroyd!", and "Exit, stage left!". That is the extent of my Snagglepuss knowledge, aside from one cartoon that I watched for five seconds on YouTube so I could get a feel for what his voice sounded like before I started reading this comic. Luckily, no prior knowledge is needed, since Snagglepuss was not a closeted gay southern playwright in the cartoons. Snagglepuss is the toast of Broadway, but his closeted lifestyle is taking a toll on hm, and the shadow of the McCarthy hearings looms large over his life, as he is called back to testify for a second time, where he must make a terrible choice between saving the life and reputation of his lifelong friend or being outed and ostracized himself.

How in the hell someone like Mark Russell can get a gig on a book like this and think "OK, Snagglepuss would make a great soapbox to tell a story about McCarthyism, communism, gay rights, racism, bigotry, the arms race, fathers and sons, and the Hollywood blacklist." A more outlandish vehicle for social commentary you could not find, but Russell makes all of the pieces come together perfectly, leading the characters through a minefield of social and career terrors while steering readers towards the inevitable showdown between Snagglepuss and the Government.

This book is not anything that anyone but Russell could possibly dream up, and that in and of itself is the highest praise I can think of. I could go on and on and tell you how many times I laughed out loud while reading this book, how many times I felt tears welling up in my eyes, how many times I had to stop and ponder some of the issues that the story brings up, but what I really need to convey to you is how important it is that you read this book. In the long run, a SNAGGLEPUSS story is never going to be thought of as being in the same league as MAUS and WATCHMEN, but...it should be. This is a beautiful, emotionally wrenching story about America's past and possible future, and stands as one of the best comics that I've read in years, an achievement that DC Comics should be proud to have published.

EXIT STAGE LEFT: THE SNAGGLEPUSS CHRONICLES earns a whopping nine out of ten Snaggleteeth (Read the story, you'll get it then.):🦁🦁🦁🦁🦁🦁🦁🦁🦁

Posted by The Crabby Reviewer at 1:04 PM