Here There Be Monsters, Part Five: Werewolf By Night Omnibus 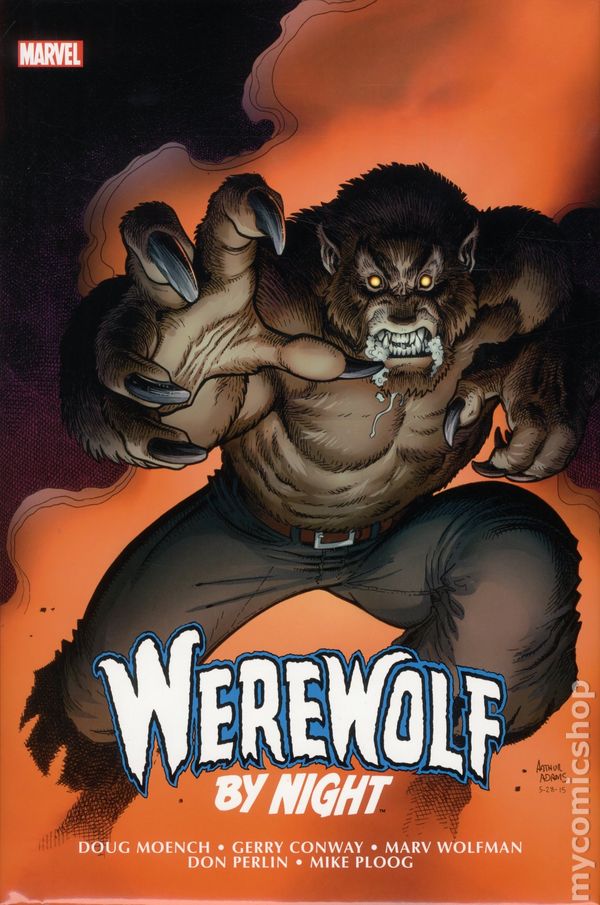 I call books like this "Religious texts", because I am often heard to exclaim while reading them "Jesus Christ, when the fuck is this going to end???", or "God, let this END, already!"

On the surface, the idea of a massive omnibus collection the whole run of WEREWOLF BY NIGHT sounds like a winner, and some (A lot) of this book is very good. The problem is, and this is a problem that comic book readers are very familiar with, nothing ever ends. For every SLEEPER, PLANETARY, or WATCHMEN, there are thousands of comics that started strong, and either slowly petered out, quickly flamed away, or just lingered on and on through creative teams that just didn't give a shit. Being a comic book fan is an exercise in instant gratification and low expectations. Usually, the best you can hope for is a good issue or arc before the writer that you love quits, or the penciller botches a deadline, or the book is cancelled.......and reading something like this omnibus, which collects a staggering fifty-six (!!!!!) issues, just draws attention to every flaw in the series.

WEREWOLF BY NIGHT OMNIBUS collects MARVEL SPOTLIGHT #'s 2-4, WEREWOLF BY NIGHT #'s 1-43, MARVEL TEAM-UP #12, TOMB OF DRACULA #18, GIANT-SIZE CREATURES #1, GIANT-SIZE WEREWOLF #'s 2-5, MARVEL PREMIERE #28, and material from MONSTERS UNLEASHED #'s 6-7. The first year or so of the series is driven by the staggeringly beautiful artwork supplied by Horror icon Mike Ploog. His werewolf is a sight to behold, a lean, sinewy creature of hair, fangs, claws, and bestial, inhuman eyes. Writer Gerry Conway is not at his best here, but he keeps the story moving at a brisk pace. Our hero, Jack Russell, inherits the curse of lycanthropy from his late father, fated to become a werewolf when the moon is full starting on his 18th birthday.

Ploog comes and goes over the course of WBN's first two years, and no other artist that worked on the book is able to come close to his brilliance. There are a handful of issues illustrated by Tom Sutton, who brings his own ghoulish ambiance to the proceedings, but the bulk of the second half of the book is drawn by Don Perlin, whose art is simply too superhero-ish to maintain even a hint of atmosphere. (Perlin varies wildly, depending on who is inking him. He shines brightest when finishing his own pencils.)

The writing takes a severe turn for the worse when Doug Moench takes over the book. As a personal aside, I have to say that, despite being born in 1970, I find most Marvel titles from that decade to be unreadable. Stan Lee, Len Wein, and Gerry Conway seem to be all that I can tolerate. Most Marvel scribes from that era drone on and on and on, filling each page to bursting with words, until they threaten to spill forth from the binding. I don't make this assertation lightly.....I love to read. I don't pick up a novel and sniff disdainfully at it because it has too many words. But Marvel in the '70s....TOO MANY FUCKING WORDS. Moench drones on and on and on, making each pace a herculean chore to finish. This book took me forever to read, because I would slog through a hundred pages or so, and just start to zone out. I'd read a page, check my e-mail, read a few pages, check a website or two, read a little, play with my phone......by the end of this nearly 1,200 page monster, I could not....fucking....wait....for it to end.

I would love to ask Moench what kind of powerful hallucinogens he was under the influence of when he created "The Amazing Doctor Glitternight", a flying, blind, bald sorcerer who shoots beams out of his chest while he glides around like a flying squirrel.

Or "The Plunder of Paingloss", which features....I don't even know what the fuck it features. It was fucking horrible. Wizards from another dimension kidnap The Werewolf, and he teams up with a glowing black guy, and they fight mute dwarves who ride giant slugs, and a giant robot-statue, and FUCK ME, WHO ELSE BUT ME WOULD SLOG THROUGH THIS SHIT, I ASK YOU????

The sad thing is, the terrible "Paingloss" story has a promising premise, as Jack and his friend seek out a Satanic priest, hoping to find a cure for Jack's affliction. Could have gone somewhere, but.......Moench is nuts.

There are a few gems, such as the crossover with TOMB OF DRACULA, a crazy battle with Spider-Man, and a complete ripoff of THE LEGEND OF HELL HOUSE. I also got to finally read the LEGION OF MONSTERS story that I've always wondered about, and it is as batshit crazy and awful as you would imagine it to be.

To say that this is a mixed bag would be an understatement. I love the idea of this book more than the book itself, but there was enough good stuff early on that it almost balanced out the bad, the ugly, and the terrible that comprises most of the collection. I'm glad that I read this, but I'm even more glad that it's over.

WEREWOLF BY NIGHT OMNIBUS has a bark that is louder than it's bite, and earns an anemic five out of ten full moons:
🌕🌕🌕🌕🌕

Posted by The Crabby Reviewer at 3:42 PM