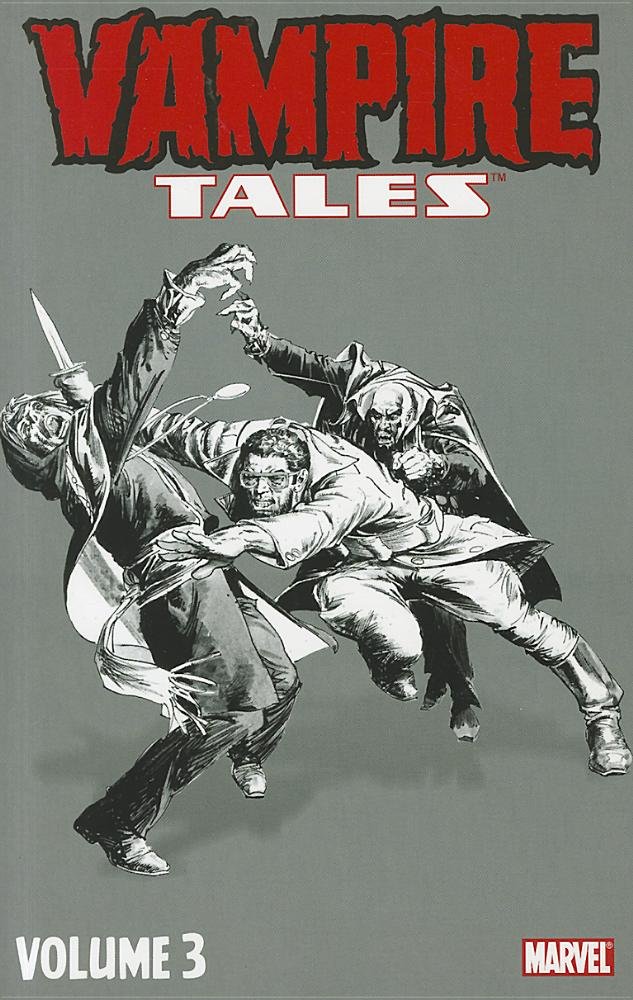 I enjoyed these three volumes waaaaay more than I thought I would. I hope Marvel eventually gets around to collecting all of their old black-and-white magazines, because I've loved what I've read of them so far. VAMPIRE TALES, VOLUME 3 starts off with an announcement that diminished my enthusiasm a little bit, but the quality of the stories made sure that this volume shared the same rating as the last two.

That announcement was that the text features that I enjoyed so much were scrapped from the magazine with issue #8, which is where this collection starts off. The text features were a unique aspect, and one that I greatly enjoyed, and I can't help but wonder if their exclusion contributed to the demise of the series with issue #11.

Regardless, the all-comics version of VAMPIRE TALES managed to maintain a high level of quality, anchored by Morbius, The Living Vampire and Blade, Vampire Hunter, and featuring work by Tony Isabella, Ernie Chan, Don McGregor, Mike Vosburg, Frank Charamonte, Gerry Conway, Joe Staton, Alfredo Alcala, Marv Wolfman, Paul Gulacy, Bob Larkin, Tony Dezuniga, Don Heck, Al Milgrom, Chris Claremont, and Larry Lieber, among others. The writers tried, and for the most part succeeded, in getting away from the traditional (predictable) bloodsucker yarns, mixing things up with a story about a time-tossed vampire in an idyllic future, and a great twist-ending shocker about a desperate vampire who is running out of victims. Doug Moench takes over the Morbius strip from the navel-gazing Don McGregor, and makes each story a blood-drenched epic. Morbius has never been done better. While the previous two volumes were dripping in Satanism, this volume places a peculiar emphasis on addiction, and the pains of withdrawal, all of which occurs in Doug Moench-penned stories. Almost makes you wonder if Moench was writing with first-hand knowledge.....Regardless, he is in fine form in this volume.

I had to run to Wikipedia when I reached the last page to see if there were any more issues published, but, alas.....VAMPIRE  TALES ended with issue #11, which means that we've reached the end of the line in our Crabby Monster Marathon....a tad too early for Halloween, but....we still have plenty of time for more monster mayhem. If you'd like more Horror, drop me a line and let me know.

Posted by The Crabby Reviewer at 4:33 PM