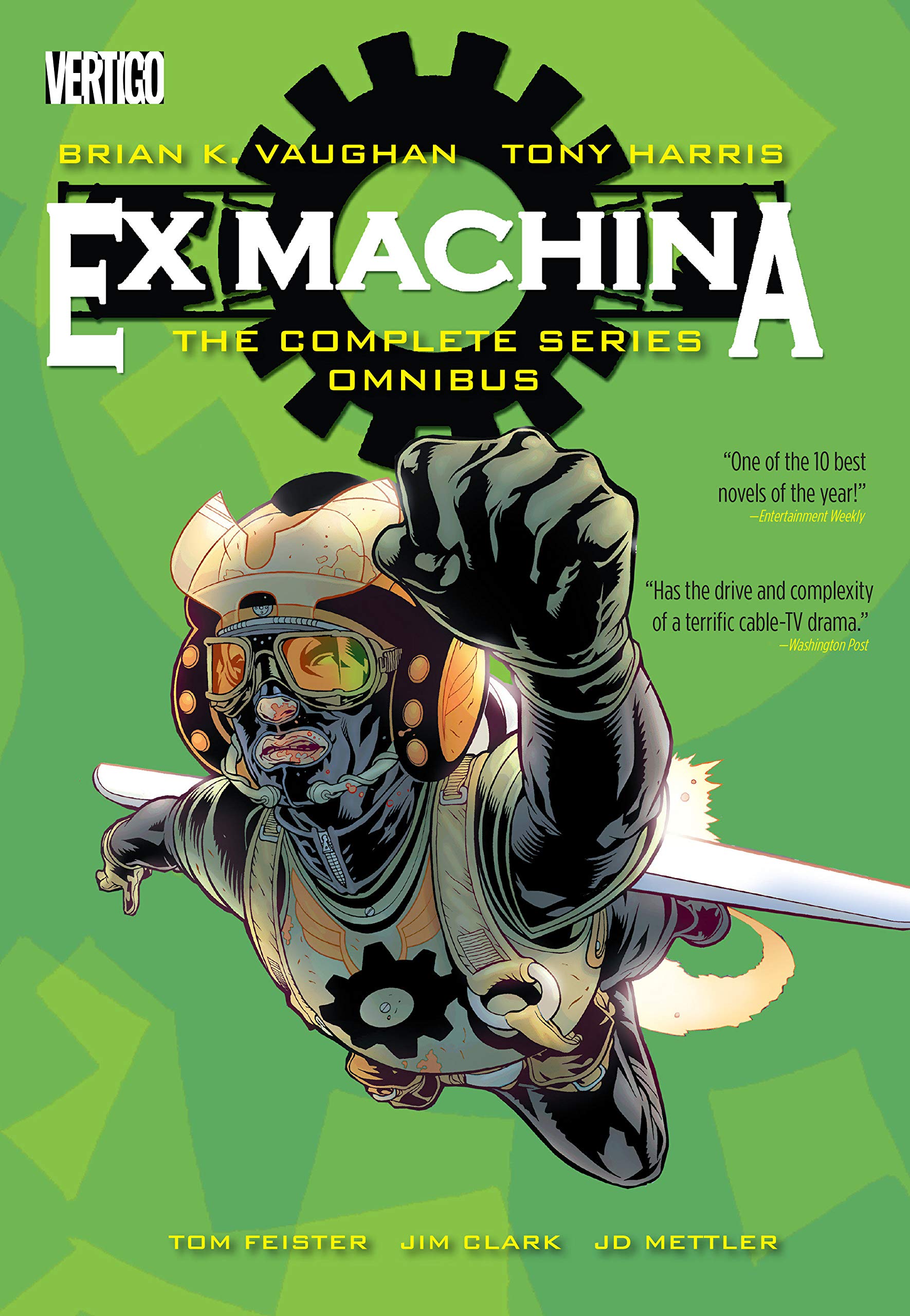 One of the most perfect series in the history of comics....?

One of the curses and blessings of my particular method of reading comics is this: I got bogged down in my reading for a decade or so (Dating, marriage, home ownership, becoming a father...), but the buying continued unabated. So, once I managed to get life under control, and find a way to squeeze in some decent reading time at least a few times a week, I found myself with a backlog that stretched back for a decade-and-a-half. (The oldest comic in my backlog is issue two of one of the many THIRTY DAYS OF NIGHT mini-series, from 2004.) As I accept books for review, and take on proofreading jobs, the backlog of books that I bought to read for myself just keeps growing. The good part of that (Not good for my wallet, but good as a reader...) is, while I have a few dozen issues of EX MACHINA, for example, sitting unread in various piles, collections and omnibus editions are continually being released, allowing me to bypass floppies that I have long since lost track of, and read the whole thing in one big bite.

And what a bite this was.

I started reading EX MACHINE: THE COMPLETE SERIES OMNIBUS on Wednesday. I was home sick, and I just sat and read all afternoon. I read more at night after the kids were asleep. I thought about the book all day on Thursday at work, and sped home to get a few hundred pages in before I had to start dinner. I read Friday afternoon while I did laundry after work. I dreamed about the freaking book while I slept. I stayed up until 3 on Saturday night reading, and only stopped because I fell asleep reading it. Then I leaped out of bed at 9 and read through until almost 4 on Sunday, because I could not go back to work tomorrow without knowing what the hell was going on and how this all turned out. Almost fifteen-hundred pages in  five days....for me, that is unprecedented. (Compare that to the WEREWOLF BY NIGHT OMNIBUS, which had a few hundred less pages, and took me nearly two months to complete.) You often hear people say that they stayed up all night reading, this or that book was a page-turner, they read something in one sitting......that's not me. I read a lot, but I have a short attention span, so I usually have between two and six books going at once, and I jump around as I get bored. I rarely stay up reading past the point of exhaustion, and I never think of calling in sick to finish a book, which is what I was pondering doing tomorrow if I couldn't finish this collection today.

For the uninitiated, EX MACHINA is the story of Mitchell Hundred, a New York City engineer who is called in to look at a strange device found clinging to the side of The Brooklyn Bridge. The mysterious device explodes, injuring and mutilating Hundred, who then finds himself imbued with the power to talk to and control machines. A comic-book fan since his childhood, Hundred decides to build a suit that will enable him to fly, and uses it to fight crime. The series begins after Hundred has retired from his short crime-fighting career, and has just been elected Mayor of New York City. A standard comic-book would have Hundred sneaking out at night to fight crime, but creators Brian K. Vaughan and Tony Harris have more in mind than that. Writer Vaughan starts at the end, with a devastated Hundred telling the story of his time in office, and flash back to various points in Hundred's life, weaving a complex narrative that is part political thriller, part police procedural, part science-fiction epic, and part I-ain't-telling. What I will say is that this series went places that I was not expecting, and had some real GAME OF THRONES style twists and turns.

Also like GAME OF THRONES, Vaughan and Harris bring their readers along slowly, starting the story as one thing, before slowly allowing it to morph into something else entirely, allowing readers who might not have been on board had that been the status quo from the beginning to slowly warm up to the idea. (I was greatly impressed by how GAME OF THRONES was able to attract viewers that would otherwise have balked at a hard fantasy series. I was a fan of the books, so I was all in for the HBO series, but I watched week in and week out as they lured my wife in with what was basically an epic period drama, and slowly opened her up to accepting things that she ordinarily wouldn't. The idea of dragons turned her right off, but they brought the concept along slowly. First, they were long-extinct. Then they showed the bones. Then they found some eggs. Then the eggs hatched. But they were little and cute.....I remember my wife saying "If they were giant dragons, and she was riding around on them, I'd be out. But they're small throwbacks....I can live with that." Before long, my fantasy and horror hating wife is watching an epic about dragon-riders fighting the living dead. Beautifully done! Which is what Vaughan and Harris do here. I would have been on board with where this series goes, happily so, but I know a lot of other potential readers that would never have checked this book out if that was part of the story from the get-go. I'd love to say more, but......go read this series.)

Is this collection perfect...? No exactly. It falls just shy of the elusive perfect ten. But it's easier to sustain perfection in twelve issues of WATCHMEN than it is over fifty-four issues, which is what EX MACHINA ran. Losing half a point due to a slow patch or two is barely worth mentioning. What IS worth mentioning is that EX MACHINA stands among the best that comics has to offer. Right up there with WATCHMEN, SANDMAN, Moore's SAGA OF THE SWAMP THING...true groundbreaking literature, with a beginning, middle, and, something that very few comics ever get to have: an ending. One that made me go back and reread chunks of what had gone before, and one that I will probably be pondering and turning over in my mind for weeks and months to come. I cannot recommend this book highly enough.

If my opinion has ever influenced you.....buy this book.

Posted by The Crabby Reviewer at 2:19 PM