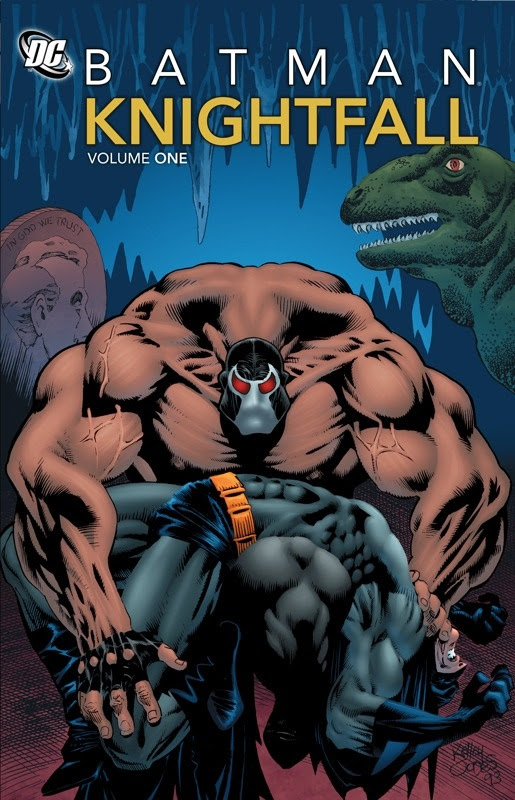 It all started here: DC's infatuation with crippling/incapacitating their heroes and replacing them with inexperienced/crazy/evil newbies.

DC has been to this well too many times to count over the past few decades, but it pretty much started with BATMAN: KNIGHTFALL and THE DEATH AND RETURN OF SUPERMAN. DC presents the entirety of KNIGHTFALL in BATMAN: KNIGHTFALL, VOLUME ONE, which was released in 2012 to cash in on Bane's THE DARK KNIGHT RISES role.

As usual, DC's collected editions team fumbles the ball right out of the gate. The book starts off with the one-shot BATMAN: THE VENGEANCE OF BANE, by Chuck Dixon, Graham Nolan, and Eduardo Barreto. Dixon does a masterful job here, introducing Bane, his underlings Trogg, Zombie, and Bird, giving Bane a full origin in the process, and sending the quartet to Gotham, laying the groundwork for Bane's obsession with Batman. Modern-day writers would have milked this story for about 10 or 12 issues.

So far, so good. But then comes the aforementioned ball-drop:  From VENGEANCE OF BANE, we head right into BATMAN #491, the prelude issue to Knightfall. And we're immediately thrown into a bunch of flashbacks/references to things that we haven't seen. We just saw Bane have his first confrontation with Batman.....yet we've somehow missed Bane beating up Azrael (To say nothing of the fact the we don't know WHO AZRAEL IS!!!), Bane almost getting The Riddler killed, Bane breaking Killer Croc's arms, as well as the run-up to the crossover, which finds an exhausted, mentally and physically drained Batmen fighting for his life. WHY is Batman in such rough shape...? Put it together yourself, because DC left out a slew of issues that would make all of this a much smoother read. More on that later.

What IS here works quite well, for the most part. For the uninitiated, Bane's master plan involves breaking all of the inmates out of Arkham Asylum, and forcing Batman to run a gauntlet of his worst enemies, bringing him to the brink of collapse, before Bane himself will step in and confront him. Most of Batman's huge rogue's gallery is represented, with the exception of The Penguin, and writers Doug Moench and Chuck Dixon, coordinated by editor Denny O'Neil, do a great job of making the story flow smoothly- There are really no continuity issues to speak of, which is a huge thing in a multi-book crossover like KNIGHTFALL.


The chinks in the collection start to show once Bane breaks Batman. (A sequence that is horrifyingly illustrated by Jim Aparo....Man, if there was ever a better Batman artist....Well, there wasn't. Aparo was the man, as far as The Dark Knight Detective is concerned.) Once Azrael takes up the mantle of the bat, there's talk of "The System", Azrael's bizarre training/brainwashing, and cryptic flashbacks to the BATMAN: SWORD OF AZRAEL mini-series, which really should have been included. Nothing truly fits without knowing who Azrael is, how he came to know Batman, how his skills work...it's all a big blank, made worse by the fact that you can't easily buy the SWORD OF AZRAEL collection, because it's long out-of-print. Sloppy collecting, DC.

I was there when this was all being originally serialized, so I can put the pieces together...I don't think new readers will have as easy a time of it. That said, this is a big, chunky book, and you get a lot of bang for your buck. It tells a (relatively) complete story, ending at a very satisfactory place, and setting the second volume up nicely.

Overall, BATMAN: KNIGHTFALL, VOLUME ONE is a strong book, with very few weak links (There's a three issue Alan Grant/Bret Blevins SHADOW OF THE BAT arc that's just awful...), but the narrative momentum is strong enough to overcome a few bad patches. The final showdown between Azrael and Bane is a showstopper, and is a perfect way to end the book. This first volume collects 24 issues worth of material, and is basically a full-color equivalent of a Marvel Essentials book. The paper is plain old newsprint, but the reproduction quality is good...Overall, I had no complaints. If this were Marvel, I'd say that there would probably be a deluxe omnibus coming, for those that want better paper and production values, but it's DC, so I'm thinking that this might just be your only real chance to own this storyline for the foreseeable future.


Posted by The Crabby Reviewer at 6:02 PM