I Have A Bad Feeling About This, by Jeff Strand 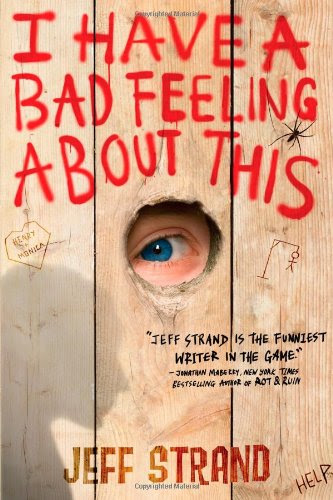 I remember how it felt being schlupped off camp when I was a kid....lonely, lost among strangers, far from home, dangerous, hellish woodlands filled with ferocious, flesh-eating beasts hungering for my blood....at least there were no gangsters looking to shoot my sorry butt.

Hapless nerd Henry Lambert, with best friend Randy in tow, is sent to Strongwoods Survival Camp, which promises to build boys into men, making them stronger, more confident, and better equipped to face the world.

In reality, Strongwoods is a small, ramshackle camp run by a loveable lunatic named Max (At least he's loveable to me...but then again, I'm not at his camp.), who is destined to be portrayed by Stone Cold Steve Austin when I HAVE A BAD FEELING ABOUT THIS makes it's way to the silver screen. (Get busy with this, Hollywood!! Make it happen!!!)

As Henry and Randy struggle to please the over-the-top Max, Strongwood's owner, Lester, who is heavily in debt to a gangster named Mr. Grand, is given an ultimatum: Pay or die. The wily Lester manages to convince Mr. Grand that the money is at Stongwood Survival Camp, and soon Mr. Grand, hired muscle in tow, is off to demand his money from Max, who knows nothing about any of this. Grand and company arrive right in the middle of Strongwood's Survival Games, and the stage is set for a bizarre, hilarious melding of LORD OF THE FLIES, SURVIVOR, THE HUNGER GAMES, and DIARY OF A WIMPY KID.

Anyone who has ever read Jeff Strand knows they're in for a good time whenever they crack open one of his books, and I HAVE A BAD FEELING ABOUT THIS is no exception. I rarely laugh when I'm reading, but this book had quite a few laugh-out-loud moments. This is a young adult book, but aside from some humorous violence, and a (mostly-offscreen...) murder, I wouldn't have any problem giving this to my eleven-year-old daughter. If she was interested in anything that didn't involve pink fluffy unicorns dancing on rainbows. Maybe Jeff could write a book about them next. Until then, I will continue to extoll the virtues of Jeff Strand, and his delightfully twisted books.

The publisher provided a review copy.

Posted by The Crabby Reviewer at 1:17 PM