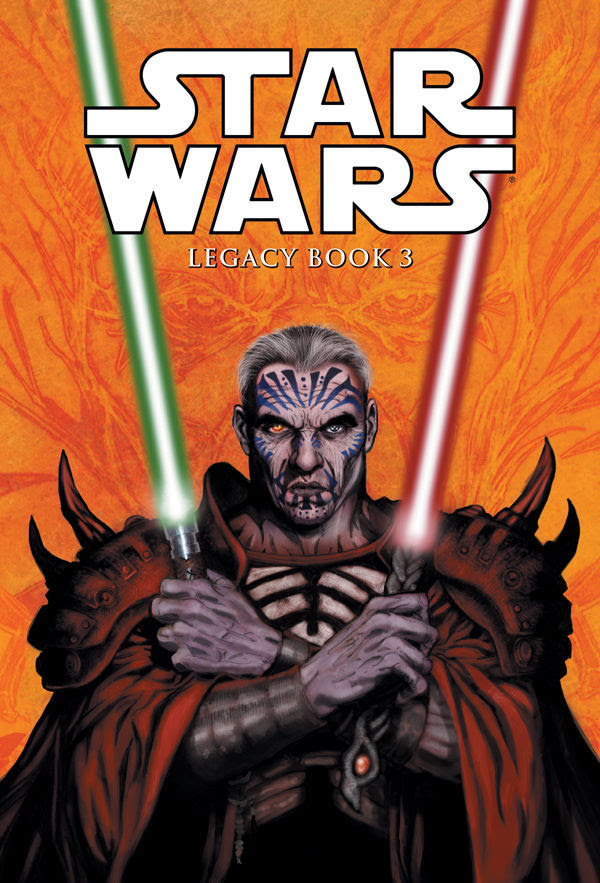 
Six days after starting my STAR WARS: LEGACY marathon, I've come through the other side..older, wearier, but satisfied that I've read something that has (slightly) rekindled that old, dormant fire that George Lucas snuffed when Darth Vader screamed like a little girl nine years ago.....

As seen in my reviews of LEGACY volumes one and two, I've considered the series to be a mixed bag. Some very good, even great, parts, and some overcomplicated and boring stretches. My rule of thumb has been that if it's illustrated by Jan Duursema, it's great. The good news is that Duursema illustrates this entire volume. The better news is that it's ALL great, this time out.

It all comes together here...everything loose strand and dangling thread is masterfully woven into a rich, complex tapestry. (Well, almost everything...I don't think he ever revisited that Mandalorian guy from that one stand-alone issue that was collected in Volume 2. But then again, I didn't really care that much, so...) The various factions (Jedi, Empire, and the remnants of The Alliance) all come together in a last-ditch push against Darth Krayt and his Sith Empire. (That could probably be considered a spoiler...yes, he's alive here, despite what happened in Volume 2. But if Dark Horse really wanted that to be a surprise, they maybe shouldn't have put him on the cover. Right?)

The final section of this collection, entitled "War", is perhaps one of the most cinematic, epic comic-books that I have ever read. It brought back all of the excitement that I felt as a kid, sitting in a movie theater in Queens with my Uncle Bob, watching the rebels attack the Death Star. This is GREAT stuff...the kind of book you want to tear through at a breakneck pace, but also want to slow down and savor so that it doesn't end too quickly. I sincerely hope that Marvel extends an invitation to John Ostrander when they take over the Star Wars license in a few years. (I doubt they will, but let me at least hope...) My one small, small beef is that the final battle was a little too cerebral, and a little too fast. I was hoping to see Jan Duursema illustrate an epic lightsaber fight for the ages. As it stands, she did get to illustrate a three-volumes-in-the-making stand-up-and-cheer moment that rivaled Han Solo's last minute appearance at the end of A NEW HOPE.

Can you tell that I loved this? I loved it. This volume made all of the slow moments worth it.....Ostrander masterfully pulled it all together, Duursema cranked it up to 11, and I was blown away. This is a team for the ages, and I hope they have a lot more collaborations up their sleeves. Bravo, Dark Horse...Bravo, John Ostrander...Bravo, Jan Duursema. Ya did good. The Force will be with you...always.

Posted by The Crabby Reviewer at 3:32 PM