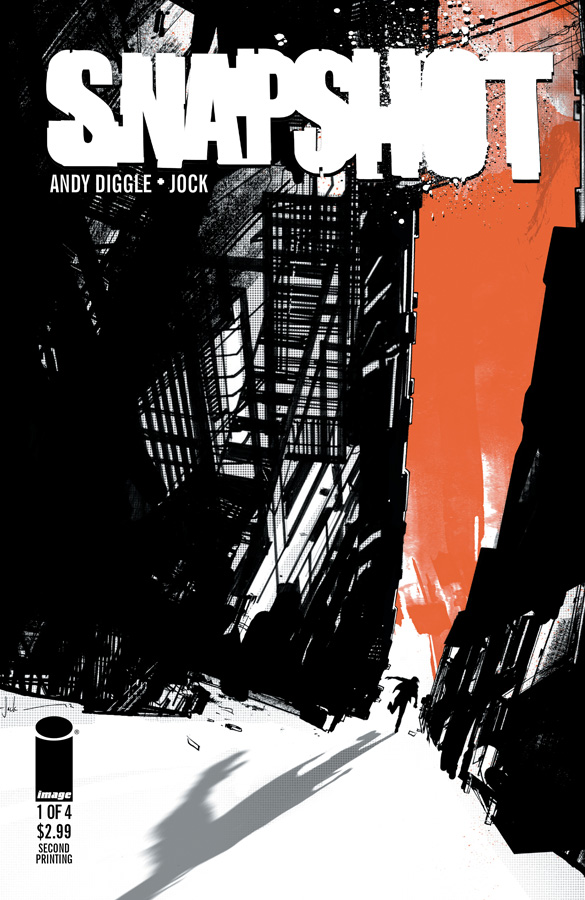 From the "Wasted talent files"....
Man, did Andy Diggle impress me with THE LOSERS. After that, I was down for anything that Diggle wrote. And most of it was mediocre. SNAPSHOT, his latest collaboration with artist Jock, goes past mediocre and into hilariously bad.

The back-cover blurb presents an intriguing scenario: A young comic-shop employee finds a cell phone which contains pictures of murder victims. The murderer wants his phone back.....

Remember that scene in THE MATRIX RELOADED where that old guy bloviates about what The Matrix really is...? And everyone in the theater was like "Wha...?"

Diggle takes a perfectly serviceable plot, and bogs it down with faked murders, indentured servitude, "Occupy"-style protests, and the mother of all conspiracies. I can already picture Shia LeBeouf  starring in the film adaptation.

This is, not to mince words, an execrable piece of shit. Suspension of disbelief is one thing. This book suspends disbelief, then decides to beat it up, rape it, set it on fire, and piss on it to put it out. And no one in America would walk into a store and ask "Do you keep stationary...?" ("For hours at a time." "Some days we barely leave the couch.") Ummm....yeah. No.

The art, by Jock, is scratchy and nondescript, and the ending just defies all belief, even managing to outdo all of the other jaw-dropping "Get the fuck out of here...." moments that we've already witnessed.

This is bad, bad stuff. And probably my last Diggle book.