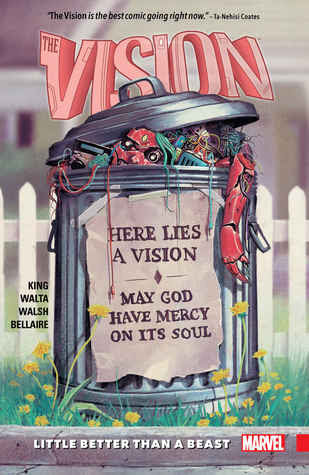 When the first volume of this series ended, things were...not good.

The situation does not improve in this volume.

The Vision's wife, Virginia, has taken the life of The Grim Reaper, covered up his murder, put another man into a coma, and indirectly caused the death of that man's son...the same young man that her daughter, Viv, was in love with. Virginia's mind seems to be going sour. The deteriorating family dynamics cause Tony Stark to place The Visions under house arrest, but Tony has another ace up his sleeve, an ace that may just lead to the disastrous ending that he is trying to avoid...

When reading the first volume, it occurred to me that, while I was undoubtedly reading a great story, I might also be reading a story that The Vision might not be able to come back from. Things were going too far, and he might, by the end, become an irredeemable character. Tom King confirms those fears, but manages to add a few wrinkles to the tale, resulting in a most unexpected, yet wholly satisfying, ending.

The Vision has never been the most interesting character. Neither was his ex-wife, The Scarlet Witch. Tom King breathes new life into both of them in the first chapter of this volume, which gives the cliffs notes version of their courtship, marriage, and breakup. (I'm not up to the John Byrne era of AVENGERS WEST COAST in my massive AVENGERS reading marathon yet, so I don't know how many of the events in this issue are new, and how many were previously shown. Regardless, writer Tom King delivers a heartbreaking relationship trajectory. It was actually a tough issue to read.) The remainder of this volume, which collects THE VISION #'s 7-12, marches readers towards the inevitable confrontation with The Avengers, as they attempt to prevent The Vision from committing a murder that is, in his coldly logical view, an absolute foregone conclusion. I had no idea how Tom King could possibly wrap this story up, and still leave The Marvel Universe with a salvageable, usable character. He pulled it off, and managed to deliver a satisfying conclusion in the process.

The art, by  Michael Walsh and Gabriel Hernandez Walta, suits the story perfectly. The quiet moments are wonderfully depicted, and the action sequences brim with dynamic poses and fluid action.

This is a truly outstanding book...I could use such words as heartbreaking, touching, moving, beautiful. I'll settle for using two: Buy this.

Posted by The Crabby Reviewer at 7:59 PM