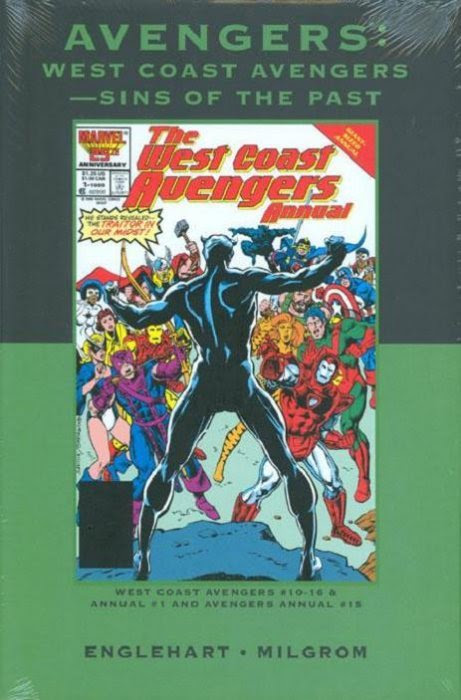 I covered a large chunk of this book (The crossover that ran through two annuals) here, so I'll just be dealing with WEST COAST AVENGERS #'s 10-16 in this review.

The last volume ended with The Thing joining the team, so this volume, naturally, starts with him running away from the team, for reasons never explained, or not explained in this collection. For some reason, they don't even SHOW ol' bashful Benjy...he is always depicted in shadow. I tried looking the reason for this disappearing act on Wikipedia, but...no luck. Then I thought: Do I really care that much? No. Moving on!

Wonder Man gets a new costume....

As I said earlier, this is a truly dopey book, but the clean, uncluttered artwork of Al Milgrom and Joe Sinnott is easy on the eyes, and the book does have a fun tone to it. I had dropped out of comics right around the time that these issues were first published, so this was all new to me. Hardly an undying classic of a read, but it is kind of fun, in a "switch off your brain" kind of way.

Posted by The Crabby Reviewer at 4:36 PM