Dark Days: The Road to Metal

I'll preface this review of DARK DAYS: THE ROAD TO METAL by saying that I'm not much of a fan of Scott Snyder's writing. From AMERICAN VAMPIRE to BATMAN to ALL-STAR BATMAN, with many other projects in-between, I have never read anything that made me think that this man is deserving of the hype that surrounds him. I had already decided to spare myself any further pain and opt out of reading anything else by Snyder in the future, but then DC came-a'callin' with an offer of review copies of the entire METAL event. Which was spearheaded by Snyder..... 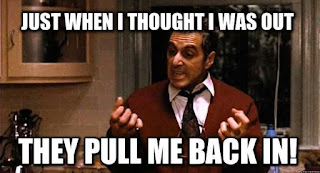 I had heard a lot about METAL, before, during, and after it was released, and, after all of the hype and attention and reviews....I still had no idea what it was about, save that in involved Nth Metal, tied up Snyder's BATMAN run, and involved a lot of characters. Having read this prelude book, I still have no idea what METAL is about.

THE FORGE and THE CASTING one-shots are typical Scott Snyder nonsense. Something terrible is going to happen, but he doesn't share exactly what that something terrible is with the reader. Flashbacks, flash-forwards, weird continuity implants, and lots of other weird shit that makes no sense (Batman has The Joker imprisoned in an impenetrable vault in The Batcave? The Joker can kick Green Lantern's ass? More of this fucking useless Duke Thomas character???), and a cliffhanger that means nothing......In all honesty, these issues should have been included in the hardcover that collects the METAL event, as they seem to be essential reading for that story, even though I just read them and have no...fucking...clue what they mean or how they tie-in. This whole volume is basically a shameless cash-grab by DC, since these prelude issues don't tell anything near a complete story, and the remainder of the book is a jumble of random issues, most of which make no sense out of their respective larger story arcs, which are ostensibly connected to METAL, but....since you don't know HOW they're connected, and you don't even know what METAL is about....none of them make any sense. The entirety of FINAL CRISIS made no sense to me at all, and I read all seven issues and all of the necessary crossovers and one-shots. What chance does a new reader have when all they get are the final two issues in this collection. And the other issues....Why is The Joker immortal? What happened to Alfred's hand? What are The Court of Owls? Why do Nightwing and Robin have mutant doppelgangers? Why was Bruce Wayne around in caveman days? You'll find no answers, or context, here. Shame on DC for not providing any editorial content whatsoever...a text page or two could have made this a good jumping-on point for new readers, which DC courted heavily with their multimedia ads for METAL's collected editions. This is just a hot mess of nonsense, and I pity any new reader trying to tackle this book.

DARK DAYS: THE ROAD TO METAL earns a head-shaking four out of ten confused readers:
😕😕😕😕

Posted by The Crabby Reviewer at 1:23 PM