To Infinity...AND BEYOND!!!, Part Seventeen: The Infinity Gauntlet Companion 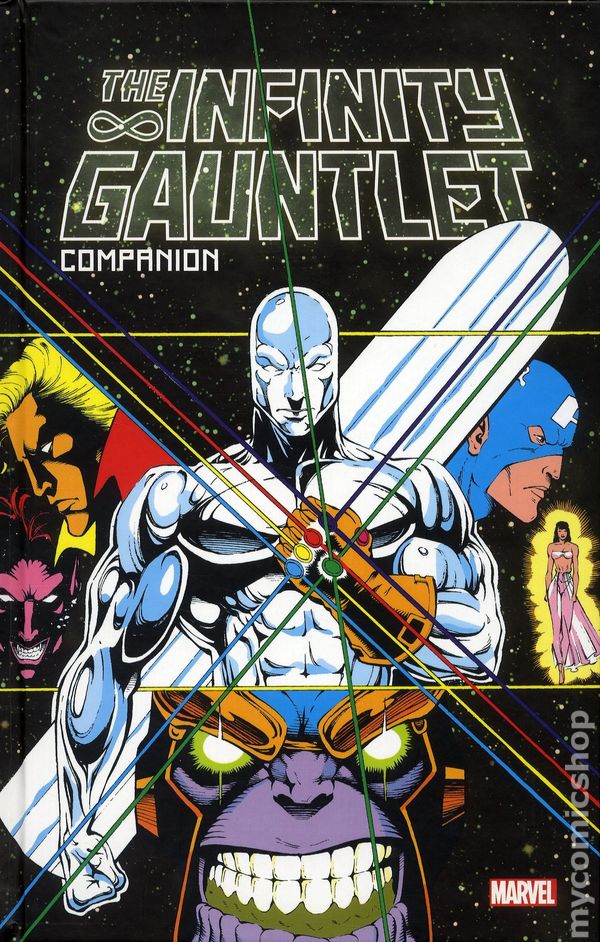 Ever hear of "The Law of Diminishing Returns"....?

Because the volumes in THE INFINITY GAUNTLET BOX SET are proof of that law. For the most part, the quality, and my interest, diminished with each passing volume. The final volume of the set, THE INFINITY GAUNTLET COMPANION, is especially disappointing for a variety of reasons, not the least of which is the lack of new content. The only other Marvel box set that I own, SECRET WARS, had a final volume that had a lot of new content, and I expected the same of this box set. Not the case. On the other hand, Marvel never said anything about original content, so....not their fault.

This is kind of a catch-all volume, collecting all of the Thanos/Infinity Gauntlet odds-and-ends that didn't fit elsewhere.

First up is THANOS ANNUAL #1, which is probably the highlight of the collection. It serves as a lead-in to THANOS: THE INFINITY REVELATION, however, so it doesn't really feel like a complete story.

Next up are a trio of WHAT IF... issues: The first is written by Ron Marz, and postulates an Infinity Gauntlet in the hands of The Silver Surfer. Marz does his usual capable job, and this is one of the better WHAT IF... issues that I've read. The second one envisions the Gauntlet in the hands of The Impossible Man, and is much better than I expected. I've never heard of writer Thomas Virkaitis before, but he did an outstanding job on this issue, mixing comedy, drama, and emotion perfectly. The third is just odd.....Remember the "New" Fantastic Four, composed of Wolverine, Ghost Rider, The Hulk, and Spider-Man? Well, what if Ghost Rider died, and Iron Man replaced him, and then they fought Thanos? It was worth reading just to see who defeated Thanos, and how they did it. Otherwise, skippable.

There are a trio of WHAT THE..?! issues spoofing THE INFINITY GAUNTLET; The first is terrible, the second is pretty funny.

From there, we get four issues of 2010's THE AVENGERS: INFINITY GAUNTLET, which is an odd duck. It seems to be an out-of-continuity book aimed at younger readers. This one had a more humorous bent, and actually had me laughing a few times. Points for sneaking in an appearance by U.S. 1, who I never expected to see again.

If one good thing came out of this unremarkable volume, it is that I have learned to avoid the work of writer Gerry Duggan, who seems to be a current Marvel golden child. His work here, in the 2016 SECRET WARS spinoff THE INFINITY GAUNTLET, was abominable. I had virtually no clue what was going on at any time in this five-issue mini-series, thanks to Duggan's atrocious dialogue and the muddled, incomprehensible art by Duggan's co-plotter, Dustin Weaver. Weaver is a terrible visual storyteller, and the plot, about a family who takes up the banner of The Nova Corps on a decimated Battleworld Earth, is a complete misfire. A total waste of Thanos.

The remainder of the book, which is around another 200 pages, is devoted to MARVEL AGE articles, comic and magazine covers, posters, trading cards, parodies and cartoons, a handful of Fred Hembeck strips, covers and variants, pinups, and tons of original art from books that were featured in the box set. I'm really not all that interested in seeing reproductions of page after page of original art, so...your mileage may vary. I was already familiar with most, if not all, of the extras, thanks to prior collected editions of books featured in the box set.

Overall, not too thrilling a way to wrap up the box set. THE INFINITY GAUNTLET COMPANION  earns a middling six out of ten Forbush-Man frying-pan heads:
🥘🥘🥘🥘🥘🥘

Posted by The Crabby Reviewer at 2:21 PM