To Infinity...AND BEYOND!!!, Part Nineteen: The Mighty Thor: Blood and Thunder 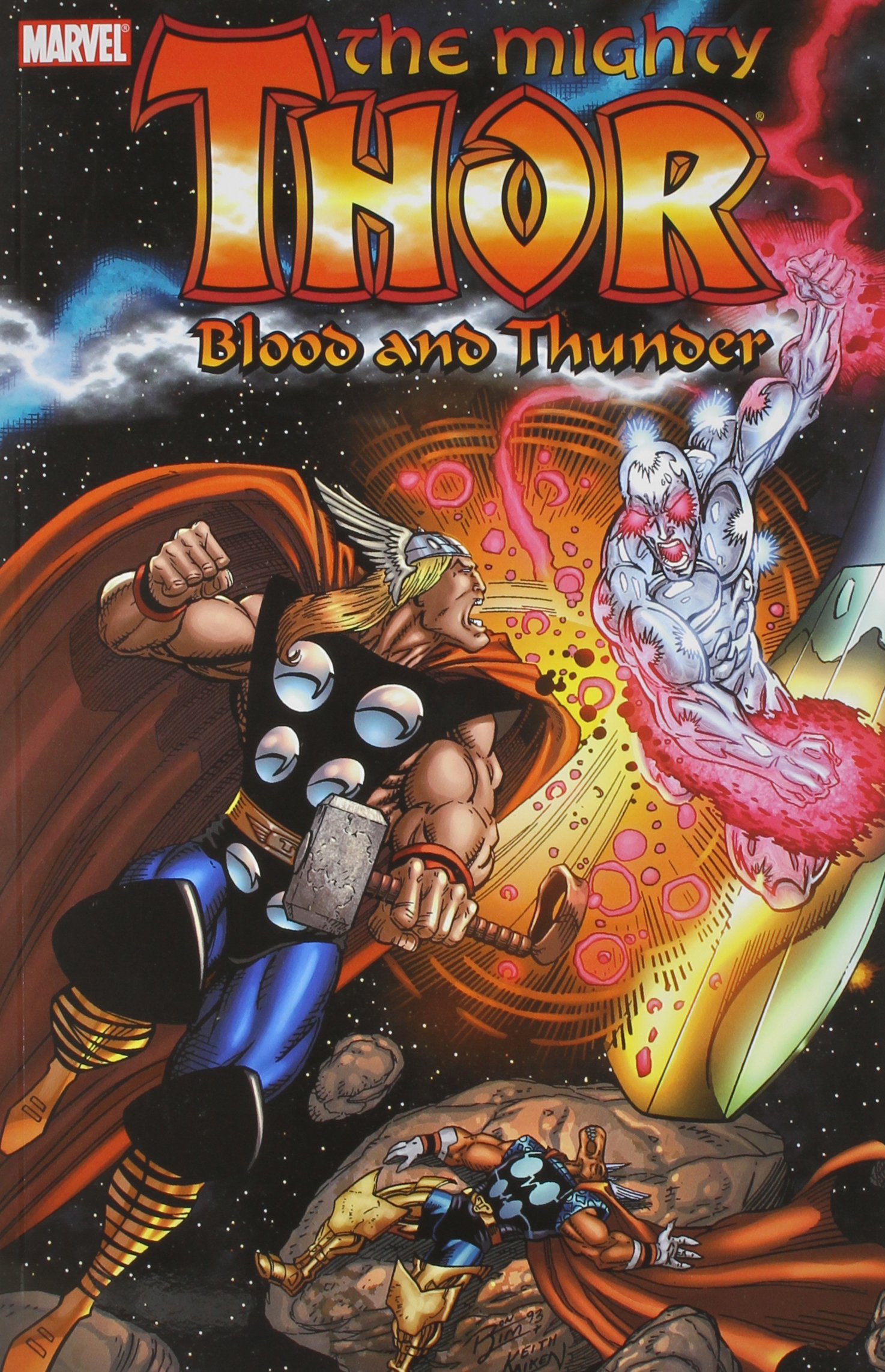 In which my collector's OCD gets the better of me, and I am forced to reread a book that I loathed the first time around.


I first read this collection in August of 2011. My thoughts on it then were as follows:

"I've been reading comics for 38 of the 40 years that I've been inhabiting this Earth, and as a die-hard Marvel Comics fan, I can tell you this much with absolute certainty: I stopped reading Marvel Comics in the '90's. I've since gotten back into the Marvel Universe, and I was tempted into buying THE MIGHTY THOR: BLOOD AND THUNDER against my better judgment, mainly due to the involvement of Jim Starlin (And his enduring creation, Thanos!) and Ron Marz.

To say that this book totally encapsulates EVERYTHING that was wrong with Marvel in the '90's would be an understatement:
Bad art? Check!
Minuscule plot stretched out over 13 issues? Check!
Incomprehensible Writing? Check!
Cover gimmick? (The original issues, not the collection...) Check!
Sprawling story that has no motivation or resolution? Check!

The plot, such as it is, revolves around Thor going crazy. Thor is nuts, a bunch of people try to beat some sense into him, Odin gets involved, all is well again.
THIRTEEN ISSUES OF FIGHTING!!!!! Literally, NOTHING BUT FIGHTING!
No character development, no subplots, no nothing!!!
JUST!!!!!
FIGHTING!!!!
Hideously illustrated fighting, to boot!

Marvel decided to collect this to cash in on the excellent THOR movie, no doubt, because I cannot imagine that anyone on Earth was crying out for this mess to be collected. Even Writer Ron Marz said in an interview a few weeks back that his work here wasn't something he was especially proud of.....Oh, if only I had listened......It's too late for me! Save yourself!!!! Go buy Roger Langridge's THOR, THE MIGHTY AVENGER, instead. You'll thank me later."

Needless to say, I didn't care for THE MIGHTY THOR: BLOOD AND THUNDER very much.

BUT.....I just finished reading THE INFINITY GAUNTLET BOX SET, which literally ended right where this collection starts. And this collection will lead right into my next one, THE INFINITY WATCH, VOLUME 2, which leaves the issues included in this volume out totally. For the sake of completeness, I clearly must reread Blood and Thunder, right? Right???? Well, no...a normal person would have thought "It sucked, so I'll just take a pass and move on!" A normal person would not have spent the better part of a day rummaging through boxes in their basement looking for this collection, and then wasted over a week of precious reading time going through it again.

I am not a normal person.

So, nearly seven years later, have my thoughts changed?

No, not really. This is still a completely unnecessary crossover. It goes on FAR too long, spends way too much time meandering into lengthy plot digressions, and is, for the most part, both poorly written AND an offense to the eye.

I was struck again by just how much of this crossover is devoted to fighting. Nearly the entire first half of this event is just Thor standing on a rock in space, waiting for various people to arrive so he can fight them. He stands on his rock and fights Beta Ray Bill and Sif. Then The Silver Surfer arrives, and THEY fight. Then Adam Warlock arrives, and HE fights Thor. Then The Infinity Watch arrives, and they fight Thor.

Things eventually move away from the rock, and then we digress for a few issues as The Watch fights trolls on Asgard. Business picks up when Thanos arrives, because......he's Thanos. It's hard to mess up Thanos. The conclusion features an epic throwdown between Thanos and Odin that I enjoyed quite a bit, but this is a four-part idea stretched out for thirteen interminably long chapters....I still cannot conceive how this crossover got the green light.

Again...save yourselves. There's nothing to see here......move on. Avoid this book. Or, if you must buy a copy, click the link below, so I'll make a few pennies off of your foolishness.


THE MIGHTY THOR: BLOOD AND THUNDER earns a shockingly bad two out of ten thunderbolts:
🗱🗲


Posted by The Crabby Reviewer at 5:03 PM