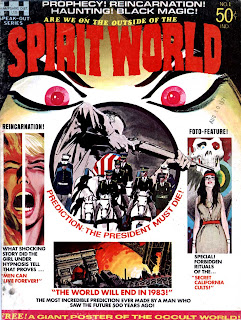 I consider the solo work of Jack Kirby (And Steve Ditko, for that matter...) to be "Exhibit A" in the case of "Who was the driving force behind the success of the early Marvel comics?" While I consider Steve Ditko and Jack Kirby to be brilliant artists and creators, it's obvious, when you compare their collaborations with Stan Lee to their solo work, that both Kirby and Ditko were hideously bad writers. If they had been allowed to script those early adventures of Spidey, The Hulk, and The F.F., there would never have been a Marvel age.
Just my opinion.

That said, nostalgia prompted me to buy this attractive, if insanely overpriced ($39.99 for a little over a hundred black-and-white pages...? Really...?) volume. SPIRIT WORLD is a neat little curiosity, and the book was worth purchasing because of Mark Evanier's Introduction, which tells of Jack "King" Kirby's attempt to revitalize the comic book industry by attempting to lure in older readers with magazines that featured  top-of-the-line production values, glossy full-color pages, and the top writers and artists of the day. So DC, of course, decides to do a low print-run black-and-white magazine, printed on newsprint, with Kirby handling all of the art and writing chores.

I grew up in the 1970's, and Kirby's work was dated as soon as it came out, let alone four decades later. This book is interesting as a historical curiosity, but that's about it. Intended as a serious attempt to explore Psychic phenomena and The Paranormal, it's mainly a mish-mash of unfocused ideas and conjecture. I am continuously blown away by the sheer wordiness of Kirby's solo work...You can almost feel him trying to ape Stan Lee's engaging dialogue and captions, and he fails miserably.

The art is pure Kirby, so your mileage will vary depending on how you feel about the man and his work. Personally, I loved the art, which is punctuated by Kirby's frequent use of collages and photographs. It's all incredibly dated, but still impressive in it's raw power.

I can't really recommend this to anyone but Kirby fanatics...I can't say that I enjoyed this book even a little bit, aside from the art. But it's worth a look as a historical curiosity, and for a glimpse at some rarely seen work by "The King".

Posted by The Crabby Reviewer at 2:28 PM