That thing lying on the floor over there...? That's the top of my head. It was just blown off by BATMAN INCORPORATED, VOLUME 1: DEMON STAR, Grant Morrison's brilliant penultimate Batman story.
Could this possibly be the BEST Batman story ever.....? (There are spoilers below.)
Yeah, I think it could.

Crabby Readers, as I affectionately refer to you, will see that I have been on a Grant Morrison BATMAN tear over the past week or so, and I can tell you one thing for sure: Morrison's work reads a lot better in huge chunks, where the puzzle pieces that he sneakily assembles are all fresh in your memory. The clues and throwaway bits are all starting to come together.....I have the final BATMAN INCORPORATED volume in front of me now, and there's no way that I could get to it tonight, but I'm seriously contemplating playing hooky from work tomorrow so I can see what happens next. But at the same time...I'm in no hurry for this to end.

I was worried about how this epic story would translate over to "The New 52", and I'm not sure how it does, actually (Aside from the conspicuous absence of Cassandra Cain and Stephanie Brown....and Barbara Gordon is still in a wheelchair during the apocalyptic flash-forward to Damian's reign as Batman....), but honestly....This story is so good that I stopped giving a shit, and that's saying a lot. When a dyed-in-the-wool comic geek of over 40 years can put continuity issues aside, you KNOW it's one good story.

Talia Al Ghul stands revealed as the leader of Leviathan, a doomsday group that has infiltrated every walk of life in Gotham (And elsewhere), and Batman must call together every ally he has to combat them. I'm not sure how long Morrison has been concocting this doomsday tale, but I suspect it's been his endgame since his first issue of BATMAN, and as a Talia does Gotham story, he blows Christopher Nolan's THE DARK KNIGHT RISES out of the water. Morrison even has his own version of Bane, in Talia's hulking bat-masked sidekick, whose true identity is mind-blowing.

I've always felt that Talia was a wishy-washy "Kinda/sorta bad girl with a heart of gold", but Morrison's take on her origin  brought new life to Ra's Al Ghul's daughter, and she's quickly risen to the top of the bat-pile.

When people ask me why I still read comics, I try to talk up books like this. Books that trade on the decades worth of history that the characters share and the connection that longtime readers have with them. A book like this can provoke a reaction that you could never get from a two hour movie or a novel, no matter how well-written it may be. (And I'm not disparaging novels...I read a ton of them. I'm merely saying that, in an exceptionally well-written comic, the weight of the characters long histories and the reader's familiarity with them lends a gravitas that you'd be hard-pressed to achieve elsewhere.) I closed this book practically dying to see what happens next. That happens pretty rarely, maybe two or three times a year, but isn't that enough to make this crazy hobby worthwhile?

This is an exceptional story in general, and a one-in-a-million Batman story. I can't recommend this enough. If DC ever gets this run collected in an omnibus or two or three, watch me run to pick up my copy.

And did I mention that, not only is there a ton of Damian, but there's also BAT-COW....? 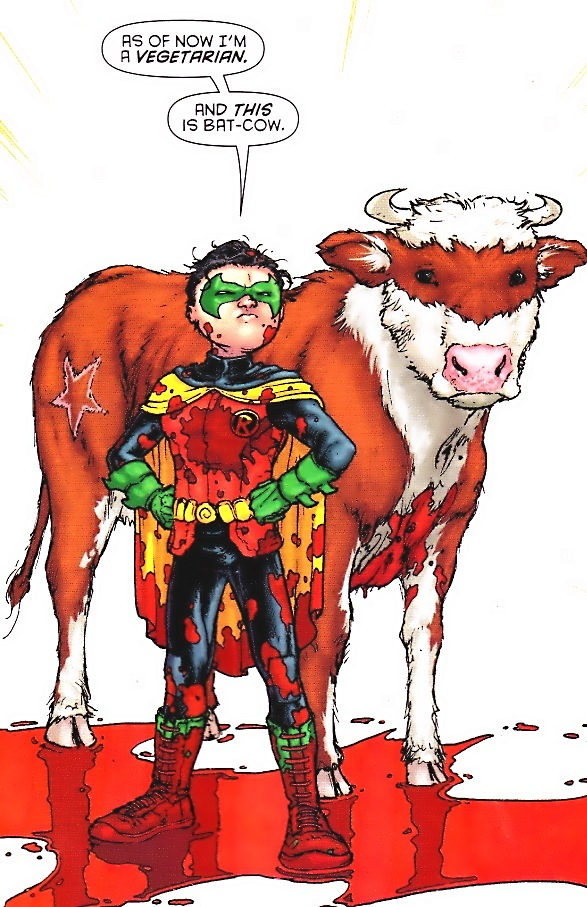 Think about that, digest it, love it.

Posted by The Crabby Reviewer at 4:02 PM