And so we close the books on Grant Morrison's seven year run on BATMAN..... 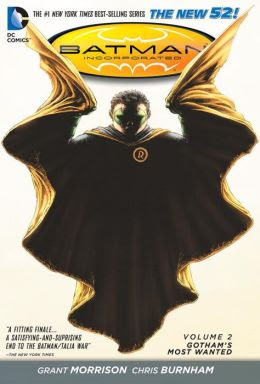 There were times along the way where I felt lost, confused, ambivalent, dizzied, and ready to throw in the towel....but by the end, I was astonished by the brilliance of it all, and swept up in the sheer thrill of what is probably the best Batman film that'll never be made, and what is definitely one of the best Batman stories ever told.

Although my gut is telling me that Morrison's BATMAN INCORPORATED books do tell the greatest Batman story of all time, I really can't stand here and point at a brand-new book and say that it's the pinnacle of Batman's career. That's a statement that'd take years of hindsight to make. For now, I'll say that it's the most fun I've ever had reading a Batman story, and it's by far the most exciting, white-knuckled Dark Knight story I've ever experienced.

BATMAN INCORPORATED, VOLUME 2: GOTHAM'S MOST WANTED picks up right where Volume 1 left off: With an unconscious Batman being hurled to his death by his hulking Son/Clone/Brother/Whatever-The-Hell-He-Is. Gotham is under siege from the forces of Leviathan, and the group's leader, Talia Al Ghul, stands poised to destroy everything Bruce Wayne has built as she ascends to the top of Batman's rogues gallery.

I'll avoid spoilers. I will say that my favorite character, Damian Wayne, gets plenty of time to shine, and his role in the showdown against Leviathan only cemented my irrational affection for this one-of-a-kind character.

I ranked GOTHAM'S MOST WANTED slightly lower than the previous volume, DEMON STAR, because the book doesn't end with Morrison's run, but instead concludes with a BATMAN INCORPORATED SPECIAL, which features vignettes of various Batman Incorporated agents (Including Bat-Cow....), which range from mildly fun to dreadful, and that last chunk of the book really dragged down the volume as a whole. It wasn't enough to ruin Morrison's epic, but it did keep me from closing the book with the same "OMG!" feeling that I had over the last volume.

The series closes out in grand style, with Chris Burnham providing a gorgeous artistic vision that compliments Morrison's outrageous script perfectly. Burnham even gets to write a couple of Batman Japan shorts as a part of the Batman Incorporated Special, one of which is a lot of fun, while the other is fairly dreadful.

So now I'm pretty well bummed out that Morrison's epic run has come to an end....but I'm also looking forward to reading in in the inevitable omnibus collections a few years down the road and getting to experience this all again in a more cohesive format. For those that will read it that way for the first time, I envy them. This is a phenomenal run, and....hell, I'll say it, and damn the consequences:
BEST.
BATMAN.
STORY.
EVER.

Posted by The Crabby Reviewer at 5:39 PM