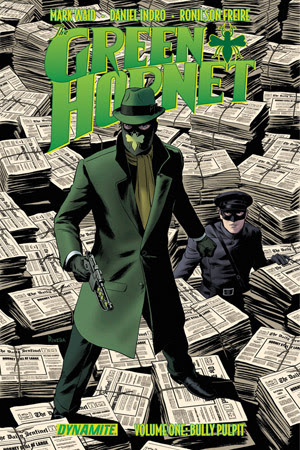 Remember the excitement that you felt hearing aliens drone on and on about trade federations and embargoes and shipping blockades when you first watched STAR WARS, EPISODE 1: THE PHANTOM MENACE...? Well, Mark Waid catches that same lighting in a bottle with his new Dynamite Entertainment title, THE GREEN HORNET, VOLUME ONE: BULLY PULPIT. Wake the neighbors, it's gonna be an exciting read!

I have to preface this by saying that I really like the idea of The Green Hornet, but I have never actually read or watched a Green Hornet story that I found even remotely entertaining. (Well, maybe the crossover the GREEN HORNET TV show had with the BATMAN show....) The Green Hornet has always seemed to suffer from the lack of a real antagonist...what good is a hero without a memorable villain? Mark Waid's crack at the character suffers the same shortcomings, as The Hornet and his much more interesting sidekick, Kato, face off endlessly against boring corrupt Politicians, boring captains of industry, and boring gangsters. I use that word repeatedly because that's what this book was: Boring.

The Green Hornet is millionaire Britt Reid, grandnephew of The Lone Ranger (A fact that is kind of alluded to in an oblique manner, which is odd when you consider that both The Lone Ranger and The Green Hornet are both being published by Dynamite Entertainment at the moment...), and publisher of a prominent Chicago newspaper, The Daily Sentinel. Reid moonlights as The Green Hornet, who is believed to be a masked super-criminal, a ruse that he uses to his advantage to clean up Chicago's rampant corruption and vice..

THE GREEN HORNET, VOLUME ONE: BULLY PULPIT is basically Mark Waid's masked version of CITIZEN KANE; Reid, while investigating industrial sabotage, is duped into running for Mayor of Chicago, so in between the frantic bursts of action, we have endless scenes of political navel gazing and rich white guys engaging in backroom shenanigans. This volume collects THE GREEN HORNET issues 1-6, and I could feel the story wrapping up as that final issue drew to a close, but somehow I was wrong, and Waid and Dynamite plan to stretch this out for (At least...) another volume. Count me out, guys.

The art is provided by Daniel Indro (Issues 1-3) and Ronilson Freire (Issues 4-6), and both display the same facility for action scenes, and the same lack of ability to make characters faces distinguishable. There were pages of rich white guys sitting around talking where I had no idea who was supposed to be who.

Mark Waid is usually a dependable Writer, so I can forgive him for this misstep, but I can't foresee any way that I'll be back for Volume Two.

THE GREEN HORNET, VOLUME ONE: BULLY PULPIT collects issues 1-6 of Dynamite Entertainment's THE GREEN HORNET series, and features their usual full compliment of bonus features, including all covers and variant covers, a sketch gallery, and Mark Waid's complete script for issue one.

Posted by The Crabby Reviewer at 5:01 PM