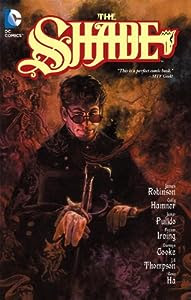 I've beaten the drum long and hard (Ha ha..."Long and hard"...) for James Robinson's phenomenal STARMAN series, which I consider to be an achievement just slightly below such lauded works as WATCHMEN, FROM HELL, and THE SANDMAN. It's an amazing, epic series, and it represents Robinson's best work. (His DC mini-series THE GOLDEN AGE is nothing to sneeze at, either.) Robinson's output since STARMAN has ranged from mildly entertaining to dreadful and embarrassing, with most of it falling into the "So mediocre that I barely remember it" category. So it was with great trepidation that I picked up THE SHADE, Robinson's maxi-series featuring one of STARMAN's most compelling, complex supporting characters. Was he going to tarnish the memory of his STARMAN run forever....?

Well, the good news is, no, he hasn't tarnished STARMAN. The bad news is that this is nowhere near as good as the worst issue of STARMAN.

The plot, such as it is, concerns The Shade's quest to discover why one or more of his descendants want him dead. This is mainly an excuse to send him on a variety of globe-trotting adventures, which take him from his beloved Opal City to Barcelona, England, France, and Australia, culminating with the revelation of The Shade's long-hinted-at origin.

This hardly bad stuff, but it does, at times, feel a bit dragged-out. The Shade is a complex, interesting character, but some of this, though intriguing at times, felt a lot like filler. There are a handful of issues devoted to "Times Past", which will surely delight STARMAN fans, and those issues are excellent, especially the finale, which finds The Shade at last recounting how he gained his powers. I'm not sure the circumstances were quite as terrible and revolting as both Robinson and The Shade have built them up to be, but it was a story well worth reading, in and of itself.

The art is handled by Cully Hamner, Javier Pulido, Frazer Irving, Darwyn Cooke, Jill Thompson, and the exceptional Gene Ha, with original covers supplied by Robinson's STARMAN partner, Tony Harris. It's a mixed bag, with Ha's chapter the standout. I usually love Jill Thompson's art, but it looked so different from her usual style here that it just didn't grab me the way it usually does. Javier Pulido's three-issue arc is beautifully done, and I continue to hate Frazer Irving's art with a passion.

I'd been on the bubble about James Robinson's work for a long time, and I'm sad to say that this didn't do much to keep me in his corner. While not a bad book, it was a fairly average one, and one that paled in comparison to his previous work on STARMAN. I understand that Robinson is moving over to Marvel Comics to take over THE FANTASTIC FOUR, and unless I hear that the move has rekindled his creative mojo, this will likely be the last time I spend any money on his writing.

THE SHADE collects all twelve issues of the DC Comics maxi-series, including all covers and variants, and includes a gallery of character designs, sketches, and unused covers.

Posted by The Crabby Reviewer at 2:05 PM