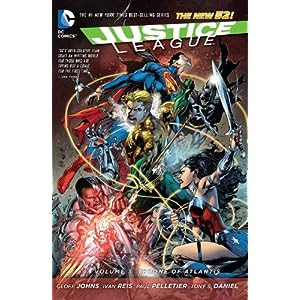 DC's "New 52" JUSTICE LEAGUE has been a mixed bag for me thus far, and JUSTICE LEAGUE, VOLUME 3: THRONE OF ATLANTIS is the first time that this team has really gelled together for me. That's probably because this collection is Aquaman-centric, and I've been enjoying his solo title a great deal. (If anyone had ever told me that I'd be enjoying an Aquaman book, I'd have laughed in their face.)

The book starts off with The Justice League helping Wonder Woman track down Cheetah, and this all seems to be leading up to something bigger, which I assume is DC's FOREVER EVIL crossover. It's a decent story, but Cheetah's power level is ridiculous (She kicks Superman's ass, AND turns him into a "Super-Cheetah", which very nearly killed any credibility that this book had up until that point. )
Luckily, things pick up once the actual "Throne of Atlantis" crossover starts. A U.S. vessel accidentally (Or is it an accident....? Muaaah ha haaaaaa!) launches an attack on Atlantis, which is all they can stands, they can't stands no more! Like the Marvel crossover of days past, ATLANTIS ATTACKS!!!, and they cause a lil' bit of damage in the process, submerging Gotham City, Metropolis, and Boston, and they're not gonna be happy until they sink of of those cities entirely. The League discovers that this "Atlantean War Plan" was actually devised years ago by Aquaman himself (Shades of Mark Waid's old JUSTICE LEAGUE story that found The League under attack by someone who had appropriated Batman's contingency plans to take them down in case they ever went rogue....), so now we're in full soap-opera mode, as Aquaman is under suspicion by his colleagues, and torn between his friends in the League and his Brother Orm, The Ocean Master, Atlantis' King. (And speaking of soap-opera, memo to Superman and Wonder Woman: GET A ROOM, ALREADY!!! Although their burgeoning relationship is kind of cute, especially when Clark buys Diana a pair of glasses as a disguise.)

This is all a lot better than I'm making it sound, especially since artists Ivan Reis, Paul Pellitier, and Tony S. Daniel do a magnificent job of illustrating the destruction and carnage of the Atlantean invasion.

DC provided a review copy, which was missing the covers and indicia, so I'm not sure exactly what issues are contained in this volume. Most online resources agree that it contains JUSTICE LEAGUE #'s 13-17, and Aquaman #'s 15 & 16. It may or may not contain Aquaman #14. I have no idea. I'm off to Comixology to get whatever issues it didn't collect, so I don't have to spend a fortune of the third Aquaman hardcover. I'm trying to be a smart consumer....

Posted by The Crabby Reviewer at 9:52 AM