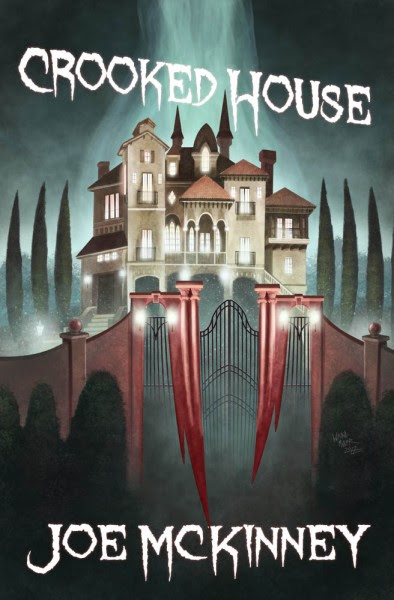 I'm a sucker for a good haunted house story, and Joe McKinney's CROOKED HOUSE is more than good, although it leans a bit closer to psychological thriller territory than your traditional ghost story would.

McKinney's story finds Dr. Robert Bell, an emotionally troubled man on the brink of financial and mental collapse, being given a lifeline by an old friend: An offer of a job at a prestigious University, complete with a practically rent-free house to live in. More than a house, in fact...Crook House is, in fact, a mansion. Willed to the University by a wealthy Alumnus, Crook House now welcomes Dr. Bell, his wife Sarah, and their eleven year-old Daughter, Angela. (Upon seeing the massive, odd conglomeration that is Crook House, Bell wonders aloud if he's being given such a great deal because it's haunted....Well, of course it is!)

McKinney eschews the traditional haunted house scares in favor of a tightly focused psychological portrait of a man who, due to various marital and job-related stresses, finds himself vulnerable to the forces that inhabit his new home. Make no mistake, there's no shortage of spooky moments on display, but McKinney wisely chooses to have them happen on the periphery of the story, allowing readers to experience the same kind of chilling "What just happened...?" encounters that the characters are having themselves.

CROOKED HOUSE is a short, masterfully executed piece of horror fiction, and one of the best ghost stories I've read in a good long while. Highly recommended.

Posted by The Crabby Reviewer at 12:26 PM