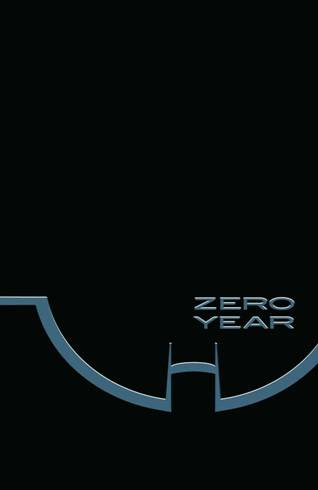 From reboot into crossover into origin story....? Is it too soon....?

Yeah, it feels like it's a little too soon to basically stop an essentially brand-new book for about a year so you can go back in time and tell an origin story. Yet that's what DC has chosen to do with BATMAN, VOLUME 4: ZERO YEAR- SECRET CITY, which collects issue #'s 21-24 of BATMAN, and the BATMAN YEAR ZERO: THE DIRECTOR'S CUT special. (This would seem to be slim pickings for a collection, but some of these issues must have been oversized, because it's around the same size as your average "NEW 52" collection...maybe a tad bigger.) Writer Scott Snyder takes your puny "Year One", and goes it one better....This is ZERO YEAR!!! Beat THAT!

I'll start with the stuff that I hated, and be warned of potential SPOILERS!!!!!!!!!!

I have always been of a mind that the presence of a man dressed up as a gigantic bat is what inspired all of the crackpots to come out of the woodwork in Gotham. Bruce Wayne essentially threw down the gauntlet, and his future rogue's gallery picked it up and ran with it. Snyder does away with that notion by having a gigantic "Red Hood Gang" already well-established in Gotham before Bruce Wayne ever returns from his world travels. (Anyone even remotely familiar with Batman knows very well who is under that red hood, so Snyder is also kind of tossing THE KILLING JOKE out of the same window he chucked YEAR ONE.) Oswald Cobblepot is also around, up to no good, as is Edward Nygma...neither one has a code-name, yet, but they're there. So that cause-and-effect is gone. Bruce Wayne becomes Batman in response to Gotham's madmen, rather than instigating them to step up their game. DC's oddly-timed release pattern has already given us a BATGIRL volume that has a tie-in to ZERO YEAR that shows a massive flood devastating Gotham, so I assume that what's behind the book's opening sequence, which depicts a scene straight out of Will Smith's I AM LEGEND. (Literally straight out of that film....it looks like a comic-book adaptation of the film.) We don't actually get up to the part of the story that addresses why Gotham is in the state that it's in, which makes me wonder if this would have been better off being collected as one big volume presenting the whole ZERO YEAR story as a whole. (I do understand that that would have A)- Necessitated that a full year pass with no BATMAN collection, B)- Meant less profits for DC by having one book instead of two, and C)- Upped the cost of that one volume significantly. So I get the decision to split the story, but I don't like it.) Snyder sets the story six years ago, which is something that nags me every time I read a "NEW 52" story- Bruce Wayne has been Batman for six years, but in that time he will: Take in Dick Grayson, train him to be Robin, face EVERY VILLAIN IN GOTHAM for the first time (And many of them multiple times...), take in Jason Todd, train HIM to be Robin, see Jason killed by The Joker (Is that still canon...? My head is spinning...), watch Dick become Nightwing, have a baby with Talia Al Ghul, train THAT KID to be Robin, get "killed" by Darkseid", during which time Dick becomes Batman, return from "death" to found Batman, Incorporated, become Batman again, and see Damian killed.....it's too much, too fast. DC rebooted, but they cling to every event that ever "mattered", and try to shoehorn it into this new continuity, and it's a mess. They should have cut the cord cleanly. Instead, they courted new readers, but wanted to have their cake and eat it, too, by telling the old readers that everything that they loved still happened in this new universe. And DC continues the odd practice of trying to incorporate what seem to be back-up stories into the main story in their collected BATMAN editions....These back-up stories dwell on things that were glossed over in the main story, but....since the same guy is writing them, and they appeared in the same issue...why not just make them a part of the real story to begin with? It's jarring to read about a press conference that ends with Bruce Wayne getting attacked, get to a cliffhanger, and then, inexplicably, be back at the press conference, this time getting Bruce's full speech from before the attack. It's weird. It might read better in the final print version, but the digital ARC that I'm reviewing has no buffer between the two stories....they flow into one another with no warning.

The good? Yes, there's good, and a lot of it, if only old crabs like yours truly can finally get past the reboot and admit that the stories that he spent thousands of hours and thousands upon thousands of dollars reading no longer matter. Snyder does some fine storytelling and world-building here, picking bits and pieces of Batman lore and plot points and incorporating them into this new origin. This is very cinematic stuff, and would make a great origin film when Warner Bros. inevitably reboots the Batman film franchise with someone younger than Ben Affleck in five or ten years. The origin story takes place in a more innocent time for Bruce Wayne, so it's much more open and colorful...we're not yet in the "Dark avenger of the night" phase yet, so we get a lot of bright blues and yellows that make Greg Capullo's art really pop in a way we haven't yet seen on this title. Snyder and Capullo nail the climactic showdown at A.C.E. Chemicals, too. We knew all along where we were going, but it's still a thrill to finally arrive at the destination.

BATMAN, VOLUME 4: ZERO YEAR- SECRET CITY is a beautifully-told story, and left me eager to see the conclusion. I'm still not sold on "THE NEW 52", but I do understand that the world that I grew up reading is done and gone...I have to either get on board, or get the hell out of the way, because "THE NEW 52" seems to be here to stay.


Posted by The Crabby Reviewer at 3:18 PM