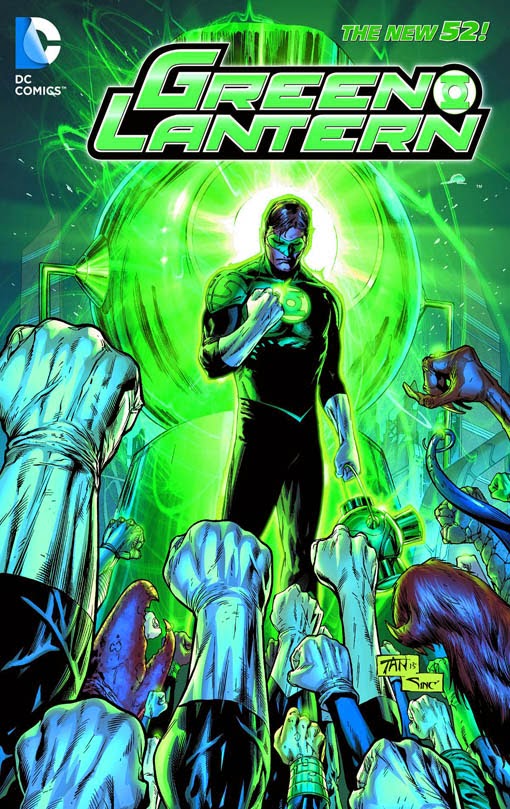 GREEN LANTERN gets a fresh start with writer Robert Venditti and artist Billy Tan...Can they make the Emerald Knight shine bright once more....?

Good news and bad news: The good news is that Venditti and Tan do an admirable job of rebuilding from the destruction that Geoff Johns left them to deal with. Venditti has a crisp, fast-paced writing style (It doesn't hurt that he also has a great sense of humor that elicited more than a few laughs from me.), and Tan delivers the huge sci-fi that GL fans have come to expect.

The bad news: This is more of the same breathless, epic "Highest stakes possible!" storytelling that Geoff Johns has been telling in the pages of GREEN LANTERN for over a decade. The action NEVER...STOPS. The book goes from trouble to trouble, fight to fight, set-piece to set-piece, leaving the reader no time to catch their breath, and leaving the characters to time to interact outside of the constant, grinding battles. This also leaves no room for a supporting cast...the best we get is Hal Jordan's girlfriend, Carol Ferris, who is also super-powered and gets to hang/bicker with Hal in space. One of the things that I enjoyed when I was a kid was seeing how The X-Men interacted around the mansion, seeing how Peter Parker attempted to deal with the friends and job that he was constantly running away from in order to fight crime...without the down-time, the stakes don't seem as high. Johns, by the end of his looooong (Overlong.) run, had given us seven or eight different (Fill-in-the-color) Corps, each populated by thousands of warriors, each with an infinitely powerful weapon. Who the eff is going to beat these people? No one. So they fight, they fight, they fight and fight and fight...(Sorry, Itchy & Scratchy.) Johns just got through having them fight a giant, all-powerful guy, so what does Robert Venditti do...?

Have them fight ANOTHER giant, all-powerful guy. This time it's some guy from before the creation of our universe, who insists that the various Corps' use of the light spectrum is killing our universe, just as it did his. He turns out to be right, but not until everyone fights a lot, and there's YET ANOTHER "NEW 52" CROSSOVER!!!!!!!!!!!!!!! Enough, already!!! GREEN LANTERN, VOLUME 4: DARK DAYS only collects parts one and five of said crossover, and while I didn't feel like I missed much, what I did miss really affected the story. How the hell does DC expect anyone to follow this new, pristine, unencumbered by decades of continuity universe of theirs, he asked with his tongue firmly in his cheek? Good luck, new readers that don't exist! (I guarantee you that the exact same people, give or take a few, are reading "The New 52" as were reading "The Old Whatever-The-Hell-Number-It-Was".)

Venditti does do a little bit to dismantle the overwhelming amount of Ring-wielders that Johns left him, which can only be a good thing. I have to admit that his new status-quo left me curious to see what he does next. I'm not sure I'd be willing to pay to see it, but...we'll see.

Posted by The Crabby Reviewer at 10:16 AM